During the first SAFETY4SEA Conference in Singapore, Mr. Richard Dias, Regional Technical Manager for International Registries (Far East) Limited, which provides administrative and technical support to the Marshall Islands Registry, talked about port State control (PSC) from a flag State perspective, noting that there is a balance between the flag State’s role of providing service and enforcing regulations.

The Marshall Islands Registry finds PSC to be very beneficial and we do take into account a lot of the information available including PSC findings. However, the key question is: Is PSC considered your friend or foe? If we consider three factors, transparency, communication, and cooperation, I think we would find that PSC can be our friends.

Transparency means that we all should be a bit more open and not be afraid of deficiencies. Things always happen on a ship, things may go wrong and we need to bring it to the notice of the port State, the flag State, Class, etc. An example of this is when a PSC officer goes onboard, even though they have reporting systems, before they start their port State inspection, they always ask the Captain, “Captain, do you have anything to tell me?” They give this last lifeline and if you take this lifeline, and if you respond honestly, you would save a lot of trouble and probably a detention.

Similarly, with communication, sometimes when the port State goes on board, the master or the crew may be a bit nervous, but they need to break the ice. Sometimes they should go to the PSC officer and say, “can we have a small opening meeting?” More or less, they discuss the inspection and, even at the end, they can ask for a small closing meeting to discuss the deficiencies rather than sign the paper and then say,  “oh no it's not like that, it wasn't like this.” So, a little bit of communication does help.

And, finally, cooperation. We find that, the PSC officer is quite human in nature and you need to get to know them better. So you need to, sometimes, arrange meetings with them or even attend seminars where there is some interaction and exchange. And, a combination of all these three factors can help to understand PSC better, to work closely with them, and provide and avoid this definition of treating them as an enemy. One of the good points of PSC is that they do recognize the responsibility and the effort that ships take. Ships that do not have too many deficiencies, do not get detained. At the same time, they do also notice what poor management is and they give a chance, or they use it to improve the management of those ships.

We also use benchmarks from the United States Coast Guard (USCG) and the Paris and Tokyo Memorandum of Understandings (MoUs). We can use their findings and we can also use those findings to benchmark who are good operators, bad operators, good ships, or bad ships. So, some of the information is very useful. Turning around to the flag State, we, generally, as in our flag State, use the acronym QCV which stands for quality, compliance, and value. Of course, we like to have a good quality and we like to have our ships compliant. But with value, it is important for flag to provide some value also when we go onboard for inspections.

Furthermore, we need to have a balance. PSC will enforce regulations but with us, we need to offer a service as well as enforce the regulations. When our inspectors go on board, they should have a positive and a productive influence on the behavior of the crew. We also believe that we should be managing risk, more than just carrying out an inspection. And finally, I would say that whether it's a port State or a flag State intervention, it is, basically, something to help the ship to get back on track towards compliance.

In our fleet, we have around 4,500 ships and 34% of those are bulk carriers, but when we look at detentions, 64% of the detentions are on bulk carriers. So, that's something that you need to see if you are a bulk carrier or dry cargo operator. These ships are more prone to detentions and it's not just our statistics, but you would find that on most of the MoUs. And when we looked at the top five detainable items, fire safety was at the top, followed by ISM, environmental or MARPOL compliance, life-saving and navigation. If you look at any MoU figures or maybe your own statistics within your company, it is possible that you will find the same five categories, maybe in different order.

But since we have fire safety as number one in our fleet, I would just give you a few examples of these deficiencies. And I think because it's a broad topic from fire prevention, protection, suppression, detection, it can be a big topic. So, the first one is the fixed firefighting CO2 system. As you know, most of these flexible hoses should be renewed in ten years but we don't need to wait for ten years if the condition is something like this. This is a very common deficiency that we find. Another one is similar; the fixed firefighting system in new building vessels where they were not installed correctly. All the hoses are mixed up and part of the reason is the clamps securing the bottles were not tight, they were not checked on board. During the voyage, they shifted, and you end up with all the tubes mixed up and the ship got detained.

On the lower left picture, is also a fixed firefighting system from a new building vessel that made a maiden voyage from Japan to Australia. PSC went on board and they found a whole bunch of CO2 cylinders with the bottle caps on. And, when they questioned the ship, they said, no sir, the shipyard was very good, they gave us a spare set of cylinders. But I think, no shipyard is so kind and, actually, they weren't connected, they were left out and the ship got detained. Similarly, on the on the lower right, the safety pins in the CO2 bottles have been left in and there's a small tag, that is saying, please remove after installation. So, not only was the pin left in, but the tag was left in, as well, which was a straight pointer to the PSC to detain the ship. 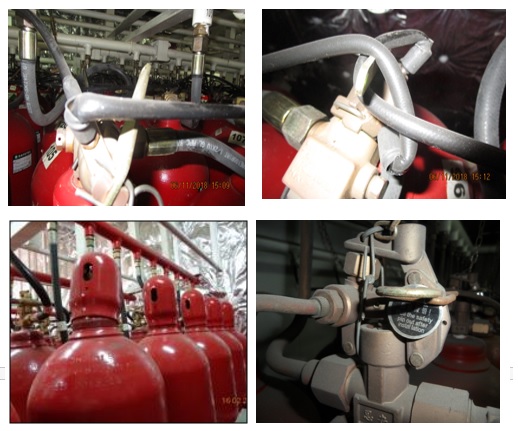 Quick closing valves are inspected carefully too. As we all know, the USCG has zero tolerance for this. And you can see a gag put in, on the picture, which was a halfpipe put in to block it. Many Chief Engineers are faced with the decision to have a blackout or to have a fire. They choose this option, which is quite wrong, and they choose to block the quick closing valves. So, this is something, that just one quick closing valve block, can be one detention. Fire detectors, smoke detectors covered up with plastic, also are detainable items. One smoke detector, amongst maybe fifty, can lead to a detention. You don't have to have all covered up, just one can lead to a detention. 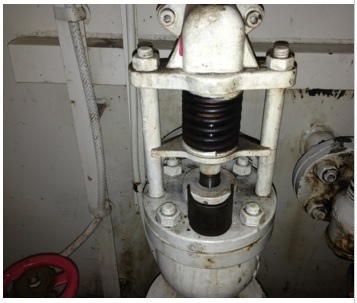 So, we do talk to owners, operators, and the crew during our inspections. We do regulate on a daily basis, talk to Classification Societies, and exchange ideas on how to solve problems. We engage with P&I clubs for their input as well. And, we have a lot of exchanges with the port State; we consider them, good partners. Finally, we can say yes, we have to learn to say no sometimes to the operators and we can say that they may not always get what they want, but will get what they need.

Above text is an edited version of Mr. Richard Dias’s presentation during the SAFETY4SEA Conference in Singapore

Mr. Dias joined International Registries, Inc. (IRI) in April 2007, and is currently the Regional Technical Manager. Prior to this he spent 15 years at sea, sailing with Denholm Ship Management Ltd., rising to the rank of Chief Engineer. He then spent another 15 years ashore with Denholm Ship Management Ltd. and Anglo-Eastern Ship Management Ltd in the capacity of Senior Superintendent. Mr. Dias holds a Marine Engineer Officer Certificate of Competency Extra First Class from the UK Department for Transport. He is a registered Chartered Engineer with the Engineering Council, UK and was elected Fellow of The Institute of Marine Engineering, Science and Technology (IMarEST) in 1995. He currently serves on the Committee of The Hong Kong Joint Branch of RINA &IMarEST.