During the 2020 SMART4SEA Athens Forum, Andreas Chrysostomou, Chief Strategy Officer, Tototheo, presented the concept of data sharing platform and the importance of collaboration between all the shipping sectors.

Currently, all shipping companies are striving to make their ships more efficient and more streamlined to the realities of today. Although everybody is trying to improve the ship efficiency not too much attention is paid on the efficiency of the port call.  Where further efficiencies can be achieved.

Apparently, we do not have everyday all ports operating as much efficient as we want, or they do not share the information we would like to have. On the other hand, the ports don’t have the information required by the ship; when the ship arrives, whether it is delayed or when it will not arrive at the port at all.

What I’m trying to say here is do we know what time the ship will arrive? What do we know about the ship that left the upstream port or what time it is arriving to the downstream port? Can we share the information?

What we see in the picture below is something called PCS; That’s a port community system. 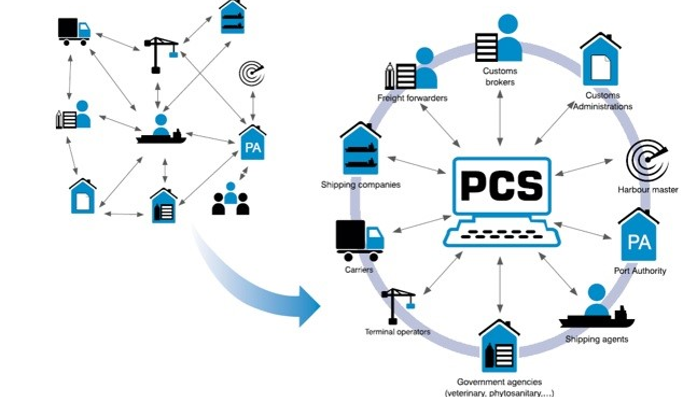 The port itself knows exactly what is going on in its port community. Does that information relate to the ship? Not usually.

There are some sectors which have better information about the port situational awareness, such as the cruise industry which I know very well and also the container industry.

When it comes to the rest of shipping, that information becomes cloudy, and not even real-time. It’s very important to see on a web page the time of arrival or the estimated time of arrival of a ship. But, is that real time or is something that has been said a few weeks or months ago?

Who has access to it? Obviously, who ever is at the port, they might have access, if the port authority allows access to the port community system. Only the port has control over the situational awareness.

Is there a better way?

In our opinion, yes there is a better way. There is nothing wrong of sharing timestamps. Data sharing Platforms can provide Shipping companies with the tools and analytics to do just that by allowing:

I agree with the Chief Executive of Alibaba saying that the experts are for yesterday and not for tomorrow; We don’t know what the future holds. At least, looking of historical data you can predict up to certain certainty what can be the norm of tomorrow.

How can we achieve that?

Concerning the PCS, we have a platform of sharing information, but it does not extend beyond the boundaries of the port. You need to continue the information to reach the ocean and from there to reach the shore office.

Therefore, we need an optimal data sharing platform, which operates on universal standards or an open platform with no international standards and everybody can come in and translate accordingly, but then you can understand you might have chaotic information coming back to the regulators which at the end of the day will like to evaluate this kind of situation.

You need to have

Why a data sharing platform?

Keep in mind that they IMO has already roll the ball that the ports and the ships and the flag states and the ports have to collaborate to bring just in time.

The ultimate goal is to ensure performance comparison to overall shipping.

As a First step Terminal – shipping company integration will happen and then it will become more global.

Then, you have port-to-port communication. Don’t forget that it happens directly, which is expensive and on the other hand it might not be direct for everybody in the web. But, through an exchange like a data sharing platform you can get access to ports that US might not really have a connection before.

Don’t forget that by sharing platform, by sharing information business intelligence can be created. That doesn’t mean it’s to the detriment of someone, but you can use the information to evolve yourself or the company.

Of course at the end of the day you can create analytics and another thing where the IMO is heading now through the Global International Industry Alliance and the port call optimization group, they try to create aggregate statistics to find out analytics and then propose a way forward to optimize the fleet and the port interaction.

I don’t believe that this platform stops only at the cruise and containership industries. The rest of the sectors as we’re approaching 2030 and 2050, we have to do as much as possible on the reduction of CO2 to achieve the 50% reduction in aggregate.

Above text is an edited version of Mr. Chrysostomou’s presentation during the 2020 SMART4SEA Athens Forum.

Mr. Chrysostomou is a seasoned professional in the shipping industry. He holds an MBA (Master’s in Business Administration) and he graduated from the University of Newcastle upon Tyne, UK, with a Bachelor of Engineering in Naval Architecture and Shipbuilding.

Mr. Chrysostomou, in his long-standing career, before joining Tototheo Maritime as CSO, was the Director of the Department of Merchant Shipping, (the Maritime Authority of Cyprus), CEO of Transmed shipping Co. Ltd. And Act. Secretary General of CLIA Europe.

He also held senior management roles in fields such as safety and security, protection of the marine environment and administration. He also served as the elected Chairman of the Design and Equipment Subcommittee of the IMO and of the Marine Environment Protection Committee (MEPC), one of the main Committees at IMO. He was twice elected and re-elected Chairman of the International Mobile Satellite Organization and served as member of the Board of Governors of the World Maritime University (WMU). He also served as President of the Institute of Marine Engineering, Science & Technology (IMAREST).

Mr. Chrysostomou’s skills and integrity have been acknowledged by peers, by awarding him the 2011 Award for Outstanding Contribution to Sustainable Shipping. In November 2011 he has also been presented with the Distinguished Public Service Award by the United States Department of Homeland Security, United States Coast Guard, for his invaluable service to International Shipping and in 2013 the GST Award - Leading Shipping Personality of the Decade 2003 - 2013. Furthermore Mr. Andreas Chrysostomou was awarded The Lloyd’s List Greek Shipping Award - “International Personality of the Year” 2015.