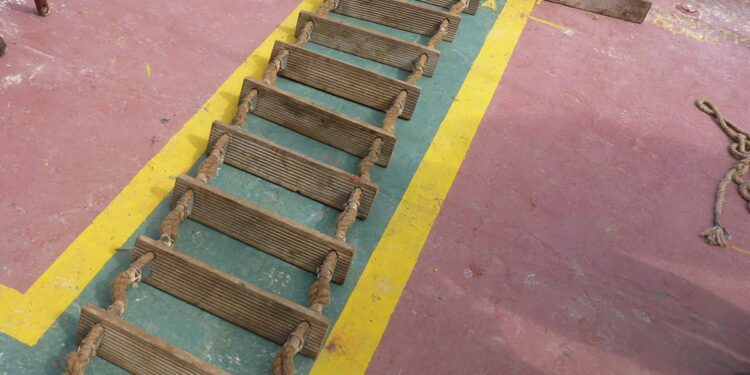 For a Marine Pilot, embarking and disembarking a ship is a challenging task. Pilot ladders is a simple and inexpensive way to embark and disembark a vessel at sea; however, many pilots are still being injured whilst embarking ships. Safe pilot transfers are the result of cooperation between vessel management and the pilot.

Marine pilots and pilot transfer arrangements provide best practices to ship operators in order to meet statutory requirements. This is an issue of high attention, considering that many defects have been identified during last years. In that regard, the International Maritime Pilot Association (IMPA), representing the international community of pilots, conducts a safety campaign annually with the objective of reporting pilots’ experiences of ladders and boarding equipment to the IMO and the wider shipping community.

All vessels should conduct safe and proper boarding arrangements and pilot operations by ensuring that there are adequately maintained equipment and good procedures onboard.

During 2020, the campaign received 6,394 reports from pilots operating across the world. In the spotlight of this year’s campaign was the death of two pilots, whilst attempting to board vessels using combination ladders. Broadly in line with previous years’ findings, 12.11% of arrangements were reported to be non-compliant with combination ladders and pilot ladders having the most defects by both number and percentage.

EMSA: Key tips for the safe carriage of AFVs in RO-RO spaces

In 2016, IMPA’s Pilot Ladder survey draw industry’s attention to the defects that pilots encounter when boarding and disembarking vessels, identifying the following defects:

As part of IMPA’s annual safety surveys, in 2019, Fidra Films developed a series of informational and educational films to illustrate the dangers and also best practice. The film series seeks to reduce the incidence of non-compliant ladder arrangements, something that pilots face every day of their working lives. The development, production and distribution of this series was sponsored by DNV GL, GasLog, Intertanko, Northern Marine, PTR Holland, The Standard Club and Stolt Tankers.

Based on the campaign begun on Twitter a couple of years ago by @Valpilotboat using the hashtag #dangerousladders, the film brings together a number of highly experienced pilots and pilots’ representatives to create a resource based on the premise that if a ladder arrangement is non-compliant, it is not safe.

The Bahamas Maritime Authority issued a safety alert which outlined the following key issues for consideration, based on IMPA’s results during 2020:

Based on 2020 results, The Bahamas Maritime Authority highlights the following common defects and provides explanation why these do not comply with Pilot Transfer Arrangements best practices:

#1 Use of deck-tongue: If weight is momentarily removed due to swell or interaction with the launch the ladder, and pilot, may be lost. Weight of ladder (and user) is on a single step, which may not have sufficient strength to comply with loading requirements.

#2 Ladder rigged over railings: Pilot needs to climb over railing or manoeuvre sideways to reach opening in railings, increasing risk of falling. Railings are generally not certified to comply with loading requirements.

#3 Ladders secured to deck fittings: Vents, sounding pipes and other non-load tested fittings are not certified to comply with loading requirements.

#4 Ladder reel on winch brake only: Ladder not secured to a strongpoint independent of the winch. Increases risks due to single point failure.

#5 Incorrect set-up for freeboard: Combinations with too much (or not enough) climb from water level to accommodation ladder platform (maximum 9m, minimum 1.5m) increase risk of injury.

#7 Unsafe platform: Stanchions are required on both sides of the accommodation ladder’s platform to allow safe transfer and reduce risk of falling.

#8 Accommodation ladder on winch brake only: When the ladder is not secured to a strongpoint independent of the winch it increases risks due to single point failure.

#9 Non-compliant trapdoor system: If the ladder does not run through the platform it increases difficulty to climb and therefore risk of falling. When the ladder is not attached to the hull independently of the accommodation ladder it increase risks due to single point failure. Trapdoor openings should be of a sufficient size to allow safe passage.