During a three-month period, started on 1st September 2019 to 30th November 2019, Paris MoU, along with other MoUs and PSC Authorities, conducted a Concentrated Inspection Campaign, on Emergency Systems. Although, the Paris MoU has not issued any report yet, key findings are available on its Inspection Database which we analyze in this article. During the CIC period, a total number of 4,336 inspections conducted, resulting to 9,968 deficiencies and 134 detentions.

The purposes of the CIC were to ensure that:

The results provide a picture of the deficiency types that mainly affect ships been inspected at ports under Paris MoU, during the CIC. The 5 most common deficiencies regarding the emergency systems are listed on the table below (Table 1 – Deficiency Breakdown). There should be mentioned that survey had been conducted with data received from Paris MoU inspection archive taking into consideration every ship inspected at Paris MoU ports from 1st September – 31st November 2019 without bearing in mind details as ship type, age of vessel or flag administration.

For a total number of 944 deficiencies “Muster List” is the item mostly recorded, i.e. in about 198 records. This could be attributed to the fact that in most cases,  Muster List remains incomplete, even though is required to be completed and crew members should be aware of its existence and familiarized with their duties. It was also indicated that Muster Lists are not being updated accordingly. In some cases, PSC officers reported that the Muster List was missing, or it was not readable, or crew members were not adequately trained or familiarized with this.

The third deficiency category is the “Emergency Source of Power – Emergency Generator” with 112 deficiencies concerning this item of defect described as “not required” and in some cases this emergency systems had been “inoperative” or “not properly maintained”.

Fourth most frequent deficiency category seems to be the “public address systems”, as during many inspections these been found “inoperative” by the PSCO.

The last one on the list of the 5 most common deficiencies but less recorded than the first 4 item, is “Fire Drills” category which is mostly caused by inadequate training of crew and inefficient knowledge of seafarers.

Furthermore, the aforementioned Emergency System’s’ deficiencies marked during the CIC can be distributed to 3 main categories: 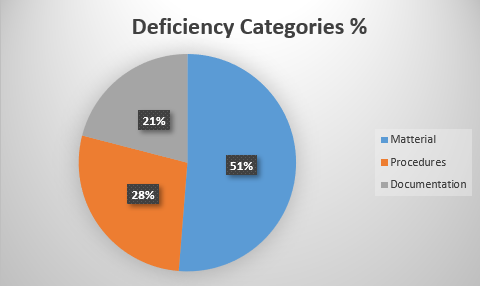 The data provides us sufficient information about the fields that seem to be more problematic when it comes to the management of vessels and crew performance as well. The nature of deficiencies as these have been reported during CIC reveals a serious inability of crew in monitoring related issues that demand close and immediate supervision of function, maintenance and reporting of ship’s emergency systems with a high percentage of total deficiency number – 60,4 %- to show problems in monitoring.

Usually the absence of adequate maintenance of vessel’s equipment may cause several malfunctions at the emergency systems and it is inevitable such inadequacies not to be highlighted during PSC. The fact that the 27% of deficiencies is referred to inadequate maintenance, confirms the theory that the good working condition of the emergency system equipment is an issue of high importance speaking of PSC side.

The rate of deficiencies for a lack of training, skills or knowledge is approximately 12,6%, a number not as high as deficiencies related to procedures or maintenance (see Graph 2 – Root Cause Categories). 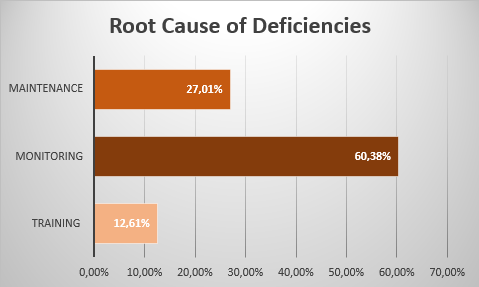 In any case this survey rings the bell to operators and crew members about fields which should be improved in any way, concerning the appearance of emergency systems and the approach from Paris MOU PSC. It is clear that any improvement of the monitoring and maintenance of emergency systems should be conducted with more attention and effectiveness. Moreover, the training that is provided not only to vessel’s crew but also to crew ashore who support the whole process, should be developed accordingly in order to be more efficient and fulfill the needs of several situations.

Data as shown in Paris MOU inspection lists help us observe some important issues. It is interesting to be noted that “Fire Drills” is the most detainable item even though this is fifth in the list of most common reported deficiencies. “Emergency source of power” and “abandon ship drills” have the same number of detentions during three months of this survey. There are following deficiencies related to items “emergency fire pump and its pipes” and “Crew familiarization with emergency systems”. Detainable items shown with a lower frequency in the archive of Paris MOU is the category “Enclose Space Entry” and “Rescue drills” with 6 reported incidents of detained ships during the three-months period. Other two deficiencies been reported as detainable with 4 and 3 detentions were “Public address system” and “Functionality of safety systems”. A lower number of detentions occurred because of problems detected in “Muster Lists” while the item with the less detentions during those three months was a category concerning the “emergency steering position/ compass reading” which is the last one showed up in the list of detainable deficiencies as presented  on Table 2 – Most Common Detainable Items. 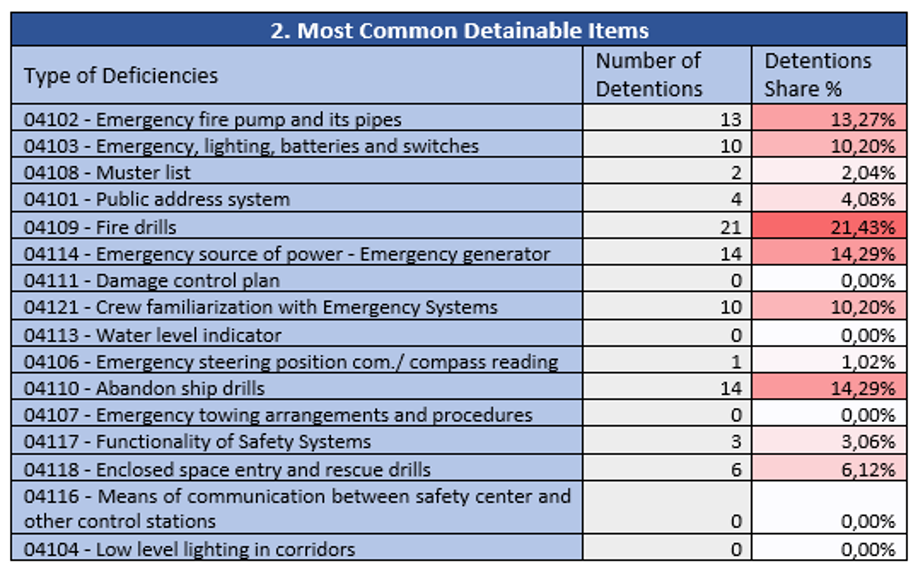 As we proceeded throughout the analysis of deficiencies before, we can also categorize detainable deficiencies in three categories: material, procedures and documentation, in order to come up with some interesting conclusions. This categorization identifies that the most common detainable items are related to the category “procedures”. It means that PSC of Paris MOU focus on problems and procedure inadequacies rather than the maintenance of material equipment of vessel (see Graph 3 – Detention Main Categories). The approach tries to eliminate problems from its roots understanding that a lack of maintenance hides some deeper and more serious problems that come from inefficient training, total absence of supervision or incapable managerial manipulations. 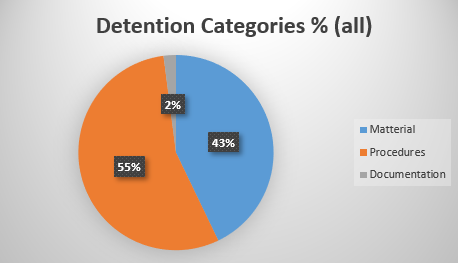 Emergency Systems are items of high importance ensuring ship, crew and environmental safety during emergency situations. This fact makes it crucial for the crew to periodically check and maintain accordingly for the emergency system functional condition. The data of survey should be used by operators as a lead factor for improvement of performance, bearing in mind that crew should be trained to constantly maintain vessel’s condition, be familiar with its functions and would also be adequately aware of how to use, complete and update the related documentation, which is important not only because it is required but also because this would be helpful to monitor the condition and the functionality of the emergency systems. Last but not least, under no circumstances should the safety drills be omitted, as their objectives are the alertness of crew, always under an effective and continuous supervision.