by Mark Dickinson
in Opinions, Seafarers 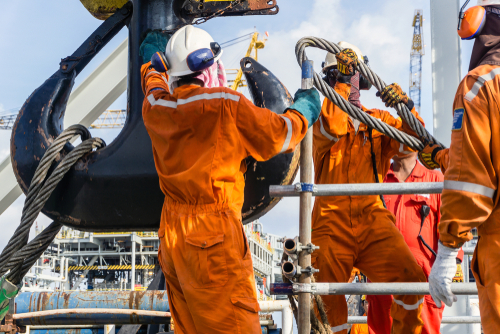 In an exclusive interview to SAFETY4SEA, Mr. Mark Dickinson, General Secretary at Nautilus International outlines the key challenges and opportunities of the pandemic, urging for more action for the acknowledgement of seafarers as key workers.

Among others, Mr. Dickinson notes that the crew change crisis has both exposed and exacerbated issues around seafarer fatigue. Therefore, tackling fatigue should be on top of industry’s agenda in order to not only to retain trained seafarers but also attract the workers of the future.

SAFETY4SEA: In light of shipping currently being at the heart of a humanitarian crisis, what are the key priorities of Nautilus International for the maritime industry? How does your organization continue to push for safe crew changes?

Mark Dickinson: We recently launched Build Back Fairer, a campaign focussing on what the future of the maritime industry should look like as we begin to recover from the pandemic. One of the campaign’s key asks is for the key worker designation to be adopted by all states, and to be implemented in a coordinated way. Despite a welcome United Nations General Assembly resolution in December 2020, only 58 states have so far informed the IMO that they have designated seafarers as key workers. In others, the key worker status was granted in name only and barriers have continued to be placed in the way of seafarers being able to exercise their fundamental rights.

As a trade union, our approach for continuing to push for safe crew changes is multifaceted. We have pushed for coordinated international action and we have also consistently lobbied the governments in the UK, Netherlands and Switzerland for action to address issues that impact our members. Alongside this, we have of course also assisted our members with individual cases throughout, some of which have involved working with a range of bodies in order to secure repatriation.

S4S: What are the key challenges of this pandemic crisis for the shipping industry? Do you see any opportunities?

M.D.: The challenges that the pandemic has thrown up for our members and the sector are too vast to fully explore in this answer. From the huge impact on cruises, many of which have been simply unable to operate throughout, to the crew change crisis, which his still ongoing – the next few years are absolutely critical for the industry. One key challenge is going to be the recruitment and retention of staff. It’s impossible to overstate the impact that the crew change crisis and other issues will have had on those who were impacted, and the result is that a whole generation of seafarers will be asking themselves again whether this is really the career for them.

However, I also believe that the pandemic has created opportunities in two key areas. Firstly, because it significantly increased the profile of seafarers and the maritime industry and exposed some of the longstanding issues that we have been working to resolve, such as the deficiencies of flags of convenience. Secondly, there has been a welcome focus on seafarer wellbeing and mental health, issues which have been hugely impacted by the crew change crisis. Long overdue conversations have been taking place across the sector and we have already seen significant investment into mental health provision. The focus on this issue needs to continue as we begin the long road to recovery from Covid-19.

M.D.: It was extremely encouraging to see that the wider network of stakeholders and organisations beyond ship owners – charterers, finance, investment houses, technology companies – are recognising that they have a role to play in guaranteeing and ensuring seafarers get their rights. The next step, as acknowledged in the Declaration itself, is that there needs to be a conversation across the industry about the resilience of the maritime supply chains in the light of Covid-19. The bodies which signed up to the Neptune Declaration need to take steps to ensure that this grouping is not just a one-off occurrence. To put it simply, once we get beyond the immediate problems, we need to take the necessary steps to ensure that the issues that were faced cannot happen again. The industry as a whole needs to learn the right lessons, and the point Nautilus is making through Build Back Fairer is that this cannot happen unless the structure and governance of the industry is looked at again.

S4S: How ship operations and life onboard will actually change with the acknowledgement of seafarers as key workers? Where do you see room for improvement from all the stakeholders involved?

M.D.: In terms of room for improvement following the key worker designation, the starting point should be the 20 April joint statement from the European Transport Workers’ Federation (ETF) and the European Community Shipowners’ Associations (ECSA), which sets out a list of rights that should be applied to seafarers as key workers – drawing on the universal rights set out in the Maritime Labour Convention, 2006. This is the starting point of properly defining what we mean by the key worker designation. The next stage is to make sure the key worker status is adopted by all states and implemented in a coordinated way. Finally, the status must be enduring, meaning that the rights will apply to any future national or international situations that may arise, to ensure that goods continue to flow without seafarers.

S4S: The increase of COVID-19 in India is currently a new alarming issue. How could this disrupt ship operations? What does industry need to do to protect itself from further harmful implications?

M.D.: The emergence of new variants and outbreaks is deeply concerning because it leads to further restrictions being imposed by states, often at very short notice. Until vaccination is widespread globally, which could take a number of years, we could continue to see issues with crew change being experienced. The Neptune Declaration was an example of the kind of step that the industry will have to continue to take to push for the key worker status to be adopted and respected globally.

S4S: In light of the COVID-19 impact on seafaring, what do you think is the most important issue/topic/element for improving crew welfare?

M.D.: The crew change crisis has both exposed and exacerbated issues around seafarer fatigue. The working practices long accepted by the industry of seafarers working 91 or 98 hours a week are completely unsustainable. A recent report by the World Maritime University also found widespread malpractices in the recording of work and rest hours with a culture of adjustment – both on and off ship – normalising fatigue among seafarers. If unaddressed, seafarer fatigue represents a ticking time bomb that could lead to serious casualties, loss of life and environmental damage. It also has a serious impact on the wellbeing and mental health of individual seafarers. As we look to retain trained seafarers and attract the workers of the future, we need to create a race to the top in international regulations – that needs to start with tackling fatigue.

Mark Dickinson is currently serving his third term as general secretary of maritime trade union Nautilus International and has held the position since the union formed in May 2009, following the merger of Nautilus UK and Nautilus NL. Mark oversees the Nautilus mission to be an independent, influential, global trade union and professional organisation, committed to delivering high quality, cost effective services to members, and welfare to needy seafarers and their dependants. Mark Dickinson has spent over 40 years in the maritime industry, which began when he joined the British Merchant Navy as a Navigating Cadet in 1978 at the age of 16.