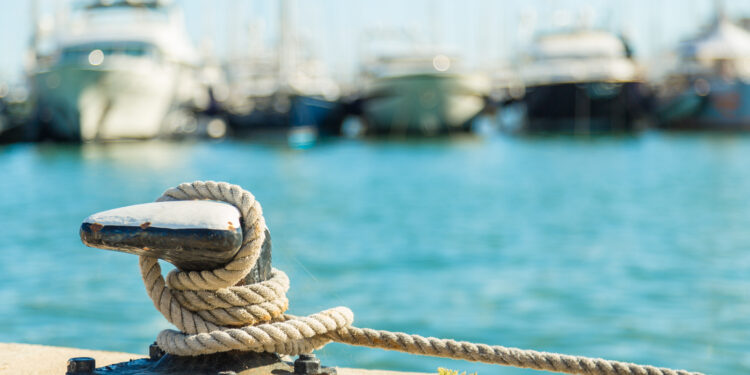 The fourth edition has been extensively updated and addresses: Lessons learned from incidents, most notably from failures of HMSF mooring lines; Human centered mooring designs and human factors in mooring operations; New and in-development regulations and guidance from the IMO on the safety of mooring; Alternative mooring technologies and how they can be incorporated into the design of mooring systems both for ships and terminals. In essence, the new guidance addresses key questions raised by operators since the third edition, which was published back in 2005.

The ship design MBL is the core parameter against which all the other components of a ship’s mooring system are sized and designed with defined tolerances. Nylon (polyamide) mooring lines should be specified as break tested wet because nylon lines change strength characteristics once exposed to water and generally do not fully dry to their original construction state.

Line Design Break Force (LDBF): the minimum force that a new, dry, spliced mooring line will break at when tested according to appendix B of MEG4. This is for all mooring lines and tail materials except those manufactured from nylon which is tested wet and spliced. This value is declared by the manufacturer on each line’s mooring line certificate and is stated on a manufacturer’s line data sheet.

As outlined in appendix B, when selecting lines, the LDBF of a line shall be 100-105% of the ship design MBL. The LDBF for nylon (polyamide) mooring lines should be specified as break tested wet because nylon lines change strength characteristics once exposed to water and generally do not fully dry to their original construction state.

Working Load Limit (WLL): the maximum load that a mooring line should be subjected to in operational service, calculated from the standard environmental criteria. The WLL is expressed as a percentage of ship design MBL and should be used as a limiting value in both ship design and operational mooring analyses. During operation, the WLL should not be exceeded.

Line Management Plan (LMP): it is used to manage the operation and retirement of mooring lines and tails. The LMP also documents the requirements, assumptions and evaluation methods used in determining the line retirement criteria.

Mooring System Management Plan (MSMP): this is ship specific and complements the ship’s safety management system. Through a ‘goal-based’ approach, core elements of the mooring system are identified against which high level ‘goals’ are established supported by more detailed ‘functional requirements’.