MEPC 76: What is in the agenda and what should we expect 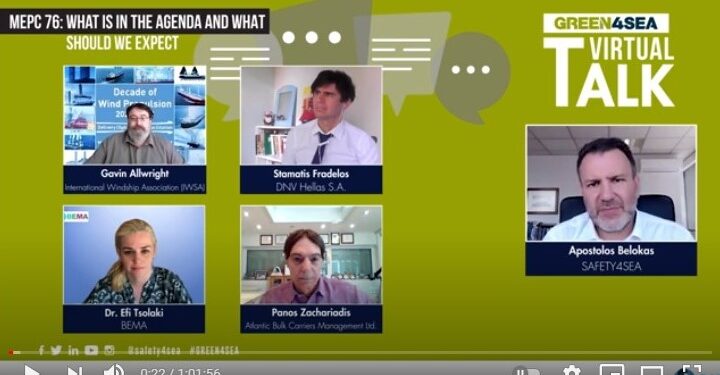 IMO MEPC 76 is scheduled as a remote meeting from 10 to 17 June 2021 with key items in the agenda, including GHG work in progress with an eye on MBM proposals plus pending issues from previous MEPC 75 and new submissions on ballast, energy efficiency, HFO ban, EGCS and other green topics. Several stakeholders are building their arguments and summing up their submissions trying to achieve momentum ahead of this important meeting. In light of the above, a recent GREEN4SEA talk explored the expectations and key highlights of the forthcoming IMO Committee.

Initially, commenting on what is at stake during MEPC 76, Panos Zachariadis, Atlantic Bulk Carriers Management Ltd, highlighted the issue of the GHG reduction, as well as the discussion on the short term measures of EEXI and CII. In addition, a potential carbon levy, wind power propulsion and the life cycle assessment alternative fuels, are also considered as important topics.

The remote nature of this MEPC could mean not fast progress, as a huge amount of work is to be one. MARPOL amendments are expected to be adopted, while there is some interest on submissions on BWMS, the proposal of the EU on discharge water and scrubbers, as well as reports on EEDI

As for Dr. Efi Tsolaki, President BEMA, BWMS will definitely be a highlight of the meeting, as there are about 40 submission on ballast water. However, she urged that:

Clear directions are needed, as well as the development of guidance and good practices from invasive species

Dwelving more on a matter that Mr. Fradelos added, the remote nature of the meeting presents pros as well as cons. All the panelist agreed that “at least the meeting is taking place”, however that comes with many disadvantages.

Continuing the vivid discussion, the panelists later shared their views on the short term measures for GHG reduction, and specifically the CII and the EEXI.

CII and EEXI will be a burden. Ideally there should not be that much regulation, but rather a serious levy on fuel. Now, the effectiveness of these two measures in doubt, with EEXI not considered that much of a big burden, but CII could become a huge burden, as it’s very dependent on various factors

On the same wavelength, Mr. Allwright added that more clarity is necessary, in order to clear up any uncertainty.

There is a plethora of actions to be taken, and many operators don’t know what to do. EEXI is providing an incremental change, sending a message to take action, but we must bare in in mind that wind propulsion can maintain high speeds

Another extremely important topic of discussion, is the potential of a carbon tax. According to Mr. Zachariadis, the point of such a levy is to spark a discussion on the effectiveness of alternative fuels. He noted however, that in order for that measure to succeed, a level playing field is required.

Moreover, Mr. Fradelos is of the opinion that the levy is progressing, gaining more and more support from shipping. Nevertheless:

A robust study for the effectiveness of the levy must take place, as well as a proper impact assessment

Specifically, Dr. Tsolaki said that process has been slow until now, but that does not mean that there are not ways to make it efficient in a practical way:

Operators must share their experiences. This will eventually lead to improvements in technology, advancing the legislative procedure, and bringing changes faster to the market

This is an opinion with which Mr. Allwright agrees with, also noting that the early adopters of new technologies must be protected.

Importantly, says Mr. Fradelos, “IMO must move forward fast”, but also have in mind the most important aspect, which is safety.

New fuels and new technology coming into market must match today’s abilities. We must be careful and hurry up risking safety

Concluding the discussion, all of the panelists shared their views on what they expect as a minimum from this MEPC.

Mr. Zaxhariadis expected the EEXI and CII to get approved, which as he said, is “not necessarily a good thing”.

I expect the short term measures to be finalized, while a MARPOL ban on heavy fuel oi in arctic could also move forward

Focusing on ballast, Dr. Tsolaki expects more progress on clear directions for ballast operations, but explained that finalization is going to take time.

EEXI will move forward, while there will be more clarity about the CII, and hopefully progress on the carbon levy. As for wind propulsion, there is a growing appreciation to bring wind into the mix of propulsion solutions