Life on board more attractive to male seafarers, survey reveals

Maritime industry is widely considered to be a male-dominated profession. Looking at the numbers of male and female seafarers, this hypothesis is true, as women seafarers are less than 2% of seafarers worldwide. Most importantly however, women seafarers are also significantly less happy than their male coworkers. Why is that the case though? In this article we will examine the reason of women seafarers’ unhappiness, and the factors that push women away from shipping.

According to latest studies, today women make up for less of 2% of seafarers worldwide. This is also confirmed by a recent study conducted by SAFETY4SEA. The survey gathered responses from a total of 9,768 seafarers. The female participation in the survey amounted to just over 1%.

Focusing more on female seafarers, the study showed that the most satisfied female seafarers are Deck Officers, aged between 26 to 35, onboard gas tankers aged 0 to 5 years. The satisfaction level of this group is 97.5%.

The less satisfied female seafarers are Engine Ratings, of age group 46 to 55, onboard bulk carriers of age between 6 to 10 years old. The satisfaction level of this group is just 25.3%.

Based on a study by IMHA, ITF, ISWAN and Seafarers Hospital Society, it is estimated that 1-2% of the world’s 1.25m seafarers are women, serving on some 87,000 ships, mostly in the cruise sector. 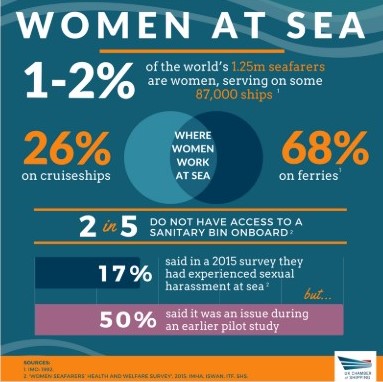 The research suggests that women seafarers face discrimination and that there are areas where women seafarers’ specific needs are often overlooked. Health is likely to be one such area.

According to ITF Seafarers, once employed, women seafarers may face lower pay even though they are doing work equivalent to that of male colleagues. A recent ILOSTAT analysis showed that the median gender pay gap for 115 countries with available data is 14% in favor of men, while male-dominated occupations have even higher wage premiums for men.

Latest EU data also showed the gender pay gap stands at 16%, meaning women work around 2 months for free each year, compared to men. These figures have only changed minimally over the last decade.

What is more, women may also be denied the facilities or equipment available to male workers, which is a form of discrimination.

However, there are two specific problems that women seafarers face, that are of outmost importance.

Bullying and harassment are problems for male and female seafarers alike. Such unacceptable behaviour may come from colleagues or managers, and are known causes of ill health.

Despite the fact that these are issues that many workers workers face, they can be a particular problem if you are employed at sea, where you are isolated from family and friends and other sources of support.

Sexual harassment is typically defined as:

Unwelcome or uninvited behaviour of a sexual nature that is offensive, embarrassing, intimidating or humiliating

This does not mean that males are immune from sexual harassment, but the majority of reported cases regard to women seafarers.

If a woman becomes pregnant and wish to take maternity leave, her rights will differ, depending on where she works.

Namely, if a woman seafarer is sailing under the flag of her own country, she will be covered by that country's legislation, and any rights guaranteed under her union's collective bargaining agreements.

If she works on a Flag of Convenience vessel, she will be covered by the legislation of that flag state – which might not give any maternity rights at all.

The timing of the repatriation may vary depending on where the seafarer works and her stage of pregnancy. Where the ship is trading coastally, or where a doctor is on board, it is generally safer for pregnant women to work later into a pregnancy. However, if working on deep sea vessels or very high speed craft, the risks need to be assessed carefully.

As it can be understood, maternity could be a key constraint leaving women behind on pursuing seafaring careers.
Today, pregnancy testing is widespread for women seafarers before going onboard, mostly in the cruise sector. Of course such a practice violates ILO’s Maternity Protection Convention of 2000.

What is more, ILO has reported that in case of pregnancy of women seafarers, responds may vary from disembarkation at their own expense, offers of transfer to shore-side employment or permission to keep working onboard.

At the moment, a total of 88 countries have ratified MLC Convention (2006), of which 54 provide maternity benefit under their social security protection.

4 reasons why women do not choose maritime

As said above, women seafarers account for less than 2% of the seafarers worldwide. Whike the aforementioned problems contribute greatly to lowering the numbers of women seafarers, there are 4 key reasons why women do not choose maritime as a carreer:

Careers in the maritime industry are not very well known to many young women, as there are no attempts to promote shipping as a prosperous career. In addition, schools do not take the initiative to facilitate discussions about maritime career options.

To tackle this, educators could promote awareness to students regarding pursuing seafaring as a career. In addition, institutions of higher education should have policies to help women understand and know about maritime careers better.

Female seafarers consider that there is little chance of advancing in this field. In fact, they feel that they will face many difficulties such as performance pressures or a hard time moving up in the company.
For this reason, companies should ensure an equal representation of women in the maritime industry and give them equal opportunities. Moreover, companies should ensure equal pays, and protect women from sexual discrimination.

The lack of maritime workshops and seminars is another reason for less women seafarers. Such seminars could help women know more about maritime, and establish a strong presence in the sector. Furthemore, organisations could provide mentoring, thus pushing more women in the industry.

Lastly, job security is a very important factor. As the majority of the employees, women prefer jobs with a stable source of income and a planned retired life. While, shipping can provide great employment opportunities, the lack employment equality has been a critical problem for the industry.

To solve this problem, drastic measures should be taken, in order to enhance policies supporting women’s welfare.