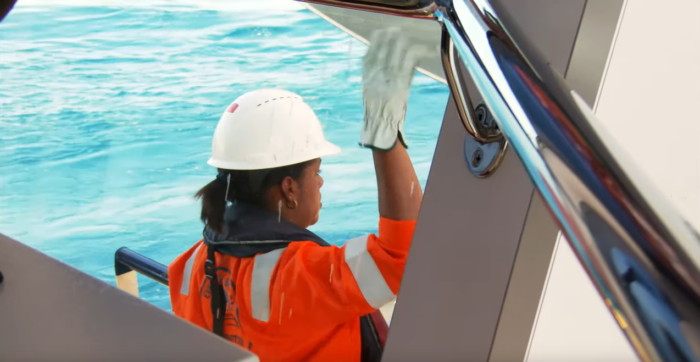 Similar to their male co-workers, women also feel isolated or lonely at sea. This may be exacerbated if they are the only woman onboard or they face gender-based discrimination due to forming part of a male-dominated industry.

SAFETY4SEA Crew Wellness Survey of 2019 showed that female seafarers were generally less satisfied than males. Meanwhile, a survey by IHMA, ISWAN, ITF, and Seafarers Hospital Society to 595 female seafarers in 2015 identified joint/back pain and anxiety/stress/depression as the two biggest health challenges that half of the respondents faced.

ILO data also indicate that women seafarers face more other concerns, such as the risks associated to women’s sexual health, confidential access to a ship’s doctor, and few opportunities to seek medical advice or treatment ashore.

It is a sad truth that men account for a significantly disproportionate part of the shipping workforce, mostly onboard. Current data want women accounting for just 2% of shipping crews globally.

As such, it is expected that the whole culture of a ship is a reflection of masculine values. Common technical difficulties of such situation is that uniforms, helmets, boots and other critical life-saving equipment may not physically match a female body.

Working in oversized boots is not only dangerous for everyday working tasks onboard, but also an indication of an unwelcome environment adversely affecting a female seafarer’s mental health.

Companies should make sure the equipment onboard is fit for purpose for any seafarer. This will pave the way for everyone onboard to stop taking for granted that they will never have a woman working onboard along with them.

ILO data reveal an estimated 40% of female seafarers do not have access to sanitary bins onboard ships.

In addition, Nautilus recently said that some of its member female seafarers pack their menstrual products in their own luggage to last the duration of their trip, to ensure they have enough with them when onboard.

Disposal of used items is also an issue as ship toilets normally cannot handle it. As such, women seafarers normally have to put them in bins which then get disposed of in port and often at a cost.

Women require access to feminine sanitary items and discreet disposal mechanisms. Female hygiene products could be sold on ships through bonded stores, and toilets should be equipped with sanitary disposal bags or bins.

A great deal of discussion surrounds maternity as a key constraint leaving women behind on pursuing seafaring careers.

Of the 88 countries which have ratified MLC Convention (2006), 54 provide maternity benefit as part of their social security protection.

Despite violating ILO’s Maternity Protection Convention of 2000, pregnancy testing is widespread for women seafarers before going onboard, mostly in the cruise sector.

According to ILO, responses to pregnancy of women seafarers may include disembarkation at their own expense and offers of transfer to shore-side employment or permission to keep working onboard.

“Maternity harassment” after returning from maternity or parental leave is another regular phenomenon.

Maternity protection and childcare provisions enable all seafarers to have families and remain part of the workforce. In this regard, shipping companies should focus more on pregnancy and maternity protection, in the form of wage, flexible working arrangements, benefits maintenance during maternity leave, not being afraid of dismissal and not being downgraded from a certain post.

Perceptions who want such jobs to be meant only for men comes with stereotyping that women are incompetent to do a man’s job, they won’t like getting their hands dirty and much more.

Upon entering in a man-oriented environment, women may often have to work harder in order to “prove themselves” or to seek acceptance and be seen as able to perform their job, ILO suggests.

The gender pay gap, is the most significant part of gender discrimination across all business sectors and maritime included. A recent ILOSTAT analysis showed that the median gender pay gap for 115 countries with available data is 14% in favor of men, while male-dominated occupations have even higher wage premiums for men.

Latest EU data showed the gender pay gap stands at 16%, meaning women work around 2 months for free each year, compared to men. These figures have only changed minimally over the last decade.

Myths around the gender pay gap

When regulation fails to ensure an equal remuneration for both sexes, companies should be the first to alleviate the gender gap and promote gender equality and empower women. The first step is to understand and accept that more women can bring a positive change to the industry’s overall efficiency.

Of course, payment is partly the problem for women hesitating to pursue a career at sea. In a publication on gender equality in shipping, ISWAN, WISTA and Anglo-Eastern cited harassment and mostly, sexual harassment, as key forms of discrimination a woman can encounter while at sea.

Sexual harassment is typically defined as “unwelcome or uninvited behaviour of a sexual nature that is offensive, embarrassing, intimidating or humiliating.”

These behaviors are typically driven by the establishment of a male-generated culture, linked to the very tradition of this male-dominated industry.

Rather than the actual problem itself, the issue of underreporting of such cases makes the problem even worse. By hiding the problem under the carpet, the industry becomes unable to address it. Women seafarers who are sexually harassed are often reluctant to file a complaint because they are afraid that they will be socially and professionally tainted or that they will lose their job.

There is a need for increased knowledge and use of policies that allow a complainant to report cases of sexual harassment without fear of negative consequences. Policies aimed at eliminating sexual harassment could be conveyed through pre-boarding training or onboard safety meetings.

The shipping sector has yet to prove progress on its work to gender diversity. Social fights globally have accomplished a satisfying level of awareness on women’s rights. Meanwhile, technological developments have led to less physical labour on the part of seafarers, as physical tasks have been mostly taken over by automated systems. This allows women to perform tasks that were once deemed too physically strenuous.

What is left is a change of mentality of shipping itself in order to be more friendly for more women onboard, in line with a greater discussion surrounding the importance of equal women presence for business sustainability.