Key challenges of maritime piracy in the COVID-19 era 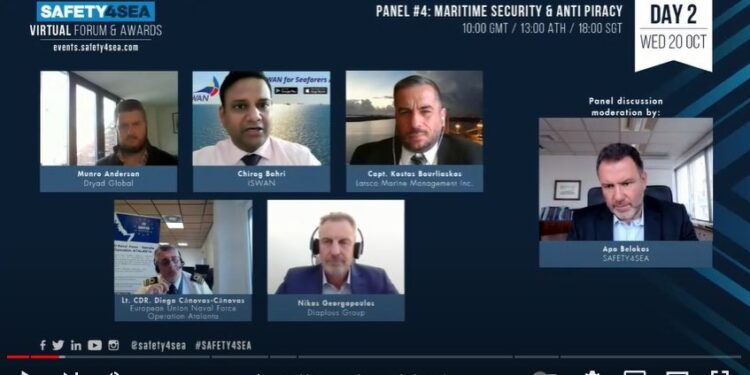 During the 2021 SAFETY4SEA Virtual Forum, Panel 4 discussed about maritime piracy in the era of COVID-19. The panelists shared their thoughts the current regulatory framework to mitigate piracy risks, as well as what they believe are the key challenges concerning maritime security, and how could the industry improve reporting of the undetected illicit activities.

Beginning the discussion the panelists agreed that COVID-19 has of course affected shipping, meaning that piracy has changed its ways as well. More specifically, Munro Anderson, Dryad Global, Founding Partner, explained that:

Challenges are finding a way to take place around hot spots, especially since there are problems in effective regulation

EU worried about imminent expiry of anti-piracy operation off Somalia

If we do not have good info share network, we cannot control some areas effectively, and that means that piracy there will be more prevalent

Of course, if COVID-19 has taught us something, is that health must be a priority, and that is where Capt. Kostas Bourliaskos, Latsco Marine Management Inc, CSO, also focuses on. As he noted, there are many challenges in ensuring crew’s health, especially when private maritime security comes onboard.

You cannot always be sure about whether the crew from these companies are tested when embarking, so segregation between them and the seafarers is necessary

This is an opinion that Nikos Georgopoulos, Diaplous Group, Chief Business Development Officer, agrees with. As he stated, shipping must ensure the health of seafarers, as well as a good service to customers. For this reason, companies must adapt in the new environment, and test their crew.

Malacca Strait and the Strait of Singapore report high numbers of piracy attack, but their severity is almost always low. They include minor thefts, in comparison to Africa piracy, where seafarers are getting kidnapped

Another area of a particular interest is the Indian Ocean, according to Capt. Kostas Bourliaskos. As he mentioned, in that area risks arise due to the Iranian navy, while the threat in the Gulf of Guinea comes mainly from local activity.

We have to adapt to new type of attacks, as pirates expand their activities to other areas, where there is no protection

…this is a very important problem according to Mr. Georgopoulos, as these new areas have no specific regulations for piracy, and in many occasions, private security companies cannot board the ships, like in Benin.

Remaining in the Gulf of Guinea, Chirag Bahri, ISWAN, Director of Regions, highlighted that currently the trend is changing, as incidents are taking place far from coast:

New piracy hotspots are emerging, where the proper procedures are not established, meaning that ships transiting through these areas are not well prepared

To help seafarers in case of a piracy incident, Mr. Bahri said that there are helplines offering emotional support. There is also free guidance on how companies can deal with affected crew and their families, as well as programs on how to prepare a vessel and the seafarers mentally during an attack.

Continuing, Mr. Cánovas-Cánovas explained that successes from the past have helped greatly in order to deal with piracy today:

The past has taught us that we should develop a different relation with shipping and navy, while private maritime security companies are vital in order to deter piracy

From his side Mr. Georgopoulos claimed that a focus on a risk management approach can be proven very beneficiary. More specifically:

As to what shipping has to expect in the future piracy-wise, Mr. Anderson said that while piracy numbers in Africa are dropping, it is too early to link it with the Nigerian Deep Blue Project:

To make that correlation I would expect to see Nigerian navy deter pirates, capture pirates, prosecute pirates, which is not happening now

Capt. Bourliaskos agreed with Mr. Anderson, adding that as far as the Indian Ocean is concerned, not many changes are expected within the next 12 months.

However, Mr. Cánovas-Cánovas warned that:

We have drivers ashore in the Western Indian Ocean for piracy to persist. Somalia also drivers and links between illicit activities. Right now we are fighting against the symptom. As for the West Africa, Nigeria has significant steps forward, but there is still much to do

On the other hand, Mr. Georgopoulos does not expect many changes in the Indian ocean, but warned that political tensions in that area are important. As for Africa, he expects incidents to expand to other areas as well, such as Togo, Cameroon, Equatorial Guinea, and further. For this reason, preparation is of utmost importance to protect seafarers in the greater area in Gulf of Guinea.

Nonetheless, no effort will be successful if it is not supported by a sound legal framework, said Mr. Cánovas-Cánovas:

Legal framework lays the foundation for good action. We don’t have enough countries implementing international law in their local law, while legal fines are also important

Capt. Bourliaskos also placed emphasis on the importance of fines, saying that:

Piracy is an opportunistic crime. If the pirate knows the fines are not harsh, piracy will continue. It is not strange pirates do not attack EU flagged vessels because of the fear of a lifetime sentence

Of course, shipping must also consider the ISPS Code and whether its current edition is fit for purpose, noted Mr. Anderson:

Currently there are problems with implementation, while the ISPS makes no provision for interaction with hostile state militaries. Another area of concern is that of cyber security, which is not accommodated enough

Finally, MR. Georgopoulos stated that the current regulatory environment is complex, as it has to combine local regulations with international law.

We have to identify hidden risks, and ensure the international law complies with local laws. The problem with West Africa is that they have their own law, and is not easy to have only one document to implement in all countries. We have to find a way to persuade those countries to sign one document that applies to all of them

Explore more in the following video: