Hydrogen as the fuel of the future: Key considerations for shipping

by The Editorial Team
in Fuels, Maritime Knowledge 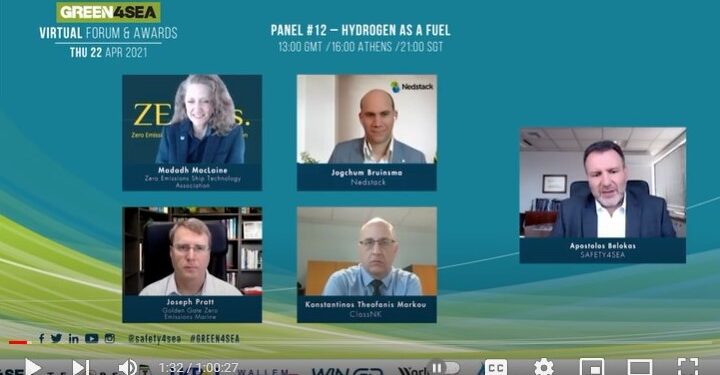 Hydrogen is building momentum globally as the probably the cleanest of all fuel solutions for the future; in that regard several shipping players have recently issued a joint letter to the EU Commission urging to promote the use of green hydrogen by ships as part of its upcoming maritime fuel law.

Sharing their opinion on the viability of hydrogen as an alternative fuel for shipping, Panel 12 of the 2021 GREEN4SEA Virtual Forum, discussed on its market momentum and success stories, explaining on the same time its competitive strengths and weaknesses against other fuel options.

Taking the above into consideration, Madadh MacLaine, Secretary General, Zero Emissions Ship Technology Association, noted that in the last decade we have seen “an uptick in hydrogen vessels”:

North Sea is seeing an uptick in hydrogen bunkering projects, with three project currently active and three more under production

However, she added that the biggest challenges of hydrogen are the large sea going vessels. As she mentioned, ICCT has done a study for a route from US to China looking at containerships, and have found that all vessels on that fleet could transition to liquid hydrogen. Another issue would be the cost of hydrogen, for which Ms. MacLaine said that:

The problem is that we are looking at high renewable energy green hydrogen projects at pilot stages. When we get to 2030 we will have achieved a levelized cost of hydrogen

Going forward, we can be assured that there will be market based measures, but we do not know “what and how much,” with Ms. MacLaine also providing four reason why green hydrogen is the only future maritime fuel.

Continuing on the same wavelength, Joseph Pratt, CEO/CTO, Golden Gate Zero Emissions Marine, started off by assuring that: “Hydrogen enables zero carbon and zero pollution operation.” Nevertheless, in order for shipping to fully achieve a smooth transition to hydrogen, there are four main aspects that need to be in place:

As for the cost of hydrogen, in comparison to other fuel types, Mr. Pratt stated that:

Hydrogen and fuel cell are the only ones that the cost is decreasing. Fuel cells’ cost is coming down due to mass production and as the cost of renewable energy decreases, the cost of hydrogen also decreases

Furthermore, regarding zero emissions, Mr. Pratt noted that hydrogen is the only way to do that. Moreover, as far as the weight of hydrogen is concerned, operators should bare in mind that it is not a “huge difference with existing solutions.” Nevertheless, there is a difference between liquid and gas. The difference is that with gaseous hydrogen a ship can only make one one-way trip, while with liquid hydrogen, the same ship can make up to five trips.

Commenting a little bit more about fuel cells, Jogchum Bruinsma, Project Manager Maritime Power Systems, Nedstack, believes that they can provide zero emission solutions for vessels. To overcome the hurdles that fuel cells are presenting, shipping is working on concept designs to “find out what to do when applying fuel cells on a vessel.”

according to Mr. Bruinsma.

Adding on what Ms. MacLaine said, Konstantinos Theofanis Markou, General Manager, ClassNK, provided the pros and cons of hydrogen, which include:

Nonetheless, a very important feature for the adoption of fuel cells is the development of specific guidelines. As Mr. Markou noted:

IMO has developed such guidelines, however their original schedule has been pushed back due to the COVID-19 pandemic. Namely, interim guidelines would have been finalized during September 2020, and they would have been approved during MSC104

As for the content of the guidelines, they provide criteria for fuel cell power installations regardless of the type of fuels, which could be hydrogen, reformed gas, etc. Nevertheless, legislation is currently an issue for the uptake of hydrogen.

Questioning about the challenges that legislation presents, Mr. Markou stated that:

We are in the process of developing relevant regulations, but the truth is that we are facing delays. These delays have also delayed our experiences for setting up the framework for fuel cells, in order to proceed to wider use of them as a propulsion means. I believe that relevant regulation will be in place by mid-2022

Moreover, Mr. Bruinsma added that once legislation is in place for fuel cells, hydrogen will be next in line, as now there are not any specifics on this fuel. Nevertheless, he noted that the alternative risk based design method, “enables us to start today and prove that we are equivalently as safe to what is there now, and is also part of regulations to use this method.”

On the other hand, Ms. MacLaine noted that some operators are moving away from the alternative design route and is moving towards a goal based approach, “which is making this move a bit faster.”

In spite of the fact that we do not have a regulation in place, we are able to move forward and the information gathered at these projects can be fed into that regulation, assuring that it accommodates all of the innovations as they come forward

Explore more in the following video: