The shipping industry has long been under discussions on finding low carbon solutions for a more sustainable future while IMO’s decision on reducing GHG emissions from ships by 50%, compared to 2008 levels , by 2050 – as adopted during MEPC 72 last year, set a specific target towards decarbonization. However, the EU seems to have different future plans, as the newly elected European Commission President, Ursula von der Leyen, proposed a carbon-neutral Europe by 2050, changing what has been known until today and what the shipping sector has been aiming to.

During her opening statement in the European Parliament Plenary session, she added that a two-step approach is needed to reduce CO2 emissions by 2030 by 50%, if not 55%.

The EU will lead international negotiations to increase the level of ambition of other major economies by 2021, ‘because to achieve real impact, we do not only have to be ambitious at home – we have to do that, yes – but the world has to move together.’

I want to reduce emissions by at least 50% by 2030. However, to achieve real impact the world has to move together.

She continued that currently the shipping sector has a goal of 50% emissions reduction by 2030; However, this should change, given the fact that the EU aims to be a carbon-neutral continent, so the efforts should be rapid and fruitful to be able to achieve the carbon-neutrality goal.

Also, during her speech in Strasbourg, she highlighted that environmental protection is “our most urgent task”. To better support her plan, she proposed a ‘Green Deal’ for Europe, meaning to convert parts of the European Investment Bank (EIB) into a climate bank to unlock €1 trillion of investment over the next decade.

Europe must lead the transition to a healthy planet and a new digital world. But it can only do so by bringing people together and upgrading our unique social market economy to fit today’s new ambitions.

In essence, the new European Commission President brings major changes to shipping industry, having both supporters and those who expect to see the actions of her words. For example, Tiemo Wolken, Social Democrat, and member of the European Parliament commented that he is not sure where Van Der Leyen’s aim will lead, adding that her proposals missed suggestions. 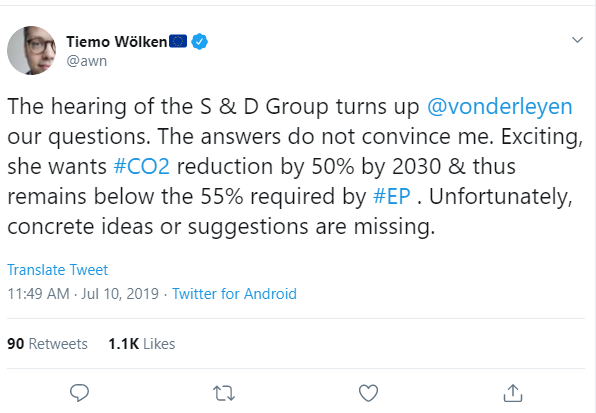 IMO’s initial strategy aspires to reduce the total annual GHG emissions by at least 50% by 2050, compared to 2008, while also pursuing efforts towards phasing them out entirely.

The strategy includes a specific reference to “a pathway of CO2 emissions reduction consistent with the Paris Agreement temperature goals”.

In general, the final decision was a compromise between the 70-100% emission cuts, targeted by Pacific Islands and Europe, and the 50% by 2060 proposed by Japan and other states.

The final decision however enjoyed almost unanimous support from the parties.

Namely, the ambitious targets announced by the new EU President highlight the urgent need of a sustainable future. By proposing the EU to reduce its shipping emissions by 100% by 2050, she aspires to achieve carbon neutrality which is in conflict with IMO’s target, that sees a 50% cut in GHG emissions by that time. So far, the interested parties have applauded the new proposal while others are held back, as time will reveal the development and evolution of the new goals. Now it remains to be seen how industry’s stakeholders will react to this new reality and what IMO will discuss in the upcoming Committees in order to keep align with EU’s new vision towards decarbonization.

I believe that what is good for our planet must be good for our people, our regions and our economy. We will ensure a just transition for all.