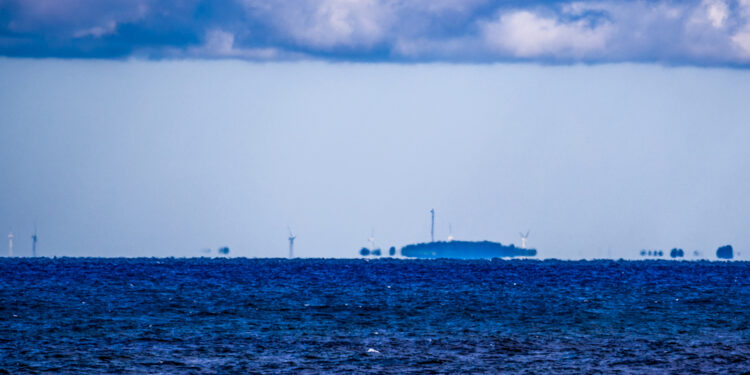 Fata Morgana of coastline with wind turbines on it / Credit: Shutterstock

Legends and superstitions are a common phenomenon in shipping, an industry with roots lost in the centuries, but some of them come along with rational explanations. Surely, you have heard of haunted vessels or ghost ships, but have you ever heard of the legendary ‘Fata Morgana’?

What is Fata Morgana?

A Fata Morgana is a complex form of superior mirage that is seen in a narrow band right above the horizon. A Fata Morgana may be seen on land or at sea, in polar regions or in deserts.

Book Review: How justice can strengthen trust in any organization

At sea, this optical illusion can give the impression that a ship ‘floats’ over the water or in some other cases, the mirage may also comprise several inverted (upside down) and erect (right side up) images that are stacked on top of one another.

Fata Morgana is encountered only in distant objects, so it can also trick our eyes into seeing objects that do not really exist.

Why does Fata Morgana occur?

The optical phenomenon occurs because rays of light are bent when they pass through air layers of different temperatures in a steep thermal inversion, where an atmospheric duct has formed.

A thermal inversion is an atmospheric condition where warmer air exists in a well-defined layer above a layer of significantly cooler air. This temperature inversion is the opposite of what is normally the case; air is usually warmer close to the surface, and cooler higher up.

As it becomes understood, the Fata Morgana is a meteorological, rather than a supernatural phenomenon.

Where does Fata Morgana occur?

For example, the Fata Morgana observation could occur in the morning hours after a cold night, resulting in the escape of heat by radiation into space. This is a common occurrence in high mountain valleys, such as the San Luis Valley in Colorado where the phenomenon is magnified by the curvature of the valley bottom that compensates for the curvature of the Earth.

In addition, it is likely to be observed in the Arctic seas, during calm mornings or often on the ice-covered plains of Antarctica.

The mirage is also often seen in the Strait of Messina, and this is why the Italic version of the term is most widely known.

“La Fata Morgana” is the Italian term for “The Fairy Morgana”. The name comes from the medieval English name Morgan le Faye (Morgane, Morgain or Morgana), who was a fairy in Celtic mythology as well as a powerful witch in the Arthurian legend. The name of this phenomenon has its roots in the belief that these mirages were fairy castles in the air or false land created by her witchcraft to lure sailors to their deaths.

Fata Morgana has triggered maritime myths and superstitions, such as the appearance of the Flying Dutchman, a ghost ship, the fate of which is to never anchor in port, being doomed to set sail forever in the open seas. The legend has it that the ship glowed with a ghostly light.

According to the legend, if hailed by another ship, the crew of the Flying Dutchman was said to try to send messages to land, or to people long dead.

There are different versions for the Story of ‘The Flying Dutchman’. In the most common version, according to Britannica, the ship’s captain, Hendrick Van der Decken, gambles his salvation on a rash pledge to round the Cape of Good Hope during a storm and so is condemned to that course for eternity.

Where are you coming from? From Babylon.

Where are you going? To the eye of the cyclone.

Whom do you love? A Gypsy maid.

What is her name? Fata Morgana.