by Raptis Sotiris
in Opinions, Ports 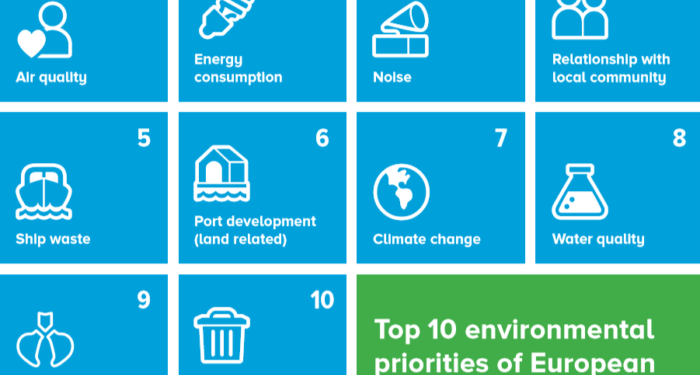 Sotiris Raptis presents the ten key priorities of European ports toward a more sustainable management, according to the latest environmental report published annually by ESPO. One of the findings that is worth noticing is that air quality, which was not an issue back in 1996, it is now in the agenda remaining a first priority since 2013.

Over the course of the last three years, the UN countries concluded and ratified the Paris Agreement, the IMO decided to introduce the global 0.5% sulphur cap on marine fuels in 2020 and agreed on a target to reduce CO2 emissions from shipping at least by 50% by 2050. In parallel, a new EU regulation on air quality was adopted and European authorities are taking more initiatives to enforce the existing ones.  European ports are at the frontline taking initiatives to further protect the environment, improve public health and address the challenges of climate change.

Air quality, energy efficiency and noise have been already their top three environmental priorities since 2016 with climate change in the Top 10 for the second year in a row. The findings also indicate the readiness of the sector to address marine litter with waste the top priority monitoring issue since 2013.

The ESPO Environmental Report 2018, which presents the annual European port sector’s environmental benchmarks, is based on the data of those ports that are members of the EcoPorts Network. A set of environmental performance indicators have been analysed and the results are shown in the Report. The data was obtained from the responses of 90 European ports to the EcoPorts Self Diagnosis Method (SDM), a tool developed for identifying and monitoring environmental risk and establishing priorities for action and compliance. The SDM is updated by EcoPorts’ members every two years.

The first three priorities have been the same since 2016, while air quality has remained the number one priority of the European ports since 2013. This may be read together with the advance of the relationship with local community in position 4 of the list as air quality has been increasingly a concern for citizens of port cities and urban areas in general. Every year, air pollution causes about 400,000 premature deaths in the EU and hundreds of billions of euros in health-related external costs. 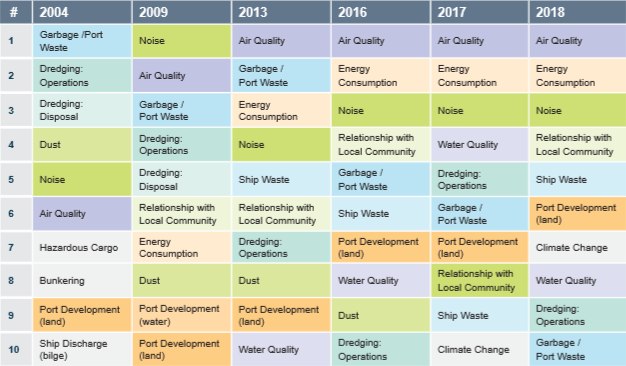 Energy consumption, which is also emissions related, remains the second priority issue of the European ports. Since 2013, energy consumption has been placed in the top 3 issue for European ports. One of the reasons for this may well be the direct link between energy consumption, and the carbon footprint of the ports and climate change. Mitigation and adaptation to climate change appeared in the Top 10 for the first time in 2017 in the last position and has climbed to the position 7 in 2018. Climate change effects are already considered seriously by the contributing ports, which are starting to act to adapt to its effect and to fulfil the objectives of the Paris Agreement.

Noise remains the third priority and its importance has also grown since 2004. This is also related to the next priority, the relationship with the local community. Port-city issues are remaining of high relevance for European ports and this is reflected in the development of the Top 10 in the last years.

More than half of the ports are providing OPS stations. The most significant result is the high voltage OPS, since in general this is the one required for the commercial seagoing vessels. However, it has to be noted that energy taxation on electricity has been a significant barrier for the uptake of shore-side electricity for ships, being often the reason why it does not make a strong business case.  Currently, electricity produced from the combustion of marine fuel on board of ships is tax-exempt. However, when ships at berth plug into the shore-side electricity system, they have to pay taxes applied to electricity. A limited number of EU member states such as Sweden, Germany and Denmark have been provided under the Energy Taxation Directive with a permit to temporarily apply a reduced rate of taxation to shore-side electricity for ships.

Furthermore, offering differentiated port charges for greener vessels is a fairly widespread practice in European ports with more than half of the participant ports doing so (54%). Environmentally differentiated fee schemes aim to reward operations of those vessels that may be deemed more sustainable according to a range of selected criteria ESPO promotes for this type of initiatives in its Green Guide.

The annual ESPO Environmental Report is based on data submitted by ports to the EcoPorts network. It is encouraging that the number of ports that have got the environmental standard is going up with 34 out of the 114 EcoPorts members already PERS certified. EcoPorts enables its members to further improve their environmental performance.

In parallel, data submitted to EcoPorts enables ESPO to come up with the annual Environmental Report and port sector’s environmental benchmarks. This information is made publicly available allowing local communities, policy makers, research and civil society to check the annual progress of the sector. Enhanced transparency enables ports to do better and makes ports’ relationship with local communities stronger.

Sotiris Raptis joined ESPO in 2016 as senior policy advisor for environment and safety. He is also the coordinator of the EcoPorts network at ESPO. Previously, Sotiris worked as shipping and aviation officer at the NGO Transport & Environment being responsible for the clean shipping campaign at IMO and EU level and as MEP policy advisor on environment, transport and legal affairs at the European Parliament. A qualified lawyer, Sotiris speaks Greek and English. He studied at the University of Thessaloniki, the University of Athens and the King’s College London Centre of European Law. Sotiris was awarded European Citizens’ Prize 2008 of the European Parliament as member of “G700” blog for promoting intergenerational justice.