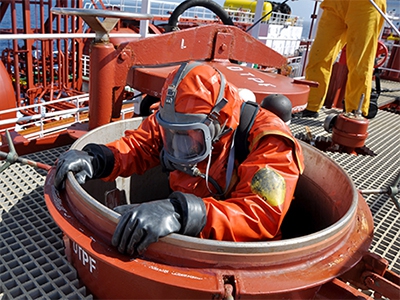 Accidents on-board happen for various of reasons; falls and slips are the most common. But what if an accident results to the death of crew member or members? This is a very different situation. Enclosed space is one of the most common reasons that result on different accidents on ship.

Many people believe that an enclosed space is always small, but that’s not true. There are many spaces on board that considered to be enclosed spaces but they are not limited in space (eg. ballast tanks). Seafarers are often ignoring the basic safety procedures and precautions when entering enclosed spaces. In many cases in the past, the person who tried to save the victim, became a victim himself.

The following accident happened on a container ship, while it was on port. The 2nd engineer, alongside with the fitter, descended to the ship’s tunnel to fix a storm valve that was leaking. They distinguished the line and they tried to fix the leaky valve. But, they ignored the possibility that the line may still have poisonous gas inside it. The moment the valve was taken out, the enclosed space they were working was filled with the toxic gas. Both passed out immediately. After a few hours, the 4th engineer, because he couldn’t find the 2nd engineer, he went into the tunnel. When he entered the enclosed space, he passed out too. After some time, the 3rd engineer informed the chief engineer that they haven’t returned yet. After taking safety precautions, like breathing masks, a team entered the tunnel and found that the three men had died from suffocation.

Safety procedures that need to be followed

In the previous accident, the three victims didn’t follow any safety procedures, neither took any precautions. Specifically, the 4th engineer had to be twice as cautious.

Following procedures and actions are to be followed in a case a victim is to be rescued from an enclosed space:

SQE Marine has prepared a detailed checklist aiming to inform about the necessary actions to be followed, in case of rescue from enclosed space.