CSMART calls for a culture of continuous professional development

by The Editorial Team
in Opinions, Seafarers 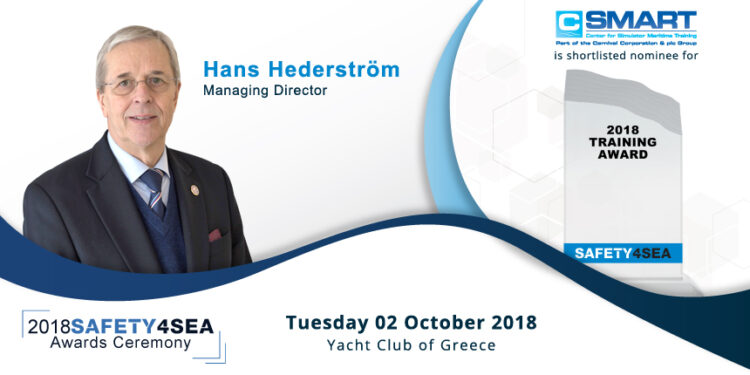 While the voting procedure for the 2018 SAFETY4SEA Awards is open, Capt. Hans Hederstrom, Managing Director of CSMART, shares a few words about the CSMART Training Centre which has been shortlisted for the ‘Training’ category alongside a number of other distinguished nominees. Taking into consideration today’s training needs, CSMART offers online distance learning tools before the actual training, bridging the gap between theory and practice. For the future of maritime training, a key challenge could be how to cultivate knowledge beyond compliance, Capt. Hederstrom mentions, due to increased operational complexity and emerging risks.

SAFETY4SEA: Your organization has been shortlisted for the 2018 SAFETY4SEA Awards in the ‘Training’ category alongside a number of other distinguished nominees. What is the background and the key drivers behind this nomination/shortlisting?

Hans Hederstrom: The key driver behind CSMART nomination is the need to go beyond mere compliance to statutory requirements and foster a culture of continuous professional development.

S4S: What are the key challenges surrounding the training of seafarers today?

H.H.: We experience the following challenges when it comes to maritime training:

• Increasing operational complexity requires seafarers to adapt to new risks and exercise professional judgements. More than ever, organizations need to identify emerging training needs and the ability to dynamically adapt to them.

• On the job training is not enough for operating ever growing ships with a high level of complexity both on the bridge and in the engine room.

• Simulators are mainly generic and does not represent the layout and equipment seafarers are working with on-board.

S4S: In what way do you believe training needs to be improved/developed/optimized in order to keep up with industry’s changing needs?

H.H.: A flexible culture needs to be fostered within the training organization relying on professionals who are able to transfer knowledge from one specific training project to the next. Moreover, training should be on an annual basis with a clear structure displaying the path from cadet to Captain/Chief Engineer.

S4S: How training in shipping could be developed to meet the needs of Generation Z?

H.H.: The needs and wishes of Generation Z are met by letting trainees use online distance learning tools before the actual training. Such a way of working makes it possible for trainees to follow their own pace and at the same time instructors can maximize the effectiveness of simulation by consolidating the link between theory and practice.

S4S: What is your key message with respect to the future of maritime training?

H.H.: The future of maritime training lies in recognizing that:

• knowledge needs to be expanded beyond compliance to statutory requirements in order to keep up with increasing operational complexity and emerging risks.

You may cast your vote for CSMART Training Centre at 2018 SAFETY4SEA Awards dedicated webpage till 7th of September 2018!

Captain Hans Hederström is the Managing Director and principal architect in establishing the Center for Simulator Maritime Training, CSMART, by writing the simulator specification and getting a team of professional instructors together. CSMART started the Bridge simulators for operation in July 2009. In 2012 the centre added a world class engine simulation facility.

Captain Hederström brings over 45 years of maritime experience to CSMART. He holds a Master Mariners (class 1) licence, a Marine Engineers Certificate from the Marine College in Gothenburg, Sweden and has sailed in all ranks up to Master.

In 1977 Captain Hederström continued his career by becoming a Harbour Pilot and later as Sea/Harbour Pilot, for 22 years, in the Port of Gothenburg with the Swedish Maritime Administration. In 1992 he became member of the development group for the SAS Bridge Resource Management (BRM) training programme, and went on to carry out BRM training courses and BRM workshop leader courses.

In 2000 Captain Hederström became a Senior Instructor and later the Director of Star Cruises Ship Simulator in Port Klang, Malaysia. In 2005 he moved to Chalmers University of Technology, Gothenburg, Sweden where he led the specification and establishment of a new Full Mission Bridge simulator. The centre started operating in March 2007 with Captain Hederström as manager/principal instructor.

From September 2008 Captain Hederstrom has been employed by Carnival Corporation.