While the voting procedure for the 2019 GREEN4SEA Awards is open, Mr. Chryson Sariyannidis, CEO, CS & Associates SA, explains why industry should think of elimination of liquid fuels and their replacement by Natural Gas. The company has been nominated in the ‘Technology’ category alongside other distinguished nominees for its involvement in studies and investigations concerning Natural Gas Transportation by sea. However, Mr Sariyannidis acknowledges that there are still barriers for the widespread adoption of natural gas as a fuel with respect to infrastructure and operation primarily for short to medium distances.

SAFETY4SEA: Your organization has been shortlisted for the 2019 GREEN4SEA Awards in the ‘Technology’ category alongside a number of other distinguished nominees. What would you like to share with industry’s stakeholders with respect to this development?

Chryson Sariyannidis: Today, it is of outmost importance for shipping to design efficient and cost effective methods for the supply of both the ships and the industry with the most environmentally friendly fuel (Natural gas).

S4S: What is the key feedback from your existing & prospective clients on the barriers and drivers towards investing into your technology?

Chr. S.: Drivers: The project has been proven to be and widely accepted as a highly competitive approach for the transportation of Natural Gas from its source to consumer.

Barriers: Current market, primarily for short to medium distances and quantities, is presently under development.

S4S: Do you have any new projects on the pipeline and/or plans that you would like to share with the rest of the industry?

Chr. S.: Yes. Preliminary designs for the storage and transportation by sea of Natural Gas in compressed form (CNG) have been completed including an autonomous CNG Carrier equipped with compressing/loading/discharging facilities, for which an approval in principal has been obtained by the American Bureau of Shipping (ABS). Furthermore, studies for the design of the most efficient and cost effective facilities of CNG storage ashore, are presently in progress.

Additionally, an agreement of a ‘Joint Development Project’ (JDP) for Natural Gas Transportation by Sea has been signed in January 2019 between: - CS & Associates SA, the American Bureau of Shipping – ABS, the National Technical University of Athens, Ariston Navigation Corp. and George Moundreas & Company SA.

S4S: If you could change one thing about the shipping industry, what would it be and why?

Chr. S.: The elimination of liquid fuels and their replacement by Natural Gas since it is the most environmentally friendly fuel from all the natural sources. Additionally, it is safer than any other fuel since it is lighter than the air and in case of a leakage the hazards are substantially reduced as it will flow high in the atmosphere. It is also to be noted that leading automobile manufacturing companies are designing vehicles to operate with Natural Gas, in addition to electricity. For a most efficient environmental protection, the liquid fuels are being gradually eliminated.

S4S: What is your key message to the industry for a more sustainable future of shipping?

Chr. S.: Use natural gas as a fuel. Apart from being the most environmentally friendly it is also less expensive.

You may cast your vote for CS & Associates SA at 2019 GREEN4SEA Awards dedicated webpage till 22nd of February 2019! 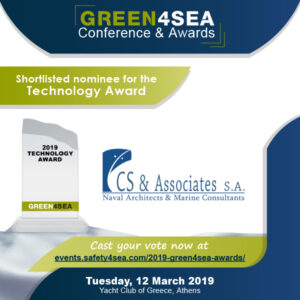 Chartered engineer of Marine Engineering and Naval Architect discipline.  He earned his academic degrees in Glasgow and Sunderland, U.K. and served a full five-year apprenticeship in Shipyards in Scotland and North England when the international shipbuilding industry was concentrated in these areas. He also served as an engineer at sea.

Held leading positions in Ship Management Companies, Shipyards and for over 34 years with the American Bureau of Shipping (ABS) from where he retired in 1993, as Vice President for Eastern Europe and the Middle East and was awarded with a “commendation for notable service”. He also continued as technical advisor of ABS until 1997

In 1994 he founded his own technical company, CS & Associates SA the activities of which can be seen at www.csassociates.gr and in which he is still the CEO.