Crew kidnapping on the rise: Trends, Perspectives and Prospects 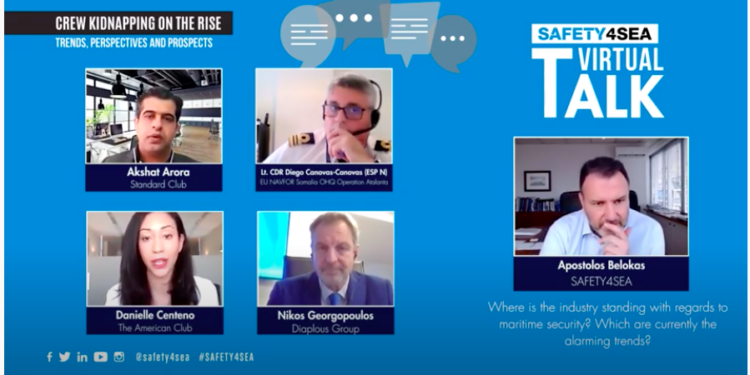 It is known that the Gulf of Guinea remains a hotspot for piracy incidents, as the latest IMB Piracy Annual Report revealed. To remind, 35 crew were kidnapped from their vessels in 2020, with the GoG accounting for over than 95% of crew kidnap numbers. Amid this crew kidnapping crisis that shipping industry is dealing with, speakers at the 2021 SAFETY4SEA Talk on security, discussed about key anti-piracy measures and the security challenges for the operators.

Among others, experts at the “2021 SAFETY4SEA Talk – Crew kidnapping on the rise: Trends, Perspectives and Prospects”, focused on the piracy attacks in GoG & the new areas of attention and the key actions towards a more security resilience industry.

“We should be celebrating the fact that we were able to deal with piracy in Somalia. Specifically, there were no any Somali-based piracy attacks reported during 2020. That has a lot to do with some of the strategies that were taken between the EU NAVFOR, armed private security teams and reporting systems that worked together to combat this issue. Therefore, we have to take a look at the Gulf of Guinea and treat it with the same urgency. As an industry we really need to bring this issue to the forefront”.

Moreover, it is observed an increase of suspicious activity in Western Indian Ocean (WIO) region, but not any piracy related events. In fact, the last piracy attack took place in April 2019.

According to Nikos Georgopoulos, Chief Business Development Officer, Diaplous Group, although the timing is different, there are some similarities from what had happened in the Indian Ocean and what is going on in the Gulf of Guinea.

“If we want to fight the piracy attacks as good as we fought them in the Indian Ocean, we have to go through the lessons learned and search the reasons why the Indian Ocean case is a win case, while the Gulf of Guinea case remains a growing problem”.

What is more, speakers considered that the industry is still far from at least control the situation, as it needs to find out the Indian Ocean’s lessons learned and examine the differences that Gulf of Guinea has.

“There is a dry season in the West Africa which typically runs from September to March. However, in the following months what I foresee is that the attacks will continue. And even though they have been several comments stating that the attacks are coming from the EU, Denmark and different countries, which is a positive step forward, this trend will carry on”.

Speaking of how to enhance maritime security within Gulf of Guinea, Ms. Danielle Centeno shared an overview of the Exercise Obangame Express back in 2015. As she explained, the exercise broke up the Coastal States into zones.

In other words, there were four or five countries to each zone, where the Gulf of Guinea Nation navies were responsible for controlling and passing information within those zones.

“I think that this model did show some success, as some numbers dropped down, but there’s still a lot to be done. Coalition navies in the area are always great and they do the job, but the navy vessels can’t always get to the incident fast enough. So, what we need is hardened vessels in order to prolong that time and a mixture of military presence in the region”.

Following the COVID-19 situation, industry experts discussed how the outbreak impacted security resilience and became a managing problem of crewmembers as well.

Namely in the case of Gulf of Guinea, Mr. Georgopoulos noted that shipping is completely depending on the Nigerian government. While it was observed that Nigeria during the first wave, was one of the worst countries in the area concerning the pandemic.

At the same time, the current piracy attack issue in Gulf waters comes from Nigeria’s status, as the government finds it difficult to be involved in this complex situation.

“The relationship between the country, the governmental forces and the pirates within the country is so complicated. As we all know, the communities of people who live around the Delta are supporting somehow the pirates, they probably live from the piracy. To be specific, they have been involved in several cases of kidnaps and this is a reality. The local people are supporting this because they gain money from that”.

You may see the whole talk herebelow: