Celebrating the Day of the Seafarer 2019: I Am Onboard for gender equality

On the occasion of the Day of the Seafarer celebrated each year on 25th June, the IMO is calling on everyone in the maritime world and beyond to get onboard with this year's theme of gender equality and declare their support. The day celebrates and recognizes every year the unique contribution made by seafarers from all over the world to international seaborne trade, the world economy and civil society.

As in previous years, the Day of the Seafarer 2019 will be centred on social media. With its hashtag #IAmOnBoard, the campaign links with the IMO World Maritime Day theme, Empowering Women in the Maritime Community.

The theme supports the achievement of the Sustainable Development goals, specifically SDG 5 with the aim to ‘ensure women’s full and effective participation and equal opportunities for leadership at all levels of decision-making in political, economic and public life.’

To this end, “#I Am On Board" hashtag can be used by anyone engaging in the campaign, male or female, to show their solidarity for gender equality in seafaring.

To everyone in shipping – you are missing out on a huge talent pool if you don't recognise and empower women in the workplace. Join our Day of the Seafarer campaign and get on board with gender equality at sea,

A more specific and targeted element of the overall campaign this year is 'Make one change', with IMO urging seafarers, shipping companies and individuals of all genders to share their thoughts on its virtual wall on what they would do if they were able to make just one change to improve diversity in seafaring.

Women in maritime: where we stand

IMO has recently shed its efforts to raise awareness on the issue, with the decision to set ‘Empowerment of women in the maritime sector’ as the theme of World Maritime day for this year, while it has supported several special events on this fragile issue.

Meanwhile, the board of the International Association of Ports and Harbors (IAPH) announced in April the allocation of a budget fund of USD 10,000 to develop a Women in Ports Mentoring Program designed to attract, empower and retain female talent in the industry.

In the same context, several maritime leaders seem to boost action to achieve a gender balance, with special campaigns and initiatives:

All these while the latest salary survey data by HR Consulting in the UK revealed that the maritime industry is struggling to achieve equality, with men earning almost 44% more than women, which proves that more needs to be done.

So, this year let’s join our efforts to welcome and retain more diversity in this unique industry! 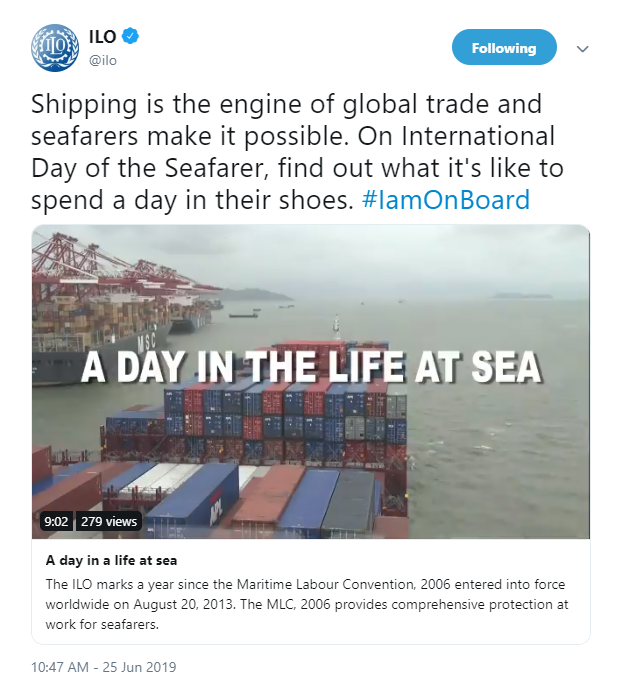 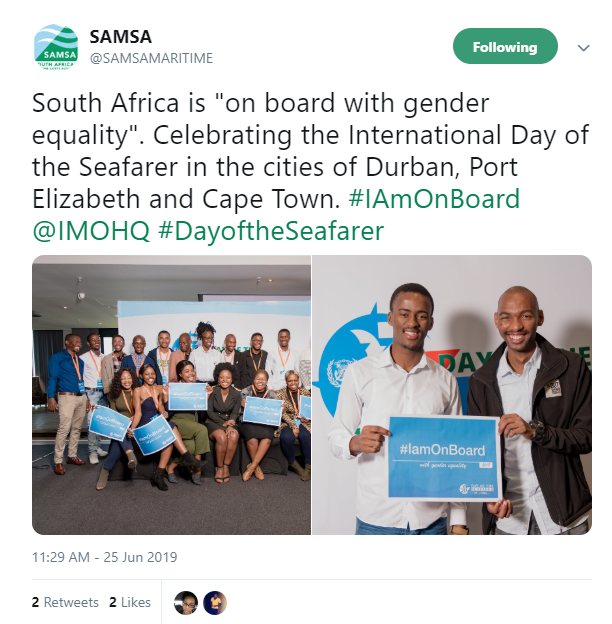 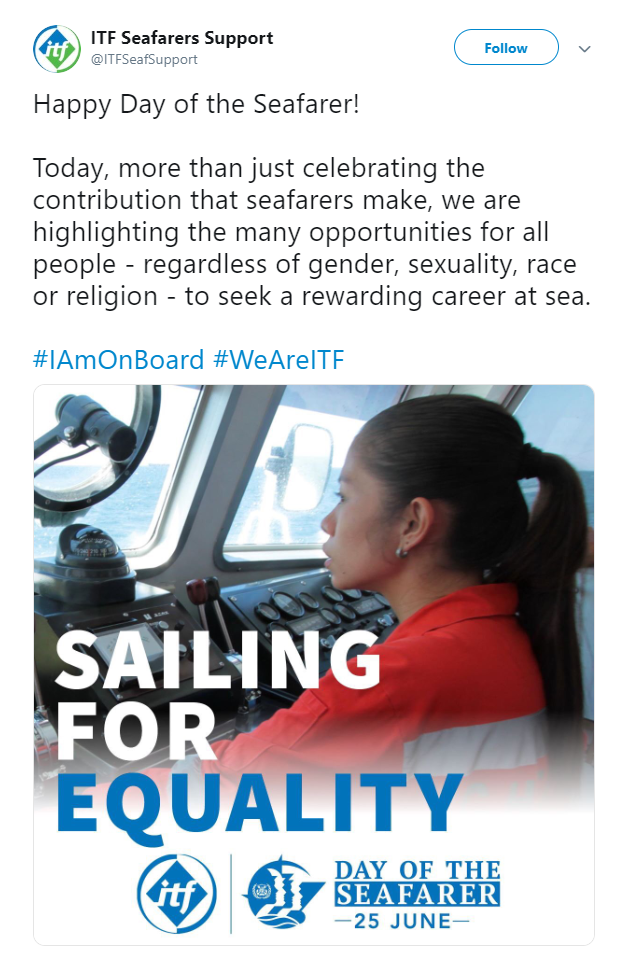 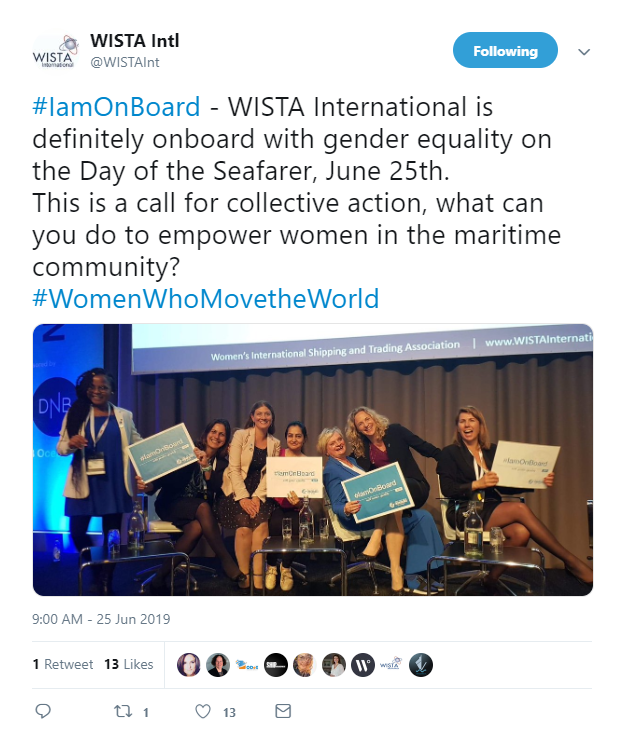 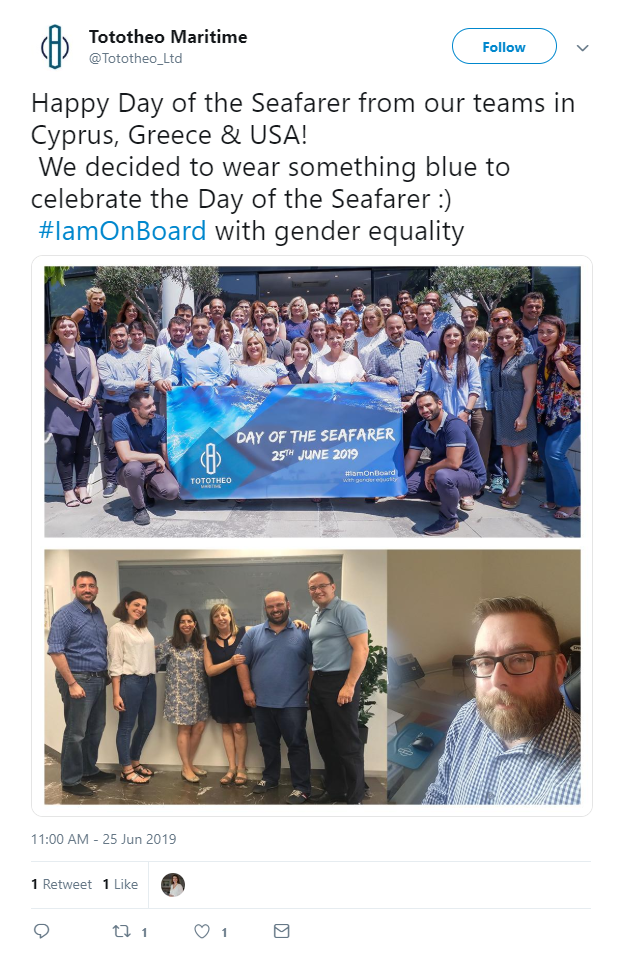 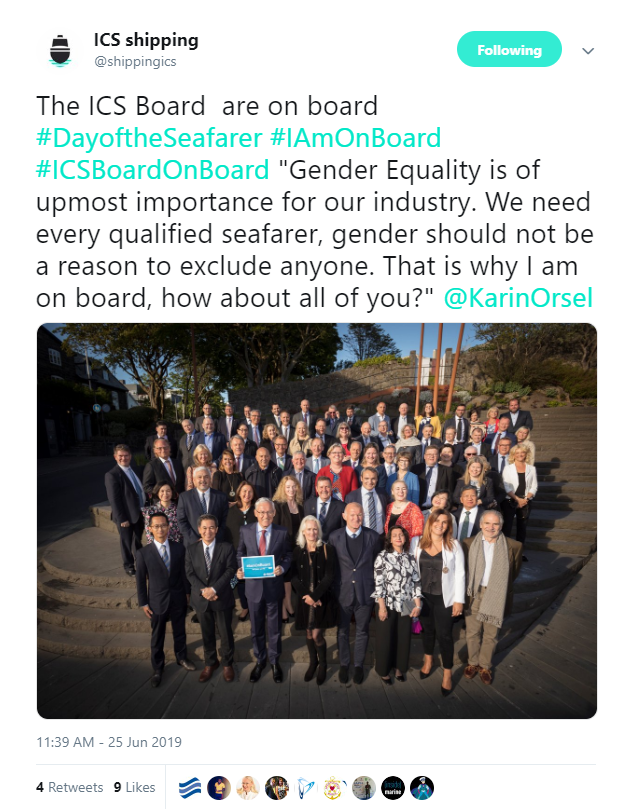 #3 inspirational quotes for the Day of the Seafarer 2019

The only thing that should limit you in life is your own imagination.

If global trade is the engine of economic growth, shipping is the cylinder oil that keeps the engine running. However, the people who make this – our – industry work are almost invisible, as they labour unseen beyond the horizon and out of mind. For this reason, the Day of the Seafarer should be applauded for encouraging us to pause and reflect on the importance of deck officers, engineers and everyone else on whom the industry relies to ensure cargoes are delivered safely and on time,

Diversity is necessary for industry growth. Diversity is important not just for diversity’s sake, but because it brings in the skills that move an industry forward. Shipping is no different. However, this is a time when companies are looking into alternative ways of working, influenced by digitalisation and the age of innovation we are currently in. These present an opportunity to attract more women in the shipping industry. To recruit the talent needed, shipping needs to rebrand itself in order to be seen as: diverse, young, adaptive, digital,”

In case you missed it

On the occasion of the Day of the Seafarer 2019, Captain Maria Kristina B. Javellana from the V.Group described  some of the biggest challenges in her role as a Captain, including discrimination and harassment:

Even if you are already at the top of your rank, there are still some people who will prejudge you because you are a woman, rather than your capability to deliver the job that is required. I don’t consider things which I do not know as a form of weakness on my part but rather I always look at it as challenges, as long as I am striving and doing my best effort to do the right thing and to overcome it. When I am being challenged, I always use it as a positive experience as I believe you must always attract positive vibes to have a positive result.

British charity Human Rights at Sea first introduced the concept of ‘Gender at Sea’ in 2015.