A series of causes contributed to the following vessel grounding; the safety investigation revealed that the course recommended by the pilot was different from the one prepared in the passage planning. Moreover, during navigation in El Dekheila Channel (Egypt), the vessel navigated close to shallow areas, and subsequently ran aground and remained stranded.

On November 2016, during daylight time, a Bulk carrier ran aground and remained stranded in the entrance of El Dekheila Channel, Egypt. The vessel had completed her sea passage fully loaded with a draught of 17.5 m. In respect of draught, the ship was planned to enter the port from the buoyed channel. A detailed passage plan was prepared on ECDIS including the planned track, safety contour and safety depth as required and no go areas in accordance with ship’s size and draught.  Two pilots had boarded the vessel and proceeded to the bridge where the master, third mate and a helmsman were already in the wheelhouse.

The vessel was proceeding towards the entrance of El Dekheila Channel, following course alternations recommended by the pilot. The pilot’s orders were given directly to the helmsman. Although the Master was on bridge supported by an officer, there were no checks conducted to verify ship’s position in relation with the planned track.

Additionally, as revealed later, the off-course alarm on ECDIS was de activated in order to reduce the sound level within the bridge during pilotage. The No Go areas were not taken into consideration by the pilot and no other of the bridge team interfered or made a comment / recommendation on the progress of the ship over ground and the planned track.

Taking into consideration the findings the following root causes seem to led to the accident. 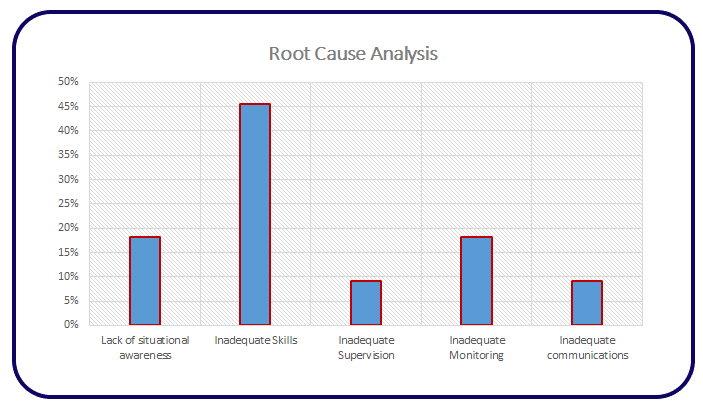