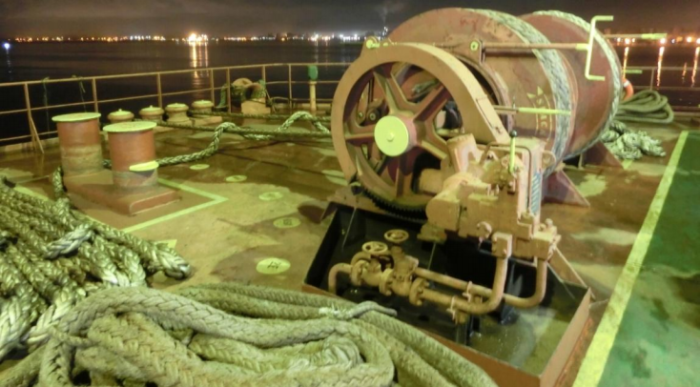 Case study: Fatal Accident on Board

The following case study, based on an investigation report issued by Transport Malta, refers to a fatal injury occurred as the crew member got trapped between the mooring rope on the winch drum and the deck on the poop deck. The safety investigation revealed that in order to perform the task of stowing the mooring ropes on the winch drum, the crew members had to engage physically with the ropes while the winch was rotating.

In November 2017, a bulk carrier departed Porto Marghera Italy, loaded with iron, bound for Alexandria, Egypt. The two pilots, who had assisted the ship during departure, disembarked. The crew members on deck started making the vessel ready for the sea passage, as per normal routine, thus retrieving and securing the pilot ladder, securing the anchors, and the mooring lines on the winch drums. The weather was calm with only slight seas.

On the aft deck, two experienced ABs worked to secure all of the mooring rope lines on the two winches, together with the chief and second mates. When the first three ropes had been duly secured, the officers left the aft deck to attend to other business on deck. A deck cadet went aft to assist the two ABs with the securing of the last mooring line. One of the ABs was operating the winch from the control lever, while the other AB guided the rope onto the winch drum so that it would stow neatly. The cadet assisted the AB with the stowing from a position behind the AB.

During the final stage of the reeling in, the AB who did the stowing, knelt down very close to the winch drum, in order to be able to make the last part of the mooring rope fit on the winch and prevent chafing from the deck. Chafing was a potential problem because of the very little clearance between the fully loaded winch drum and the deck surface underneath.

The AB operating the winch had no awareness of the activities behind the winch drum as this itself prevented him from visually observing the AB who did the stowing. Then, the loud noises on the aft deck, coming from the engine-room, the steering gear below and the engine-room ventilation fan, prevented verbal communication on the aft deck. Therefore, the cadet, who was situated further aft and within visibility of the winch operator, acted as a communication link between the two ABs.

When the mooring line was almost completely stowed on the winch, with only the rope eye left on deck, the AB working with the stowing told the cadet to go to the winch operator and to ask him to stop reeling in, in order to be able to secure the rope eye with a small piece of thin rope on the winch foundation.

The cadet got up from his position and walked for approximately three metres to the winch operator’s position and told the winch operator to stop the winch, which he immediately did. It was only about two to three seconds later, when the cadet turned around towards the aft part of the winch drum again and noticed that the AB was no longer behind the winch. He also noticed that almost all of his body was now underneath the winch drum, despite the limited clearance between the stowed rope lines and the deck, with only his legs visible. The cadet shouted to the AB operating the winch, who immediately realized that a serious accident had just occurred. The AB got crushed between the deck and the mooring rope and consequently he was severely injured. He was later pronounced dead by a medical doctor on board a Coast Guard vessel, which had come to assist and evacuate the casualty.

Whenever the Bulk Carrier left port, it was normal procedure to tidy up the deck spaces in preparation for the sea passage. The ship’s Deck and Cargo Manual offered general advice on how to carry mooring operations in a safe manner; for instance, it stated that the winch operator had to be experienced, and that any trainees involved should be carefully supervised by experienced seamen. The procedures did not specify in great detail how tidying up of the deck (following departure) should be done. However, this was considered a standard and rather simple routine that the experienced ABs were fully capable of carrying out by themselves.

A generic risk assessment form, addressing mooring operations, should be completed prior operation. The same form completed prior to the accident. However, while this was to some extent concerned with the correct operation of the winch and communication between the parties involved with mooring operations, there were no identified risks in relation to the actual securing of the mooring lines on the winches after mooring operations had been completed. Specifically, the risk of being caught by the winch while reeling up the mooring lines was not addressed by the formal risk assessment, nor was the risk associated with reeling an excessive mass of mooring rope onto the winch drums.

The investigation revealed that the crew members had to engage physically with the ropes while the winch was rotating, to stow it properly and make room for all of the rope. The close proximity to the rotating winch and physical interaction made it possible to get caught. Furthermore, communication among the crew members easily became ineffective due to the setup of the mooring arrangement and loud noises on the aft mooring deck. The following may have also contributed to the accident: