In our special column for June, we are glad to host an interview with John Green, former Director of Development at global seafarers’ charity Stella Maris who discusses his role in communicating the welfare needs of seafarers to the charity’s supporters and building a network of support for crew around the world.

In John’s 17-year career at Stella Maris he saw the value in collaboration to extend the impact of the charity’s welfare work and also the incremental value of daily tasks. In recent years, he has been involved in the implementation of a robust system of monitoring serious crew welfare incidents around the world that has led to more joined up care for crew in traumatic incidents.

SAFETY4SEA: How did it come about that you joined the shipping industry and what is your field of expertise?

John Green: My first full time steady job was with a publisher in their Rights department selling Rights to other publishers around the world. It was the personal dimension of this I really enjoyed. I then responded to an advertisement for an assistant fundraiser for Stella Maris (then known as the  Apostleship of the Sea) and thought if I could sell books I could convey the need to support seafarers’ welfare and I was offered the job, 17 years ago!

S4S: What about your job/ role at Stella Maris most excited you and why?

JG: The fact that Stella Maris provides a very simple service, visiting ships to break down the isolation of seafarers and provide them with practical help; transport ashore, communications with family, and on an impressive scale, Stella Maris is the largest ship visiting organisation in the world. Because of this we are able to be there for crew in tragic situations; abandonment, non-payment of wages, deaths on-board. Ensuring joined up care in such circumstances between ourselves, ship managers, P&I clubs and colleagues around the world makes such a difference to these seafarers and their families.

S4S: When you think of the word successful who is the first person who comes to mind and why?

JG: Harvey Duthie, until recently senior vice president at CCS Fundraising. I first met Harvey whilst his team was leading a major fundraising campaign for some London churches and was impressed by his drive and his methodical analysis of process and results. However, what stood out was his generosity in joining a review panel, on a voluntary basis, to do a root and branch review of our charity’s fundraising and communications. His expertise and outside view were invaluable.

S4S: Who is/was the most influential person/mentor to you & why ?

JG: The first director I worked under at Stella Maris. He evidently lived the vision of the charity, knowing the vital difference it made to seafarers and his determination to collaborate with other organisations to increase the scope of welfare provision. Everything else, whilst necessary to run the organisation, came second.

S4S: What is the best and what was the worst piece of advice you've ever been given and why?

J.G.: The best piece of advice was from my mother and the piano practice she encouraged me to do, ‘a little every day’. Transferring this to my professional life means that either alone or with my team huge tasks can be tackled step-by-step and looking back over years, we’ve made a tremendous difference to seafarer welfare by just reviewing projects and data one day at a time.

S4S: What is the most worthwhile career investment (in energy, time, money) you’ve ever made?

JG: My first director encouraged me to study a Masters in Charity Management. Doing this meant juggling work, a young family and a significant amount of study. However, the benefit was getting a good understanding the academic underpinnings of running a medium sized charity, but also in spending two years with peers on the course exchanging lived experience of working in a charity was irreplaceable.

J.G.: Collaborating is not easy but it is worthwhile. The great strength of Stella Maris is its global network of port chaplains and ship visitors who at little notice will be ready to visit a distressed crew to provide practical and pastoral support. Maintaining and building that network has been a key achievement but is built on getting out and meeting people and then sustaining those relationships. Sometimes there are misunderstandings, certainly across cultures, but maintaining the network multiplies considerably what one can achieve.

S4S: In the last five years, what new belief, behaviour, or habit has most improved your business life?

JG: Documenting and systematically reviewing critical maritime welfare incidents. Welfare cases often involve many players; crew, port authorities, ship managers, Stella Maris chaplains in various ports. Documenting the issues and following the case as the crew and vessel move around the globe has ensured a joined up and ongoing care for crew following a traumatic and stressful incident. It has also enabled me to analyse trends and causes to better work with companies to support their crew. 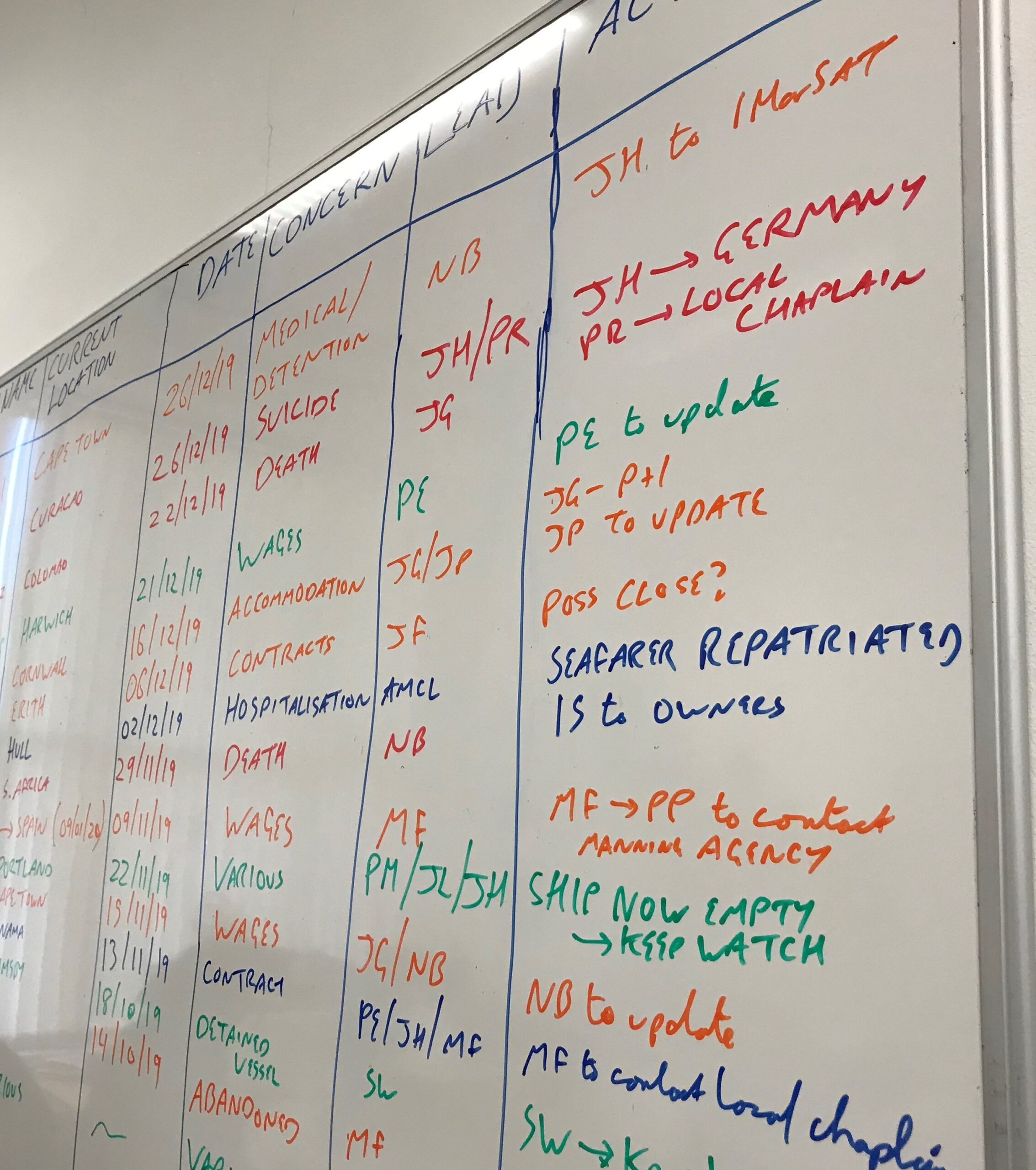 S4S: What would you like to change in the current maritime landscape and your area of expertise specifically and why?

JG: Better enforcement of the ILO’s work in fishing convention. Stella Maris still comes across too many cases across the world of poor conditions onboard ships involved in fishing. Stella Maris annual Life at Sea report  continues to detail unspeakable conditions for crew on fishing vessels including non-payment of wages, unseaworthy vessels and violence. Providing resources for port state controls to enforce this convention will go a long way to eradicating these abuses.

S4S: What is your personal motto?

JG: Cucullus non facit monachum (The cowl does not make the monk), i.e. it doesn’t matter too much what the job title is, it’s the behaviour one has to others around you at work or elsewhere that matters.

John Green was working for global seafarers’ charity, Stella Maris for 17 years (up to March 2020) where  he headed up their fundraising and communications team that raises over £1.4million each year so that the charity can deploy port chaplains to provide welfare assistance to seafarers.  In 2008 he was awarded a Masters in Voluntary Administration from London South Bank University, his thesis was on the ‘Pastoral Care needs of Cruise Ship Crew’.  He is married with six children and plays the organ and trombone.