Above image is used for illustration purposes only / Credit: DNV GL

Are alternative fuels ready for commercial use?

Jon Anders Ryste, Senior Consultant, Environment Advisory, DNV GL presents a recent study, whose ambition is to assess the commercial and operational viability of alternative marine fuels. The study analyzed six fuels, having LNG as its base for comparison.

With IMO 2020 only months away, the shipping industry analyzes different fuels, which can help companies comply, and reach closer to decarbonization.

The study examines six such fuels, having LNG as a comparison. These fuels are:

In terms of parameters of the study, it is divided into four categories:

This category refers to how easy it is to apply a fuel. It consists of:

Different alternative fuels and pathways will have different possibilities for maturing and scaling up. For scalability:

As Mr. Ryste explains, the energy density of a fuel is determining how applicable the fuel is for a certain ship.

LNG has about 40% less volumetric density than diesel, being roughly in the same region as LPG. Considering the storage system, LNG has even 40% lower energy density.

Moreover, liquid hydrogen, ammonia and methanol are even lower in density, at around 40-50% of LNG. However, the additional storage system need for methanol is less, bringing it quite close to LNG, as far as density is concerned.

Additionally, biodiesel is the only fuel that is quite close to diesel. Ammonia is normally stored in pressurized Type C tanks, giving it similar impact to actual ship space utilization as LNG, when it counts for the storage systems.

As for hydrogen, the study noted that, when considering the storage systems, this impacts the feasibility, since the density is significantly lower than other alternative fuels, bringing it closer to batteries.

Speaking of batteries, it has by far the lowest densities

Regarding energy cost, the team that conducted the study compared the costs for the different energy carriers. As the graph shows, a wider span in data means greater uncertainty. 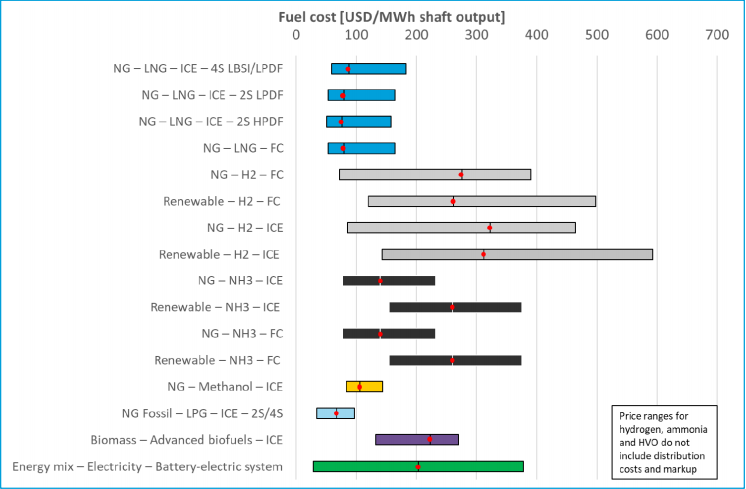 For some of these fuels, only the commodity prices are given, and not the price of the delivered fuel. This is the case for hydrogen, ammonia and HVO.

Considering the cost of liquefaction and the distribution, storage and bunkering, the price of the fuel would be higher than presented

As DNV GL says, the market has experienced that from the distribution cost of LNG. From LNG terminals to receiving ships, the cost typically ranges to 420 USD. This means that, for example for ammonia this would translate to 20-70 additional dollars.

According to the graph, it becomes evident that LNG, methanol and LPG are quite competitive in terms of costs, while HVO is significantly more expensive.

Hydrogen and ammonia are also more expensive and the wide cost range suggests that the uncertainty in these is quite high.

For electricity there is a wide span due to large regional and seasonal variations.

Another key parameter is the capital costs, with the fuel storage system. However, the data has not been available for some of these fuels. Nevertheless, the team said that the marker has experience in some of these; for example ammonia will be more expensive. It could range along the lines of LPG, which also has no specific data available at the moment, since they are stored in the same type of tanks.

As far as batteries are concerned, they are extremely expensive, also because they have a life term of only 1/3 of traditional tank system. 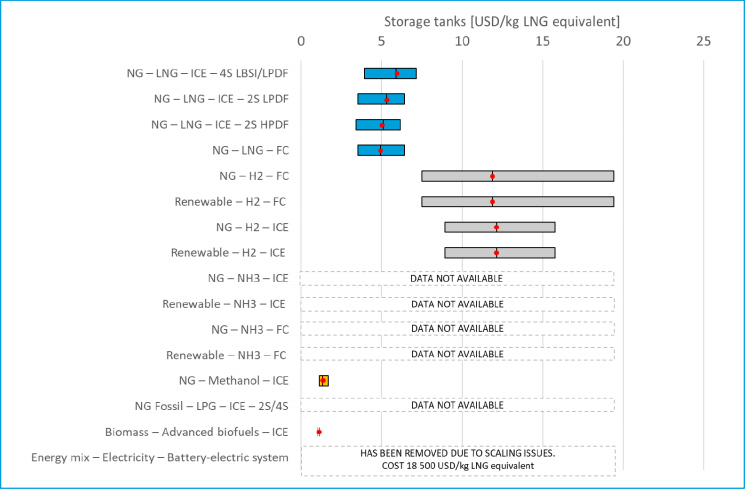 The last parameter is GHG emissions. As Jon Anders Ryste explained, it is very difficult to assess them, as there is varying information. For example, for hydrogen and ammonia there is no current available data.

According to the study, methanol performs quite well on applicability, as it can use available existing converter technology in low tank costs, giving low capital costs. Nonetheless, it has a major downside, and this is the environmental performance, as well as the low number of vessels in the market. This means that there is little operational experience.

The same thing applies for LNG as well, while biofuels, and especially HVO as an advanced biofuel, it can be used as a drop-in in the technology used today. The availability however is quite low.

What is more, for renewable fuels there is ammonia, which along with the energy transition to renewables could become a very interesting fuel. Of course there are still some main barriers, one being the energy costs and the availability as a marine fuel. In addition, yhere are also some issues needed to be worked on in terms of flammability and toxicity.

Considering hydrogen, the picture is even more red at the time, with several barriers needing to be overcome for the fuel to be commercialized.

Finally, for electricity to be used widely right now it is very difficult, in light of the density and the use of deep sea shipping as such. 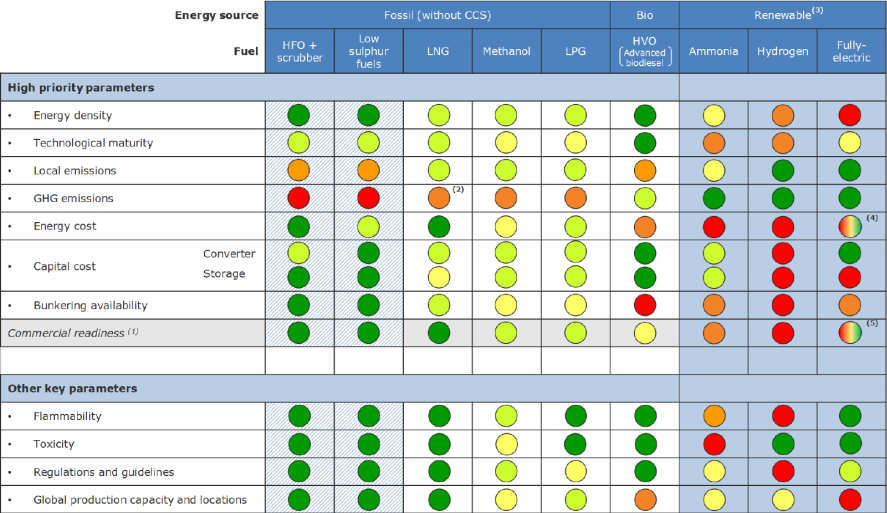