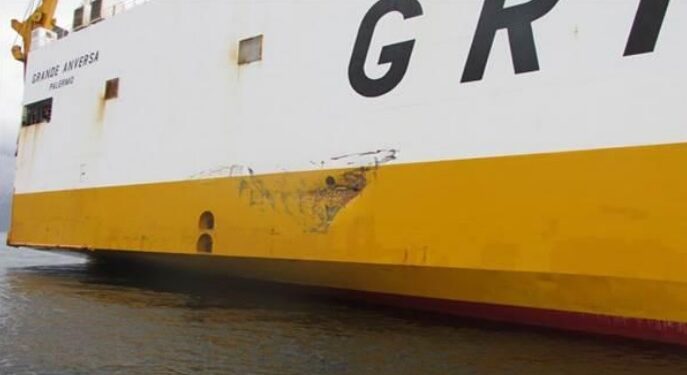 Damage to the side shell plating on 'Grande Anversa' / Credit: MSIU

Transport Malta’s Marine Safety Investigation Unit( MSIU) issued an investigation report on the collision of the cargo vessel ‘Sider Capri’ and the ro-ro vessel ‘Grande Anversa’, in the Çanakkale Strait’s Traffic Separation Scheme, last November, providing a description of what happened and safety recommendations to avoid similar vases in the future.

On 27 November 2016, the Maltese registered cargo vessel ‘Sider Capri’ and the Italian flagged ro-ro vessel ‘Grande Anversa’ collided in the Çanakkale Strait’s Traffic Separation Scheme. At the time, Sider Capri was on a passage from Constanta, Romania to Larnaca, Cyprus. The chief mate was alone on the bridge of Sider Capri and was also at the helm.

Grande Anversa was on an Easterly course in the in-bound traffic lane, bound for Autoport, Turkey. The master had the con, the second mate was officer of the watch and an able seaman was at the helm. Both Sider Capri and Grande Anversa sustained structural damages above the waterline but no injuries and no pollution were reported.

The safety investigation found that the cause of the accident was a close quarter situation which developed to a point that a collision became inevitable.

In view of the conclusions reached and taking into consideration the safety actions taken during the course of the safety investigation, MSIU provided the following advice.

Grimaldi Group Spa is recommended to:

The Turkish Straits Vessel Traffic Service is recommended to:

Further details may be found in the following report: