Responding to a recent report by T&E critisizing the cruise industry's emissions, the Cruise Lines International Association (CLIA) said the results have been published without any academic scrutiny. It also cited significant investments in scrubbers and LNG over the last years, noting that the industry is fully committed to a zero emission future.

...We welcome the involvement of civil society in this discussion but are disappointed that Transport & Environment have published this internal analysis, conducted by their own staff, without discussion or input from the cruise industry or the destinations we visit. We are also concerned that its results have been published without any academic scrutiny or peer review. The ranking is also solely based on assumptions and not measurements and takes no account of whether any abatement technology is employed on the ships. The methodology used to calculate the results has also not been agreed as a scientifically robust process,

This comes as a response to a recent analysis by the sustainable transport group Transport & Environment, revealing that Carnival Corporation emitted about 10 times more SOx around European coasts than did all 260 million European cars in 2017.

NOx emissions from cruise ships in Europe also heavily affect some cities, equivalent to about 15% of the NOx emitted by Europe’s passenger car fleet in a year, the report found.

The Association further underlined the cruise industry is also an early adopter of LNG propulsion.

More than one-third of all new ships being built, 25 ships total, will use LNG as their primary propulsion fuel and currently, two ships are able to use LNG while in port. Over 70% of the cruise fleet – 152 ships – are dual fuel ships.

These percentages for EGCS and LNG are unmatched in any other shipping sector and not fully appreciated in T&E’s analysis,

Moreover, the CLIA statement provided an answer for each recommendation provided by the report on cruise industry's emissions:

Recommendation 1: In order to create a level playing field between SSE and fossil fuels used onboard, the EU should exempt by default SSE from electricity taxation for a transitional period of time, and/or tax at an equivalent rate fossil fuels used on board.

Of course we agree that there should be a level playing field between SSE and fossil fuels used onboard. Regarding the introduction of a transitional exemption from electricity tax by the EU, this is very much actively supported by the Cruise sector. Marine fuels are not just an EU issue but a global issue and the IMO is actively engaged in reducing GHG emissions from shipping and to present the necessary measures, in line with EU expectations.

Recommendation 2: The EU should mandate zero emission berth standard in European ports, hence requiring ships to use SSE or implement alternative measures to achieve equivalent results. This would help ports that have invested in SSE avoid stranded assets.

Regarding a standard zero emission berth standard, it would depend on specific local circumstances whether or not SSE is a good investment. We must keep in mind that in order to effectively cut emissions, shore-side power must come from clean, efficient sources and for instance be an effective option versus running the ship on LNG or with EGCS. Moreover, at the moment there is not one connecting standard system used everywhere which makes it even more difficult for our members to invest in this technology. To date 55 cruise ships, over 27% of total capacity, are fitted with shore-side electricity systems and thus are able to use shore power where available. An additional 11 ships are planned to be retrofitted with these systems and 17 new ships will be fitted with them as well. However, currently only 13 ports that CLIA Cruise Lines visit have at least some capacity for use of shore side electricity: Brooklyn, Halifax, Hamburg Altona, Montreal, San Diego, San Francisco Berth 35, Los Angeles, Long Beach, San Pedro Berths 92 & 93, Seattle, Shanghai, Vancouver Canada Place, and Juneau. There needs to be massive investment, especially in Europe, if this recommendation is to be achieved.

Recommendation 3: Extend SECA standards to the rest of the EU seas and further tighten the SECA standard, notably, in favour of 10ppm sulphur standard (0.001%) currently applicable to road transport.

Extending the SECA standards to the rest of EU seas will take time and in accordance with the current regulatory framework, we would appreciate confirmation that both open and closed loop EGCS are allowed to be used, that LNG and other alternative fuels are supported and developed and that they are physically available to be used. For a front runner, like the cruise industry, certainty of early investments and predictability of future expectations is of major importance. Of course, any new SECA would have to be proposed following the worldwide agreed IMO procedures for such areas.

Recommendation 4: Given that NOX from existing and new ships is of great concern and that upcoming Baltic and North Sea and English Channel nitrogen emissions control areas (NECAs) will only address emissions from new ships built after 2021 alone, there is a need to tackle NOX from existing ships in all European waters (outside ports). For this reason, we recommend for a stand-alone EU measure, including possibly a financial mechanism similar to the Norwegian NOX Fund. Ships can use SCR systems and diesel particulate filters (DPF) to reduce their NOX and PM.

It should be noted that the development of a financial mechanism similar to the Norwegian NOx fund has in the past not been opposed by the industry. Just stating that “ships can use SCR systems and diesel particulate filters to reduce their NOx and PM” is a very simplistic approach as it does not take into account their availability, possibility of being retrofitted and the financial investment needed. Also, the massive investments made in emission reducing technologies by CLIA members has not been supported by the Norwegian NOx fund as in fact, no CLIA member line has received funding to date.

Finally, developing a zero emission control area is an admirable aspiration but it has to be clearly defined and thought through. CLIA and is members would welcome working together to explore this scenario further and build a cleaner Europe for all our citizens.

Find out the report herebelow: 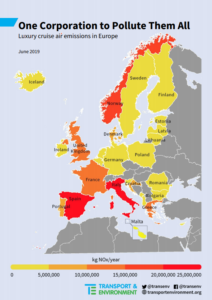