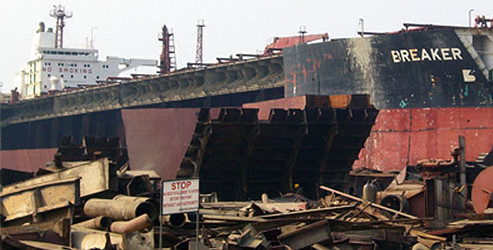 The Clean Shipping Coalition has criticized Maersk for its plans to consider to flag out end-of-life vessels from the Danish or other European registries in order to circumvent the European Ship Recycling Regulation.

Specifically, the Group’s head of CSR stated in ShippingWatch that 'iif the EU’s new scrapping requirements keep Maersk from using certain shipyards in Alang in India, the shipping group will consider out-flagging vessels before they are scrapped''

"Maersk is a European company and should abide by European laws. Suggesting that it might use a flag of convenience to escape EU ship breaking rules designed to protect the environment and worker safety is scandalous, and will seriously undermine its credibility as a​ ​responsible​ ​ship owner and operator."

Until recently, Maersk followed a progressive policy on ship recycling, including a ‘cradle to grave’ approach which committed to ‘total vessel recycling’. Maersk’s decision to resort to the low-cost method of beaching and to flagging out its ships beforehand undermines not only the company’s position as a responsible industry leader, but also European efforts to improve global conditions, the Clean Shipping Coalition said.

Recent technical guidelines for ship recycling facilities issued by the European Commission make it clear that a beach is not an appropriate place for a high-risk heavy industry involving hazardous waste management. While only vessels sailing under an EU flag will be legally obliged to use an EU approved facility, the NGOs have called for all shipping companies around the world with a responsible policy to use EU-approved facilities to show that they are recycling vessels responsibly.

“While Maersk supports innovation in reducing air polluting emissions, this move shows a cavalier attitude towards the environmental impacts of dismantling ships in the intertidal zone. Maersk needs to reverse course on practices that it previously denounced and that would never be allowed in Europe.”