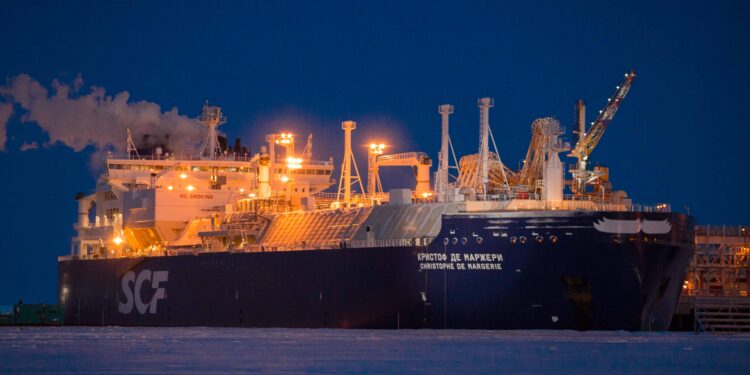 The icebreaking LNG carrier ‘Christophe de Margerie’ completed her first loading of LNG cargo at the Port of Sabetta, on the Yamal Peninsular, on 8 December. The LNG cargo was produced at the Yamal LNG plant.

The ship, owned by Russian shipping company Sovcomflot, is the first in a series of 15 icebreaking LNG carriers ordered for the Yamal LNG project, to transport LNG year-round in the challenging ice conditions of the Kara Sea and Gulf of Ob. Her appearance signaled the market debut for Yamalmax ships, a new class of vessel. The ship has also been assigned an ice class Arc7, the highest ice class amongst existing merchant vessels.

“This is a remarkable day for us all…This is not just an important event in our country’s energy sector, or gas production and liquefaction. This is a more ambitious project. What I mean is that we are faced with the enormous task of developing the Arctic and the Northern Sea Route,” said Russian President Vladimir Putin.

The vessel is capable of sailing independently through ice of up to 2.1 metres thick, so she can sail unassisted along the Northern Sea Route westward from Yamal all year-round, and eastward for six months of the year (from July to December) to the ports of Asian-Pacific Region (APAC) countries. Previously, the summer navigation window in the eastern area of the Northern Sea Route was limited to only four months with icebreaker support.

“Today’s event marks a milestone moment in the history of the development of the Russian Arctic. Never before have merchant vessels of such a heavy tonnage been able to operate in such extreme navigational and ice conditions, as the ones at Yamal, independently and year-round,” noted Sergey Frank, President & CEO of Sovcomflot.

Yamal LNG commenced LNG production at the first LNG train on 4 December. Operated by a joint-venture of Novatek (50.1%), French Total (20%), CNPC (20%) and Silk Road Fund (9.9%), the project consists of construction of an LNG plant with an output capacity of around 16.5 million tons per year.

“Novatek officially enters the global gas markets by shipping the first tanker loaded with LNG from our flagship Yamal LNG project. This event begins the process of developing and liquefying our massive natural gas resources on the Yamal and Gydan peninsulas into more than 70 million tons of LNG. This potential gives our country an opportunity to become one of the biggest global LNG exporters,” adds Novatek’s Chairman of the Management Board, Leonid Mikhelson.