DNV GL and Menon Economics revealed the report "The Leading Maritime Nations of the World" in which they announced that China is the top shipping nation. The study presents the 30 leading maritime nations in four maritime pillars: shipping, finance and law, maritime technology and ports & logistics.

The report notes that China is the world’s leading maritime nation, because of its top four ranking in all of the maritime pillars. China’s position is strong on the ports and logistics pillar, with the world’s largest container and bulk ports.

USA is second, with high scores on all four dimensions, followed by Japan. Germany, Norway and South Korea, are in 4th. Germany is its consistent, with a top 5 spot in three categories, while Norway is strong in Maritime Finance & Law and maritime technology. South Korea leads in Maritime Technology and is among the top 10 in Shipping and Ports & logistics. 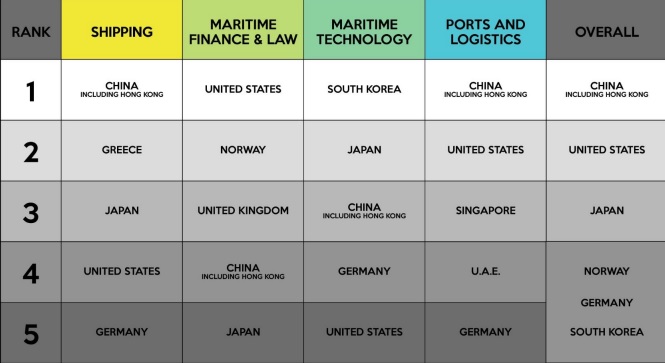 These results show that the countries rankings mirror their national economies, however smaller countries such as Norway, South Korea, and Greece  can have an  influence to the maritime world.

Key findings of the report