China Gets Tough on Superships

by The Editorial Team
in Shipping
FacebookTwitterEmailLinkedin

China’s central government put a tight rein on the ability of a new breed of supersize iron-ore freighters to stop at Chinese ports, potentially complicating efforts by Brazilian mining company Vale SA to gain access to the lucrative market.

China’s Transport Ministry called for more stringent review for accepting such ships into ports. It also said port operators no longer would enjoy discretion in allowing dry-bulk and oil ships exceeding current weight limits to berth at the ports.

“The safety outlook regarding oversized ships is not good, and the risks from their stopping at ports is on the higher side,” the ministry said on its website Tuesday. China had given port operators discretion to permit oversize ships to berth three times a year.

The ministry’s statement stopped short of an outright ban on the ships, an apparent compromise in the face of competing agendas from Chinese companies that see profit and peril in the ships. 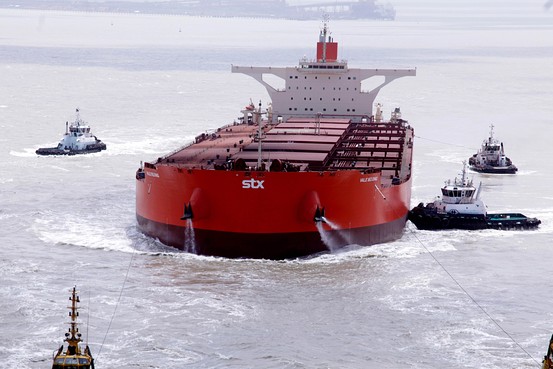 The move appeared aimed at Vale, one of the world’s largest producers of iron ore, a critical ingredient for making steel. Vale is counting on a new class of ships, known as very large ore carriers, with enough cargo capacity to offset the long distance its ships travel across the Pacific Ocean. Without them, the Brazilian miner has a disadvantage against Anglo-Australian rivals BHP Billiton and Rio Tinto, which ship iron ore from Australia.

The bigger ships indicate the importance of China, which is the world’s largest producer and consumer of steel, to resource companies. And the ministry’s compromise move indicated their influence.

China’s steel industry had opposed allowing the ships, saying a large pile of iron ore at its doorstep would undermine the country’s attempts to set iron-ore prices. And the China Shipowners’ Association, which could face increasing competition from very large ore carriers, has called the ships “safety and pollution risks.” The association in December cited how the Vale Beijing, a VLOC, had to be towed for repairs after cracks appeared in its ballast tanks. Vale says the ships, also known as Valemaxes, are viable.

But as Chinese steelmakers have been less active in attempting to secure a unified iron-ore price, they have been less vocal in opposing the supersize ships. And the ministry’s decision not to ban VLOCs reflected the competing needs of Chinese shipowners, who view the ships as a threat, and shipbuilders, who want lucrative construction contracts.

“The shipowners don’t want VLOCs, but the shipyards do,” said Jay Hsiao, a Beijing-based executive with global ship broker Braemar Seascope. “Within China, there is a dilemma as well.”

China Rongsheng Heavy Industries Group Holdings Ltd. is building 12 of the superships for Vale and delivered its first in November. China Rongsheng competes with such shipyards as South Korea’s STX Pan Ocean Co., which also is building VLOCs for Vale.

China’s largest berth currently appears to be Dalian, with a formal limit of 300,000 deadweight tons, Mr. Hsiao said, based on a review of the Netpas global maritime database.

A handful of Chinese port operators-including the ports of Qingdao and Dongjiakou in Shandong province and Zhanjiang in southern Guangdong province-have been renovating or building new berths to accommodate VLOCs.