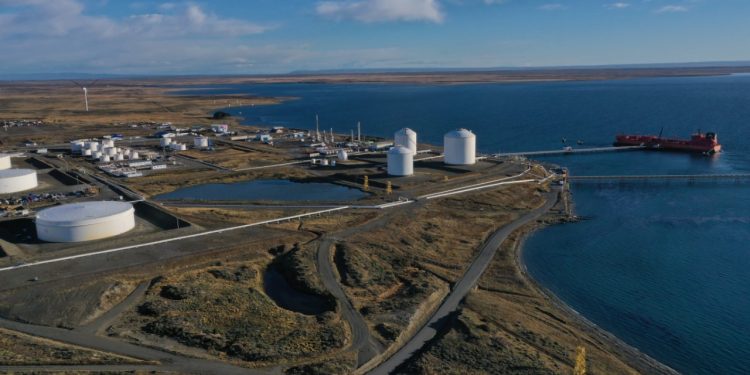 Credits: Ministry of Energy in Chile

Chilean Ministries of Energy, Transport and Telecommunications, and Foreign Affairs, together with the Mærsk Mc-Kinney Møller Center for Zero Carbon Shipping launched a joint project in order to establish green shipping corridors in Chile.

The joint project is called Chilean Green Corridors Network and was announced during the Our Ocean Conference hosted by the governments of the Republic of Palau and the United States in Palau with U.S. Special Presidential Envoy for Climate John Kerry.

The Mærsk McKinney Møller Center for Zero Carbon Shipping was established in 2020 and works to accelerate the transition towards a net-zero future for the maritime industry by developing new net-zero fuel types and technologies in close collaboration with partners across the shipping value chain.

As described, first project step will comprise the mapping and assessment of the most promising green corridors in the region, based on emission intensity, fuel availability, distance to ports, vessel segments, routes and cargo types, among other relevant aspects. This work will be completed in 2022, and it will pave the way for the deployment of selected green corridors in the coming years.

The Mærsk Mc-Kinney Møller Center for Zero Carbon Shipping will lead the pre-feasibility study in close collaboration with representatives from the Chilean Government, engaging relevant stakeholders which operate in the end-to-end value chain associated with the corridors. The aim is to drive the formation of consortia among these stakeholders, who hold the potential of fully realizing green corridors.

The Chilean Green Corridors Network demonstrates effective collaboration between private and public sector, which is critical for the maritime decarbonization and to enable the green transition on a global scale. This is well recognized by the Chilean Government and Ministries, who have put forward an ambitious roadmap for decarbonizing not only Chile, but the entire region.

Green maritime transportation is central to this strategy as Chile is highly dependent on domestic as well as international maritime transport due to the country’s geography. In November 2021, the country was among the first to sign the Clydebank Declaration to support the establishment of green shipping corridors.

Regional first mover initiatives like the Chilean Green Corridor Network pave the way for a decarbonized maritime industry. Establishing green corridors will not only create a relevant pull for the development of zero carbon marine fuels and technologies – it will also provide the foundation for new, sustainable business models both onshore and offshore, accelerate research and take us one step closer to a global carbon neutral economy.

We need large-scale projects like green corridors to take the decarbonization of the maritime industry from theory to actual demonstration of production, supply and use of alternative fuels in the ports. Only this way will we align on standards and obtain the experience and knowledge we need to scale solutions fast enough to meet the end target of net-zero in 2050

The CEO also mentioned that “It is essential to the transition that Governments actively take responsibility and participate in establishing green corridors. The climate does not have the time to wait for global regulation to be in place before we start acting and therefore depend on progressive Governments like the Chilean to demonstrate the needed first mover leadership. Even at project scale this is a systemic change that requires public and private actors to act together.”

The decarbonization of maritime transport via the early implementation of green corridors is poised to become a leading example in international collaboration, private-public efforts, and long-term vision, which is required to reach our carbon neutrality goals, keeping the 1.5º C degree goal within reach

Yesterday, in order to accelerate the decarbonization of the maritime sector, Hapag-Lloyd, a German international shipping and container transportation company, and Mærsk Mc-Kinney Møller Center for Zero Carbon Shipping formalized their collaboration by signing a Partnership Agreement.

In addition, recently, A.P. Moller Capital, a fund management company focusing on investment, also announced its decision to join as a Mission Ambassador the Mærsk McKinney Møller Center for Zero Carbon Shipping. As described, A.P. Moller Capital, as a Mission Ambassador, will support the Center’s efforts developing the relevant infrastructure necessary to decarbonize shipping by 2050.

In February, the Global Centre for Maritime Decarbonization and Mærsk Mc-Kinney Møller Center for Zero Carbon Shipping announced a collaboration by signing a Knowledge Partnership Agreement, committing to a long-term strategic collaboration to accelerate the maritime industry’s decarbonization efforts.