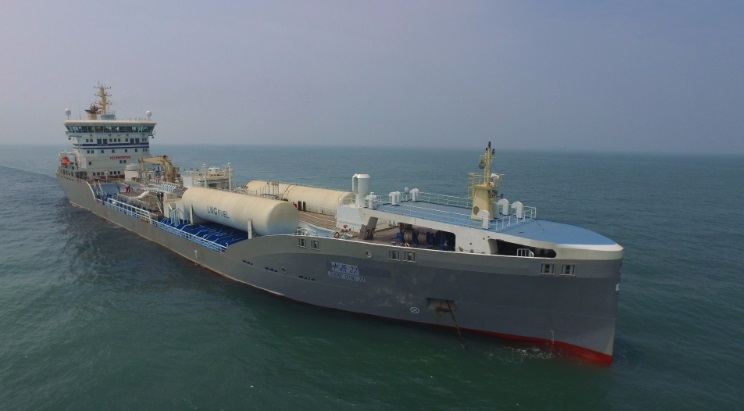 The first dual-fuel two-stroke engine employing the low-pressure X-DF gas admission technology developed by Winterthur Gas & Diesel (WinGD) has passed the final milestone in its evolution from a technical concept to commercial operation as a marine main engine.

The 5-cylinder, 500 mm bore, Wärtsilä RT-flex50DF engine employing X-DF technology is installed as the main engine driving a single propeller in the Ternsund, a low emissions 15,000 DWT chemical tanker. Ternsund was undertaken by AVIC International Ship Development (China) Co., Ltd. (AVIC SHIP), Shanghai, China and completed by AVIC Dingheng Shipbuilding Co. Ltd, Jiangdu, China for Terntank Rederi A/S, based in Skagen, Denmark, and it underwent its sea trials from 22nd to 28th May 2016 and is scheduled to be delivered by the end of June.

Accordingly, the Wärtsilä 5RT-flex50DF engine, rated with a maximum power of 5850 kW at 102 rpm, was run continuously for several days in its gas mode and a series of automated fuel changeovers from diesel mode to gas mode and back were executed. In addition, as customary in sea trials, the engine was run at a range of load points in both gas and diesel mode, including a high load level set to fully exploit the sea margin of the Ternsund with its hull in new condition without fouling. All aspects of the trials have successfully passed, AVIC Dingheng Shipbuilding reports.

With an overall length of 147 metres and a beam of 22 metres, the 15,000 DWT Ternsund is a twin-hull chemical tanker designed to meet Ice Class 1A. It is the first of four vessels ordered by Terntank from AVIC Dingheng Shipbuilding. The Wärtsilä 5RT-flex50DF engine is matched to a design speed of 14.5 knots. It was delivered to the shipyard in October 2015 by WinGD’s engine manufacturer Yuchai Marine Power Co., Ltd. (YCMP) based in Zhuhai, China. Destined to operate predominantly in northern European waters, with its Wärtsilä 5RT-flex50DF engine the Ternsund will meet the strict limits on oxides of sulphur (SOx) in Sulphur Emission Control Areas (SECAs) due to the extremely low sulphur content of natural gas. At the same time, the X-DF technology also enables compliance with IMO Tier III limits on oxides of nitrogen (NOx) in gas operation without additional exhaust gas after-treatment.

This sustainable solution is the result of the “Into The Future – Baltic SO2lution” project which centres on cooperation among Terntank, marine solutions provider Wärtsilä with engine designer Winterthur Gas & Diesel, fuel and bio-products supplier North European Oil Trade (NEOT) and energy and environmental consultant Wega Enviro. The EU co-funded project has been promoting more environmentally-friendly and energy-efficient shipping in the Baltic Sea and the new tanker is set to validate dual-fuel propulsion concepts at sea, based on the combination of the high efficiency and intrinsically low emissions of SOx, NOx and particulates of engines burning LNG. These factors led Terntank to specifically choose the low emissions Wärtsilä 5RT-flex50DF engine with WinGD’s X-DF technology for their new ships.

Further details may be found by watching the video below