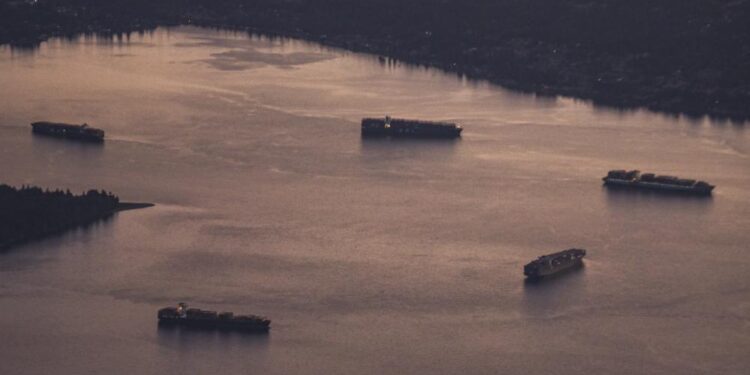 The Coast Guard continues to monitor container ships anchored in the greater Puget Sound area due to a logistics backlog affecting the entire West Coast of the U.S. and Canada from Los Angeles to Prince Rupert, British Columbia.

This unprecedented backlog has resulted in a greater number of ships, in particular container ships, using anchorages in Puget Sound.

Several factors determine what constitutes a suitable anchorage, particularly for a vessel the size of the large container ships that typically transit through Puget Sound ports.

The Salish Sea and Puget Sound is blessed by deep waters. This helps us avoid disasters of ships running aground with potential oil pollution. However, the deep waters limit the number of locations we can use for anchorages. Container ships have gotten larger since some of our anchorages were established, and as a result, many of the anchorages are no longer suitable for these ships

Holmes Harbor, off Whidbey Island, is one such federal anchorage in the Code of Federal Regulations. Because of lack of capacity available elsewhere, it is currently serving as an anchorage location. Even though Holmes Harbor is a designated anchorage, USCG does not generally need to use Holmes Harbor. This is similar to several other anchorages, such as Bellingham Bay and Port Gardner.

What is more, Coast Guard Sector Puget Sound has received a number of reports of excessive noise and lights from vessels anchored at various anchorages in Puget Sound.

Vessels do not run their propulsion engines unless it is excessively windy (gales and above) and need to use propulsion to avoid dragging anchor. Reports of low-hum noise are likely due to generators, which container ships have to use to produce electricity

The ships should not be using bright halogen or similar type lights. Deck lights, however, are necessary for the safety of personnel. The pilots discuss light usage before they leave the vessel, and the Coast Guard makes a nightly broadcast over the radio to remind vessels to use minimal lighting.

Now, Sector Puget Sound is working closely with Puget Sound Pilots in reviewing criteria that determines which vessels can use specific anchorages.

The Captain of the Port is encouraging container ship stakeholders such as the Northwest Seaport Alliance, the Pacific Merchant Shipping Association, the Port of Seattle, Port of Tacoma, and terminal operators to develop new processes for container ship queuing to manage vessel arrivals efficiently and reduce the demand and load on anchorages