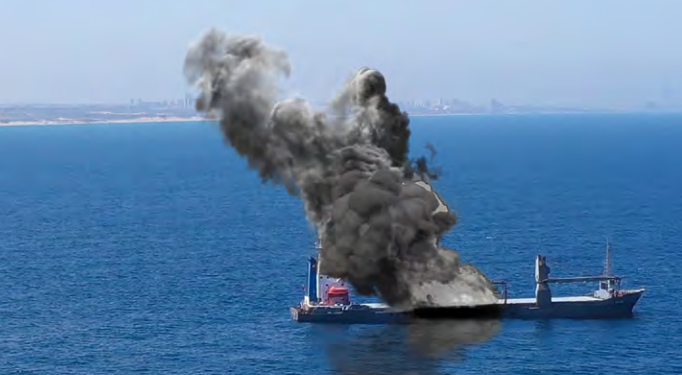 In its recently issued Monthly Safety Scenario, the Swedish P&I Club focuses on a case where a containership suffered fire due to misdeclared cargo.

Crew members closed the covers of the vents for cargo hold 3 and no crew member entered the cargo hold.

Meanwhile the Master navigated the ship to a nearby anchorage. After various checks had been performed, the Chief Engineer released the contents of almost 200 CO2 cylinders into cargo hold 3. This discharge was the designated full complement of CO2 required for the hold, and appeared to extinguish the fire.

As explained, salvors boarded the vessel the following morning. Shortly before midnight, temperature checks were completed by the vessel’s crew indicating that the temperature in cargo hold 3 was rising so five more CO2
cylinders were released.

In the morning another 20 CO2 cylinders were released. The salvors entered cargo hold 2 and measured the temperature for the bulkhead to cargo hold 3 – it was 80°C. Therefore, it was decided that cargo hold 3 should be filled with water from the fire hydrants.

The water filled up three container tiers and after a couple of hours the salvors considered the fire to be extinguished. The container where the fire started was not declared as dangerous cargo, but in fact was actually loaded with calcium hypochlorite and had been misdeclared by the shipper.

The charterer had loaded the container as per the rules of the IMDG code. As per the manifest, the container was allowed to be loaded in the cargo hold, but as the cargo was calcium hypochlorite it should not have been loaded below deck or in the position it was stowed in.

When discussing this case please consider that the actions taken at the time made sense for all involved.

In light of the above incident, Swedish P&I Club recommends shipowners and operators to not only judge but also ask why you think these actions were taken and could this happen on your vessel?