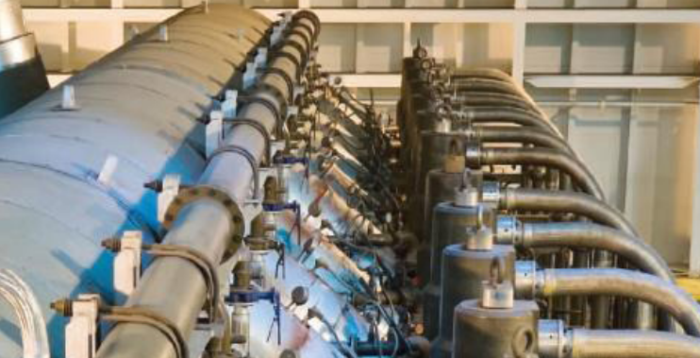 Above image is used for illustration purposes only /Credit: Swedish P&I Club

In a recent publication examining the most regular causes of engine damage onboard, the Swedish Club describes a case of lube oil contamination caused by forgotten rubber membrane seals in the engine room of a chemical/oil tanker.

The ship was at anchor off Tenerife. During overhaul work, a large amount of seawater entered the engine room bilge from the inert gas system overboard drain line. This was later estimated to be around 25 cubic metres.

Unfortunately, the crew had no knowledge of the problem until one of them rushed into the engine control room and said that he had seen water in the engine room bilges.

I was surprised to find out that the inert gas system abnormality alarm had been disabled by a member of my engine room team ten days earlier, which is why we didn’t know what was going on,

Whilst all this was happening, there was a Class Surveyor onboard carrying out an Annual Survey. The crew were told afterwards that three bilge high level alarms had gone off, but because of all the confusion, with all of the alarms being tested, the duty engineer simply did not notice them which further delayed any action to mitigate the consequence of the flooding, the Chief Engineer explained.

There was so much water that it spilled over from the aft bilge well in the engine room compartment and filled the tank top area which was under the main engine crankcase oil pan.

Following this, the crew discovered that the water had got into the main engine crankcase lubricating oil sump tank, as one of the seals in the crankcase oil outlet must have been defective.

This should never have happened – the crankcase oil outlet should be tight and only allow crankcase lubricating oil to drain from the main engine oil pan into the sump tank.

When all this was happening, the main engine was not running and so we avoided contaminating the whole engine with seawater. Unfortunately, later we realised that the oil lubrication pump had been in operation, and sea water had contaminated the engine lube oil system.

A few days into the voyage, the crew checked an oil sample with onboard test-kit, which indicated some water in the lube oil. On arrival at destination, a service engineer from M.A.N Primeserve came onboard and found some light corrosion, but, in the end, the no. 1 and no. 2 lower cross head bearing shells had to be renewed as they were damaged due to corrosion.

The flooding of the engine room was unfortunate but caused no direct damage. Typically, there will be water on the tank top in the engine room when a major sea water pipe starts leaking, a valve is mistakenly operated or when a vessel is under repair at a shipyard and bilge cannot be disposed of, explains Peter Stålberg, Senior Technical Advisor, Swedish Club:

What really caused the problem here was the defective rubber membrane seals between the engine crank case and the lubrication sump oil tank below the engine. I regret to say that this is a classic incident, and we see one or two cases of this type every year.

In most occurrences, he noted, the water ingress into the lube oil sump tank is not noticed and the engine is operated with contaminated lubrication oil.

Usually, crosshead and main bearings are damaged by means of wear and corrosion and need replacement. The cost for these claims is often in the region of USD 350,000.

Despite repeated member alerts and service letters from the engine manufacturers, many owners have failed to implement maintenance routine in the vessels Planned Maintenance System (PMS). The rubber membrane seals should be checked and replaced every five years in connection with the vessel’s special survey.

It is important to ensure that an engine room alarm system is working 100%. Manufacturer’s instructions must be strictly adhered to and service instructions should be incorporated into the vessels’ PMS.