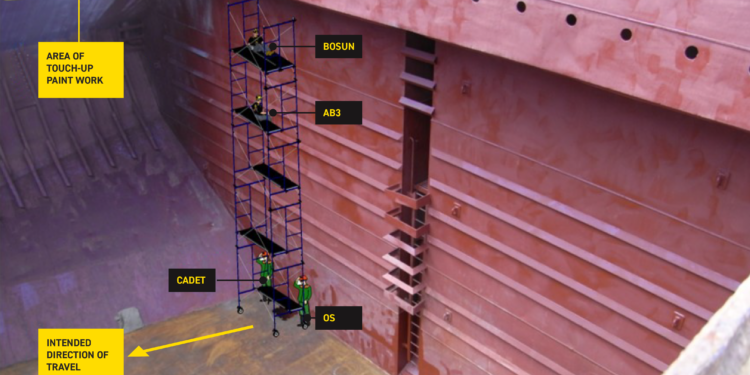 Hold No.4 showing the position of scaffold tower, crew members and direction of movement / Source: ATSB

As part of its BSafe campaign, the Britannia P&I Club shared lessons learned from a serious injury of two crew members after falling from a mobile scaffold tower, while painting the cargo holds, onboard a bulk carrier.

The investigation identified absence of formal supervision and safety equipment, as well as lack of the manufacturer’s identification plate in the scaffolding.

A geared bulk carrier was at anchor awaiting a berth while the ship’s crew were carrying out routine duties, including painting work in cargo holds No.1 and 4. At about 0830 the C/O, the bosun, two able seamen (AB2 and AB3), the ordinary seaman (OS), and the deck cadet began work in No.1 hold. This required them to use the ship’s portable modular scaffold tower in order to access the upper aft bulkhead and topside tank about 6 to 9m above the tank top.

The crew members assembled five sections of scaffolding, which were held by two guy ropes that had been run up out of the hold and secured on deck. The C/O, as the supervisor, oversaw the work from the tank top and the bosun and AB3 painted from the scaffold tower. Both were wearing safety harnesses with safety lines secured on the ship’s main deck. The remaining crew members (AB2, OS and cadet) were assisting, which included handling the security and safety lines.

As each section was completed, the tower needed to be repositioned to access the next area. To do this, the bosun and AB3’s safety lines were released and they climbed down from the scaffolding. The scaffold tower’s securing lines were then released and it was repositioned and resecured. The bosun and AB3 then climbed up the tower, resecured their safety lines, and restarted painting. This was the process that was followed all morning and by 1130 the work in hold No.1 had been completed. The scaffold tower was disassembled and moved to hold No.4 ready for work to begin there after lunch.

At 1300 the bosun, AB1 (who had replaced AB2, who was now on duty on the bridge), AB3, the cadet, and the OS went to hold No.4, while the C/O was resting. As before, the bosun and AB3 painted from the scaffold tower (Figure 3) while the remaining crew members assisted.

A similar work sequence to that in hold No.1 was followed. However, this time when the scaffolding was moved, the bosun and AB3 remained on the tower while the OS and cadet repositioned it. Unlike in the morning, neither the bosun nor AB3 wore safety harnesses or used safety lines.

After they had finished on the aft bulkhead, the bosun decided to touch up the hopper tank edge. He instructed the OS and cadet to move the scaffold tower forward so that they could reach the topside tank surface; the AB3 was aware the tower would be moved.

The cadet and OS released the tower securing lines and went down into the hold to move the tower. At about 1410 they released the wheel brakes and started to push the structure forward. The tower moved about 0.5m when it suddenly toppled forward onto the deck along with the bosun and AB3.

The bosun and AB3 were later airlifted by helicopter to hospital. The bosun received multiple injuries to his pelvis, chest, and arm and AB3 sustained a fractured sternum and back injury. They remained in hospital for 19 and 8 days respectively.

Subsequent inspection of the scaffolding identified that it had no manufacturer’s identification plate, and all components showed signs of regular use, wear and tear, damage, and some repairs. 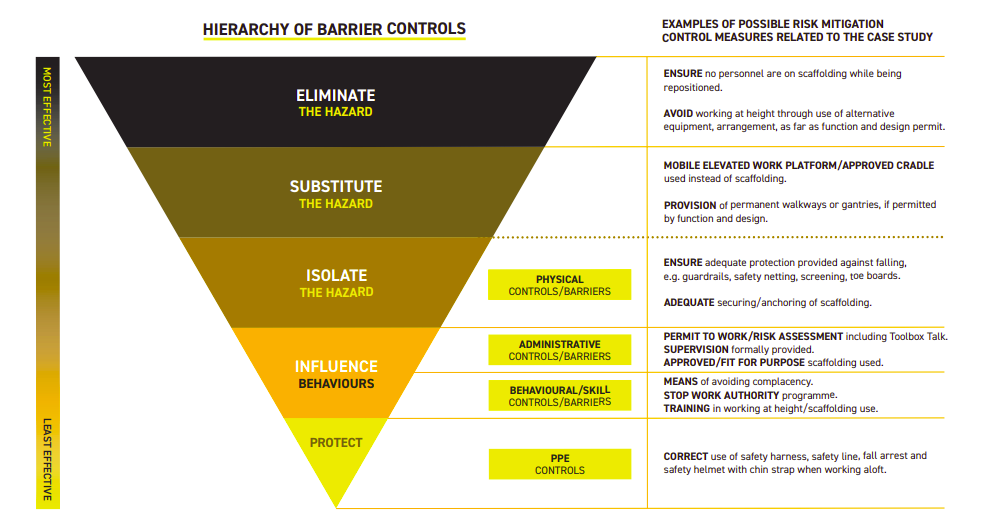 Shipping and aviation are subject to the Paris Agreement, legal analysis shows