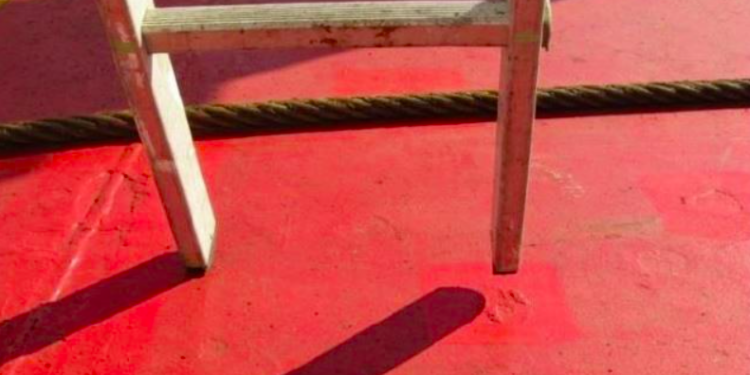 The feet of the ladder in the accident location / Credit: AIBN; USCG

An AB onboard a product tanker suffered severe injuries after falling from a portable ladder, while conducting maintenance work on the launching system for the ship’s free-fall lifeboat and later tragically died from his injuries. The Britannia P&I Club described this case study as part of its BSafe campaign.

A product tanker was on route from South Korea to Los Angeles. As the crew was preparing for an announced USCG inspection to take place while alongside in Los Angeles, it was found that a lashing turnbuckle for the ship’s free-fall lifeboat was defect due to corrosion, as the securing pin was seized.

The chief officer informed both the bosun and the AB about the work and instructed that it should only involve the removal of the remaining rust and painting of the turnbuckle. The bosun was also told that the AB was to assist the rest of the deck crew in cleaning activities once the task was completed.

No work permit was issued as the work was planned to take place at a height of about one metre above deck and in an area fitted with railings.

The chief officer carried out a verbal risk assessment of the maintenance job together with the two bosuns on board, and advised that due to the ship rolling moderately no working aloft would be allowed.

While performing the job, the AB observed that the forward hook on the davit of the free-fall lifeboat needed lubrication. Having finished the work on the turnbuckle, he approached the bosun and asked him to assist him with lubricating the forward hook by steadying a ladder he had positioned on deck below the lifeboat forward hook. The height from the deck to the hook was about 4.8 metres. The ladder was equipped with rubber feet at the bottom of each leg.

However, the feet were significantly worn and were not both in firm contact with the deck. Despite the ladder being unstable, it was not secured by any other means.

The AB climbed up the ladder, reportedly not wearing any PPE. The bosun tried to stop him, but he continued to assist by holding the ladder while the AB ascended. Having climbed part of the way up, the ladder suddenly slipped. The bosun was not able to hold the ladder so the AB fell and ending up lying unconscious on the deck.

The chief officer was informed and a stretcher was brought to the incident site and the AB was transferred to the ship’s hospital. The master contacted CIRM Roma for medical advice and later also the ship’s agent requesting possible assistance from the USCG to carry out a medevac. However, the agent confirmed that a helicopter would not be able reach the ship for several hours.

Two and a half hours after the incident the AB stopped breathing. Although defibrillation was initiated, this was sadly unsuccessful and half an hour later the AB was pronounced dead onboard.

Based on findings from the Accident Investigation Board Norway – AIBN, the following lessons learned have been identified:

In this case, the ladder was evidently in poor condition with the anti-slip material fitted on each of the ladder’s legs significantly worn and, therefore, not effective. This would have contributed to its feet not being in firm contact with the deck and therefore making the ladder unstable. Had the AB and Bosun applied their professional knowledge and expertise to verify that the ladder was both in a suitable condition and safely secured before the work started, this could have helped prevent the incident,