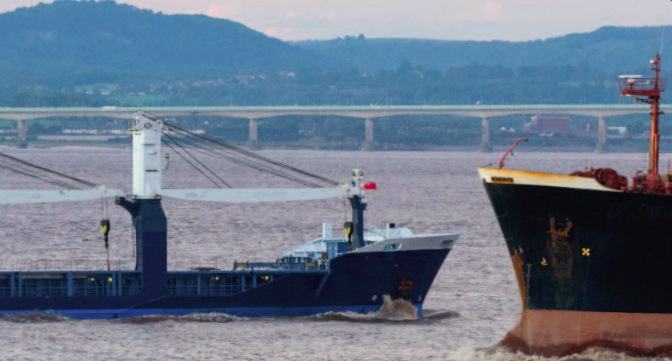 Vessel A was a small general cargo vessel sailing at night in a busy area in the Baltic Sea, with good visibility and a speed of about 10 knots. The S-band ARPA radar was set up in off centre, range 12 NM, north up, in relative motion mode, while the X-band radar was on standby. Both radars had similar blind zones as the masts were positioned close to each other on the ship’s upper bridge. The bridge equipment included an ECDIS, which the Master who was on the 8-12 watch was monitoring. A lookout was also on the bridge.

There were a number of vessels astern of vessel A. Five minutes before midnight, the Second Officer came to the bridge for his night watch. During the handover, the Master informed him about the vessels which were astern and advised that they were being overtaken by a number of them.

After the handover, the Master left the bridge. The Second Officer was aware of a vessel overtaking them on the portside but was not aware of vessel B also overtaking them, but on the starboard side. He switched the radar between centred display to off-centre several times. The lookout was on the port bridge wing.

The Second Officer was monitoring the ARPA Sband radar, when he noticed a target astern on the starboard quarter – it was very close. This was vessel B and it was one minute from collision and only a few cables away.

The officer turned around and looked out through the aft starboard bridge windows. Vessel B was almost on top of them. He tried to call the Master but could not reach him. He then switched to manual steering and altered hard to starboard which was towards the overtaking vessel, and the vessels collided.

Soon after the collision, the Master came onto the bridge. He noticed that the engines were still full ahead and the rudder was hard to starboard, but the vessel was not turning. He reduced the engines to 60%. Vessel A was not moving. Vessel B had struck vessel A on the starboard side in way of cargo hold 2.

The Master saved the VDR. However, only the Xband radar was interfaced with the VDR and as that radar was in standby mode, radar screenshots of the developing close quarter situation had not been recorded by the VDR.