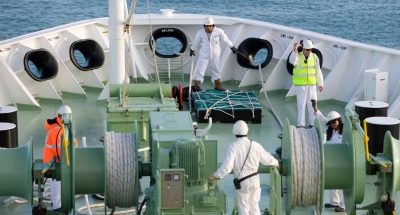 Lost anchors are the root causes of many groundings and collisions and the crew and officers need to be aware of the risks and assess them thoroughly, especially in heavy weather.

The Gard P&I Club has developed the following case study for onboard safety meeting:

A container vessel was about to enter port. The wind gusts recorded outside the breakwater were in excess of 60 knots and because of the heavy wind, the master decided to delay berthing until the weather improved.

The bridge team considered the options of slow speed steaming or anchoring. The master was of the view that remaining underway for a potentially long period of time would incur additional fuel costs, so he decided to anchor in the bay.

The vessel reached her anchoring position which was quite exposed to wind and waves. The port anchor was let go and cable was veered to eight shackles in a depth of 35 metres. The starboard anchor was then lowered onto the seabed to reduce the anticipated yaw of the vessel, and the crew were ordered to “screw the brakes up and put the bars across” on both windlasses.

The seabed was a combination of sand and rocks. “Both windlass brakes have been applied – secured.” The master wrote his night orders, which instructed the OOW to call him if the anchor dragged, and left the bridge.

At the time the master left the bridge the wind was south-westerly 40 knots and the vessel was yawing between 190° and 260°. The significant wave height was considered to be 2.5 m and the speed of the current was 2.5 m/s.

Later that same night, the extent and speed of the yaw increased as the wind strengthened until the port anchor cable rendered through the windlass following a particularly violent yaw to starboard. The OOW informed the engine room that the engines should be started immediately, and called the master.

The master used a combination of engine and bow thruster movements to ease the weight on the cables during the recovery of the anchors. 20 minutes later the starboard anchor was aweigh and the anchor party began to weigh the port anchor. It was now reported that the port anchor cable had rendered while being recovered, and that the windlass had been damaged as a result.

It was later confirmed that the windlass’ dog clutch had been destroyed and the drive shaft was bent. The vessel was then lying to the bitter end of the port anchor cable – and not being able to retrieve it. The bridge team consulted the available company guidance and considered the options for slipping the anchor cable.

The master contacted the DPA, and the decision was taken to await an improvement in the weather conditions before making a further attempt to slip the cable. The starboard anchor was again walked out to the seabed to reduce the yaw.

When port anchor later was weighed it was found that the anchor was lost together with the shackle pin of the D-shackle. The port authorities later demanded removal of the anchor at owners’ expense.

Based on the case and the keywords below, you should now perform an onboard risk assessment of the incident and the factors which led to it. Bear in mind the company’s SMS procedures when answering the questions. Please also discuss the following questions in order to increase awareness;

• Are your brake bands in good order, and do you know how to adjust them?

• Can your chain stoppers hold the anchor chains from running out in all circumstances?

• Are the chain stopper hinge pin and securing pin in good condition and not excessively worn?

• Do you secure the brake handles by a lashing?

• Are the lashing devices (turnbuckles, wire, chain, hooks etc.) for tightening up the anchor in good condition?

• Do you know that such lashing devices are not supposed to hold the anchor alone?

• Do you check and tighten the lashing devices and the brake bands during the voyage?

• Do you have an instruction manual for the operation and maintenance of the anchor windlass?

• Consider the frequency and content of the inspection- and maintenance routines for the anchoring system on board your vessel.