How to ensure safe carriage of containers in bulk carriers 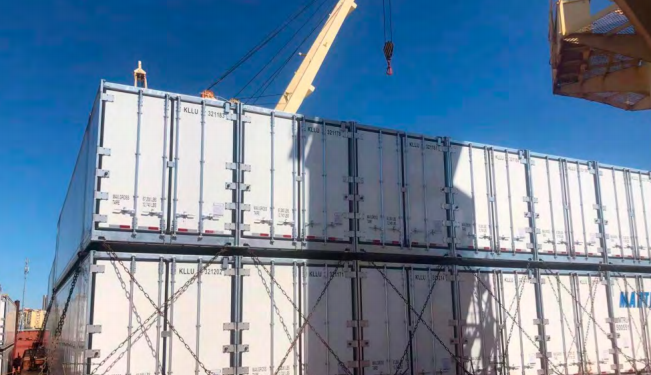 Bureau Veritas has developed a formalized approach to support the safe carriage of containers in bulk carriers.

Carriage of containers in bulk carriers is possible but only after extensive planning, assessment and scrutiny. Operators must liaise with their insurance carriers, Class society of their vessel(s) and corresponding Flag Administration for advice and guidance on the necessary modifications and/or additions to satisfy relevant requirements.

However, the fact that bulk carriers are indeed “not specially designed and fitted for the purpose of carrying containers” combined with the potential need to maximize the intake of containers, creates issues of concern related to the integrity of the vessel’s structure and the cargo itself as well as the safety of the crew and the stevedores.

Type of Hath Covers and size of hatch way opening

Normally, folding type hatch covers are providing a bigger length of hatchway opening in respect to side rolling type. The length of the hatch way is important. The optimum goal will be to have big enough hatchway length to facilitate the loading/unloading and enough (clear) space in holds (bhd stool) in order to load 2 bays of FEU (or 4 bays of TEU). Attention to the additional space (length) needed for lashing equipment and working space for stevedores.

Side rolling Hatch Covers railways extending transversally at deck side, may complicate the container deck arrangement.

Attention is drawn to SOLAS II.2/10.7.1, whereby, as required and for ships > 2000 GT, with or without Dangerous Goods, cargo holds shall be protected by a Fixed Fire extinguishing system.

The selected bulk carrier to have Loading Conditions with “Deck/Hatch Covers cargo” in the Loading Manual. If there are not such loading conditions, additional intact and damage stability requirements are applicable. Two cases exist as follows:

• Vessels with type B freeboard: Such vessels will already have a probabilistic damage stability calculation as per SOLAS II-1 Part B requirements and a “Minimum GM Curve” established and included in the vessel’s stability documentation. For these vessels the extra windage area due to the deck stowed containers is to be taken into account in the intact stability calculations.

• Vessels with type B-60 freeboard: Such vessels will need to develop the Minimum GM Curve as per SOLAS II-1 Part B probabilistic damage stability requirements. This curve is to be applicable when the vessel will be carrying deck cargo. In addition, as per the above case, the deck containers windage area is to be taken into account in the intact stability calculations.

A consulting office will have to prepare all needed files as above and submit them to BV for review.

This greatly depends on the vessel’s cargo hold and hatch geometry, as well as on the scantlings of the inner bottom, deck and hatch covers. Based on Bureau Veritas experience the following guidance figures can be used for an initial estimate:

Above figures are indicative for loading option 21 and depend on the design options, stack weight, stack VCG, loading condition GM, loading condition Hull Girder Stresses. For the number of bays, sufficient space to be considered for the lashing arrangement and stevedores working space. For the number of tiers on decks and hatch covers, the IMO visibility requirements are to be taken into account.

For carriage of packaged Dangerous Goods, BV address the following:

For stowage / exact location of the Dangerous Goods on board the ship, IMDG code applies (out of Class scope).

Attention to be paid to dangerous goods segregation requirements, IMDG code applies (out of Class scope).

Assuming that the bulk carrier has a Document of Compliance (DoC) for carrying Dangerous Goods, then this carriage of Dangerous Goods shall be in compliance with the available/allowed list of dangerous goods (for packaged goods).

In the case the ship does not have a DoC for carrying Dangerous Goods, then a BV Surveyor should verify onboard the relevant vessel characteristics, to process the data in the BV Software for Dangerous goods and issue the relevant DoC and associated list of dangerous goods (packaged goods).

Even with ships equipped with a DoC, BV Surveyor attendance and verification will be needed if new equipment is to be installed in order to include new classes of dangerous goods (packaged goods) in the available ones.

We would suggest owner to run a simulation for issuance of a DOC Dangerous Good within BV VDGB Software in order to see which categories of cargo can be loaded and which equipment is missing.