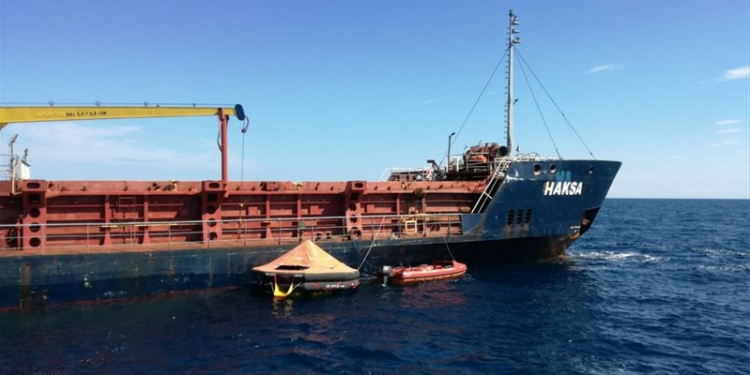 Credit: Croatian Ministry of the Sea, Transport and Infrastructure

Eight crew members were evacuated form the Turkish cargo ship ‘Haksa’, after she suffered a water ingress in its engine room, while underway in the Adriatic Sea, off Croatia, near the island of Jabuka, on Sunday, according to data provided by the Ministry of the Sea, Transport and Infrastructure of Croatia.

At the time of the incident, the 85 meters long “Haksa” was carrying a total of 13 crew members, eleven Turkish and two Indian, who sent a distress signal at about 4.25 am, reporting the water ingress. Search and rescue forces from Croatia and Italy launched a SAR operation and alerted all nearby vessels.

As the Italian-flagged tanker ‘Valcadore’ was sailing at about 4 nautical miles form the scene, it rerouted and was dispatched in rescue of the Haksa crew.

At 06.30, the evacuated 8 crew members of the heavily loaded Turkish ship were transferred from the ‘Valcadore’ to the Naval Police ship and transported to Split’s port city. The rescue boat of the Port of Split stayed at the scene, cooperating with the remaining 5 Hakse crew, including the Captain, to keep the ship afloat until the arrival of other rescue units.

There is no marine pollution as a result form the accident, but authorities are standby as the ship is carrying 3000 metric tons of magnesium sinter and contains about 70 tons of propulsion fuel and lubricants, the Ministry said.

The ruptured hull was temporarily sealed and the ship will be towed to Brodotrogir shipyard in Trogir for repairs.