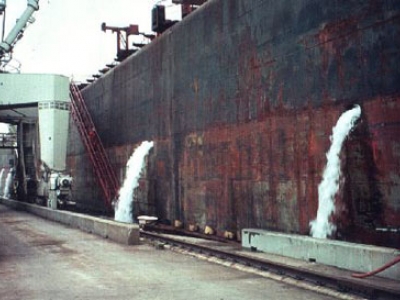 Safety Alert by the West of England P&I Club

The West of England P&I Club has issued a Safety Alert regarding Cargo Damange due to Water Ingress from Ballast Tanks and Bilge Lines.

Incidents resulting in damage to dry cargo following water ingress into the holds from ballast tanks and bilge lines continue to arise. Such claims are usually costly, and separating damaged goods from the rest of the cargo can often cause delay. Moreover, when cargo has been damaged by salt water, the salved value may be minimal and disposal may be necessary, adding to the magnitude of the claim

Water from ballast tanks may enter adjacent cargo holds via a number of different routes:

Damage to the hold structure

This may be caused by cargo operations, for example, due to grab damage to tank top plating or hold pipework on vessels carrying dry bulk cargo. Similarly, container vessel tank tops may be damaged by containers which are landed heavily or if lashing material becomes trapped between tank top and the container base.

This may involve plating where localised corrosion is so severe that holes have appeared, or ballast tank air and sounding pipes in holds where the blind side of pipework close to the adjacent steelwork has corroded unchecked due to the difficulty of examining this area and removing rust scale. Where inspection of the pipework within a hold is problematic this should be conducted during each dry docking period.

This may be due to failure of the gaskets or the presence of debris preventing a suitable seal when manhole covers are refitted, or when manhole cover securing nuts and bolts have not all been replaced or properly tightened.

This may be due to valves between the ballast main and hold or overboard drop valves not being closed, or when blanking plates have not been properly fitted to the suction/filling arrangements within the hold when the system is not in use.