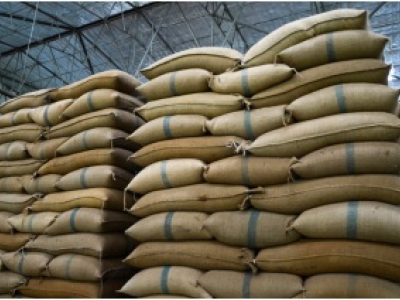 The bulk carrier was in southeastern Asian port loading bagged parboiled rice. The temperature was over 40oC and the sea temperature was over 30oC. . A surveyor was present during the loading. He tested the rice and the moisture content was precisely on the acceptable limit.During loading it rained a couple of times and the bags which were on a dunnage system got wet as there was no protection against the rain and the stevedores didnt stop loading in time. The surveyor didnt test the bags that had been exposed to rain.

The cargo was loaded up almost to the cargohatch cover, so air circulation was limited in thehold. After completing the loading the cargoholds were fumigated with phosphine.

The first four days of the voyage the cargoholds were under gas and then the hatch coverswere opened and ventilated as per best practice.The engineers started to heat some of the bunkerin the double bottom tanks under cargo hold 3,4 and 5. Cargo hold 5 was the most aft cargohold and the settling and service tanks were inthe most forward part of the engine room withthe bulkhead just adjacent to cargo hold 5. Thetemperature in the tanks became over 70C

During discharge it was found that some of th cargo was discoloured and there was also some moisture damage and caking to the rice. The extra heat from the bunker combined with the moisture content caused the rice to be microbiologically unstable.

The cargo receiver refused to accept a majority of the cargo and the vessel was delayed for a couple of days. The caking of the bags was caused principally by the vessel's condensation, which was aggravated by inherentrly high moisture content in the rice.