by Ansuman Ghosh
in Opinions, Safety 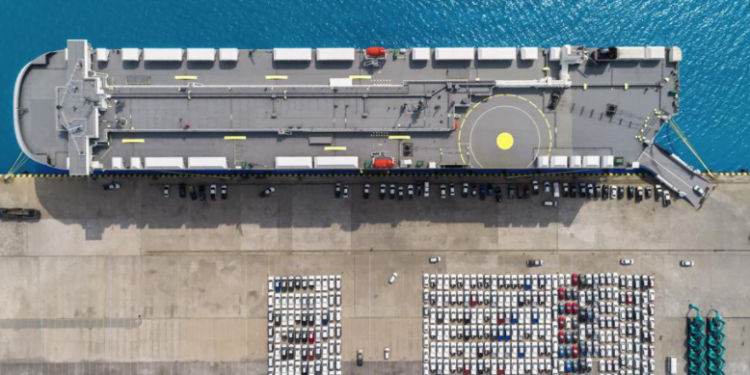 With this growth and demand has come an increased awareness operationally of the risks involved with transporting EVs on ro-ro and ro-pax vessels. Many ro-ro vessel operators are already carrying EVs and alternative fuel vehicles with a cautious approach. In October this year, the Maritime and Coastguard Agency issued a consultation document regarding the safe carriage of EVs and charging facilities on ro-pax ferries, so the safety concerns are clearly being considered on a wider level throughout the maritime industry.

Clearly, these new car types are not inherently unsafe, but, when any new technology is introduced, there is always a potential for unintended consequences, and it is important for every stakeholder to understand the risks to mitigate them effectively.  It is timely, therefore, to consider recent case studies of fires on ro-ro vessels, along with the associated safety and risk aspects that should be highlighted during operation, especially with consideration to EVs.

How to enhance leadership onboard: Changing the culture bottom-up

Over recent years there have been numerous fires on vehicle carriers, some of which have been attributed to faults in the vehicles being carried onboard. The outcome of these vehicle carrier fires have, in the main, been significant. We have summarised a few of these incidents below.

On the MV Honor in February 2017, a fire in the upper vehicle deck was attributed to a fault in the starter motor solenoid in one of the vehicles being transported. The fire led to extensive damage to the Honor’s vehicle decks as well as its cargo of about 5,000 vehicles.

In May 2018, a fire started on the 11th deck of the Auto Banner. The fire was alleged to have been caused by the over-heating of one of the used vehicles on board. The fire was cooled by helicopters dropping water from the air and more than 40 fire engines spraying the hull. The entire crew of 28 were safely evacuated without any reported injuries.

Grande America suffered a fire in March 2018 and subsequently developed a starboard list, causing it to capsize and sink in a depth of around 4,600 metres. The resulting oil spill stretched for 10km and the ship was carrying 2,000 cars and 365 containers, of which 45 were deemed to hold hazardous substances.

Sincerity Ace caught fire in the Pacific on New Year’s Eve 2018 with more than 3,500 cars onboard.  The crew had to abandon the vessel, and whilst 16 crew were rescued, five tragically died as a result of the incident.

In June 2019, Diamond Highway had to be abandoned by its crew in the South China Sea, due to fire, whilst carrying 6,354 cars. Thankfully, all 25 crew were rescued.

The above are just a few examples of the catastrophic effect of fires onboard car carrier vessels and they serve to illustrate the importance of thorough safety procedures and adequate fire-training. With regards to transportation of EVs, as numbers increase it will no doubt become evident over time where the principal risk factors lie with these vehicles.

Why are EVs different from standard motor vehicles?

To consider the risks involved with carrying EVs in particular, it is worth understanding the technology of their design which makes them different to conventional petrol and diesel vehicles.

There are three types of EVs:

EVs rely on being recharged from an external power source, typically a specialised charge point, and are the greenest way to drive, with no tailpipe emissions. Plug-in hybrid electric vehicles (PHEVs) usually have a smaller battery than a pure-EV, but also have a conventional petrol or diesel powertrain. A PHEV can run on the engine alone, and even use the engine to top up the car’s battery, but are most efficient when used in electric mode as much as possible. Although rare, hydrogen fuel cell vehicles (FCEVs) are also classed as electric cars. They do not require charging, and refuelling only takes a few minutes, similar to refilling at a petrol station. However, this needs to be done at a dedicated refuelling site.

As technology progresses it is clear that battery sizes in electric cars will continue to increase; there has been continuous technological advancement in terms of storage, driving range and charging speeds for the battery. This fast-paced technological advancement creates challenges in terms of battery manufacturing quality. Additionally, these high-performance energy storage systems must be intrinsically tolerant of all conditions, including overcharge, short circuit, fire exposure, mechanical shock, and vibration.

Lithium-ion cells and batteries play a dominant role in portable applications and have now entered the field of automotive applications. If a lithium-ion battery catches fire, it can result in temperatures exceeding 1,000 °C. In recent trials, large amounts of water was found to be an effective fire-fighting agent, primarily as the cooling effect prevented vehicle components from catching fire. As with most fires, battery fires also produce highly toxic gases.

The following are all potential risk scenarios that could arise when transporting EVs:

In addition, a lithium-ion battery exposed to temperatures above 150 °C from a surrounding fire might start to discharge toxic gases with possible ignition. In case of a fire in the vicinity of a FCEV it is possible for the pressure to increase in the hydrogen tank from an external temperature increase. A significant amount of hydrogen could then escape forming flammable mixtures which could be ignited by non-explosion-proof equipment, such as lamps and fans.

To date, the safety of charging EVs on carriers has not been widely discussed, however as this is an area on which the UK Maritime and Coastguard Agency are currently consulting it is clearly an area to which consideration needs to be given.

Operational changes that could minimise risk

It is important to inform the crew of the risks the vehicles present and to adapt the personal protective equipment onboard accordingly. Moreover, it is important for the crew to know where such vehicles are located onboard. EV and PHEV/FCEV vehicles must be clearly marked on the stowage plan so that emergency services can act accordingly. The training and equipment (protective clothing, respiratory protection, and possibly thermal imaging cameras) of the rescue workers might need to be adapted to these risks.

Unfortunately, sprinkler systems are located above cars from the deckhead (ceiling) down, so would have a marginal effect on cooling lithium-ion batteries as they are located close to the car floor. In the case of fires involving EVs, it is especially important to cool down the material that is on fire as well as its surrounding area. This requires large quantities of water. Therefore, to avoid endangering the stability of the ship with the extinguishing water, ensuring the unhindered runoff of the extinguishing water is of great importance. Another important factor in this regard is that the runoffs must be kept free from burnt material and cargo. High pressure water mist systems seem to be particularly suitable due to their inerting and cooling effect, so these systems are preferable for battery fires.

Watch-keeping and fire rounds are essential to keep a close eye on damaged cars, coolant leakages, indications of heat, and venting. Use of thermal imaging scanners by the cargo watch-keepers is suggested, and some vessels are provided with CCTV cameras for monitoring which can lead to early detection.

A quick muster, decision making, and effective teamwork can ensure a fire is under control quickly before it spreads. EV and PHEV/FCEV vehicles should be transported in special areas equipped with appropriate detectors, fire extinguishing equipment, and fire extinguishing agents. In the case of a fire, the possibility of separating vehicles by means of a water wall or mobile partitions could be explored.

which escape from faulty batteries at the earliest opportunity makes it possible to locate and fight fires at their earliest stage. Escape of hydrogen on a closed or even a semi-open deck can easily lead to an explosion followed by a fire. For this reason, it is recommended that fuel cell-powered vehicles operated with hydrogen should exclusively be transported on open loading decks. It is also important to note that spaces where hydrogen can escape must not be protected by a CO2-based fire suppression system, as CO2 when being discharged, may ignite hydrogen.

Fuel cell vehicles present a special risk if hydrogen is used as fuel:

The hydrogen is stored in the vehicle tank under high pressure. When heated strongly, for example due to a fire on the same deck or the one below, the pressure in the tank will increase until the overpressure relief valve opens and the hydrogen is discharged. Since hydrogen is lighter than air, it will primarily collect under the deckhead (ceiling) of the vehicle deck and could cause an explosion. Currently prevention of explosions are targeted at gases that are heavier than air and require appropriate explosion protection on vehicle decks only for installations near the deck (floor).

As EVs are still relatively new, there is limited available data regarding their potential fire risk. Until reliable data is available it is recommended that owners adopt a cautious policy for the EVs carried onboard. Fighting fires in EVs introduces new challenges of which the crew should be made aware and for which they should be specially trained. Fires in battery packages are difficult to put out but they can be cooled by use of water, and leakage from a hydrogen fuelled vehicle is not very likely but, if ignited, will cause a fire with a high heat release rate.

There are number of areas where further investigation is required, such as the ideal state of charge of the batteries, effectiveness of different combinations of fire detection, gas detection and fire-fighting installations in areas which might be used specially for the stowage of electric vehicles. In the days ahead, with further reliable data and investigations, there might be additional design changes and operational requirements. It is important to keep in mind however, that although the technology driving the cars being carried on ro-ros is changing, the existing ro-ros will probably not undergo any substantial design changes in terms of firefighting capability or fire detection. Unfortunately, industry regulations are frequently slow to respond to developing market trends, and so the onus will be on the operating procedures for ships and their crew to mitigate this new risk.

Above article has been initially published in UK P&I Club’s website and is reproduced here with author’s kind permission.

Ansuman Ghosh is a Marine Engineer with the UK Club’s Loss Prevention department based in Singapore. Ansuman sailed on various vessel types up to the rank of Chief Engineer. In 2006, he came ashore, working as a Superintendent and Classification Society Principal Surveyor, Regional Lead Auditor. Prior to joining Thomas Miller, he was Technical Head at a ship-owning and service company. Over 10 years with leading classification society in Singapore with responsibilities ranging from on-board surveys, new buildings, dry-docking and management system audits. Extensive experience in Health, Safety, Quality, Environment and Energy management systems audits on Gas Carriers and Tankers. During his time at Class Society, Ansuman was also involved in number of repair, major modification, retrofit projects and management system verifications involving FPSO’s, Jack ups, Semisubmersibles and various types of Offshore Support Vessels.