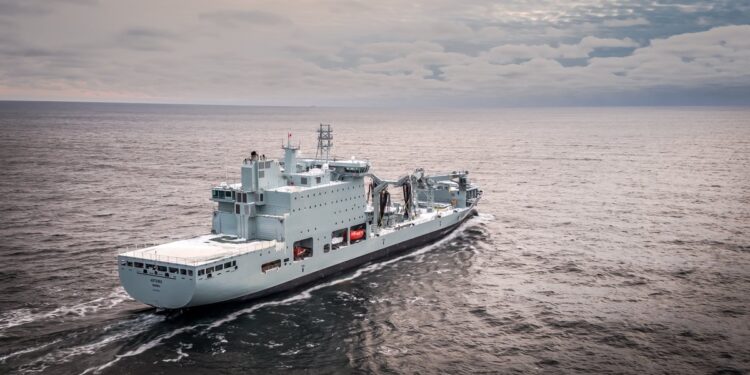 Canadian Davie Shipbuilding announced that it has completed the construction, commissioning and sea-trials of the first Resolve-Class Naval Support Ship, to enter national naval fleet. ‘Asterix’ will also be the country’s ‘greenest’ ship and features, amongst other environmental innovations, Terragon of Montreal’s MAGS 8 waste management system.

The ship departed Québec City 23 December 2017 en-route to Canadian Forces Base Halifax, where she will enter service with the Royal Canadian Navy and be operated by Federal Fleet Services Inc.

Upon arrival in Halifax, the ship will welcome aboard members of the Royal Canadian Navy to begin integration training during the month of January 2018 prior to supporting Canadian naval operations from February 2018, for the next 10 years.

The delivery of Asterix represents the first new naval support ship to enter service with the Royal Canadian Navy in over 50 years. It is also the first large naval platform to be delivered from a Canadian shipyard in over 20 years and the first naval ship to be delivered since the launch of the National Shipbuilding Strategy.

“The delivery of this ship is an innovation showcase for Canadian industry and marks an important new era in Canadian maritime power, for it once again allows the Royal Canadian Navy to independently deploy globally for combat, peacekeeping and humanitarian operations, ” said Spencer Fraser, CEO of Federal Fleet Services Inc.

The Resolve-Class Naval Support Ship, Asterix, was designed by Rolls Royce and meets the highest and most stringent of NATO and Lloyds Register requirements to support military operations, specifically for its primary Replenishment-At-Sea functionality but also in terms of systems redundancy, damage control, ammunition storage and other systems onboard.