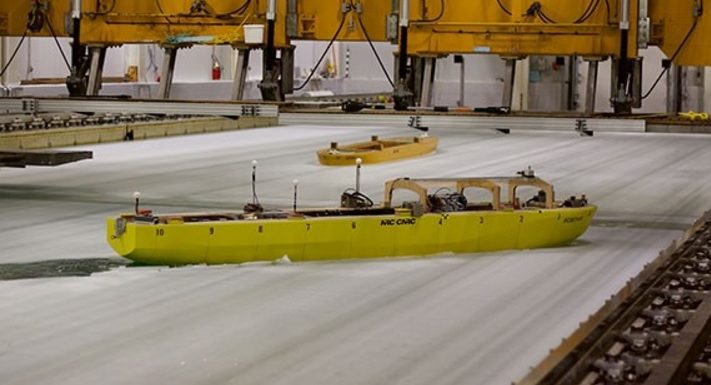 Canada, US to advance icebreaking technology

The government of Canada announced the cooperation with United States, focusing on the testing and evaluation of design models for the US heavy polar icebreaker acquisition program. The results of this partnership are expected to boost the knowledge and expertise of both countries in icebreaking ship technologies.

Specifically, on 26 July, the National Research Council of Canada (NRC) hosted dignitaries from the US Coast Guard (USCG), US Department of Homeland Security (DHS) Science & Technology Directorate, and US Navy to discuss and showcase progress made. During this phase, the NRC is conducting environmental characterization of ice conditions using physical modelling from its ice tank.

The testing is assessing the models’ maneuverability in ice and icebreaking resistance, building baseline requirements for new U.S. heavy polar icebreakers, and expanding the current design and operational knowledge.

The collaboration benefits the two countries, as they both engage in research for improving technology of icebreakers, according to Iain Stewart, President of the NRC.

“Our knowledge of how ships and offshore structures can operate in harsh environmental conditions combined with our world-class research facilities and expertise positions Canada as a strategic partner in providing safety and efficiency to the new U.S. polar icebreakers”, he noted.

The Canadian and US governments are also working on the long-term management of the polar icebreaker’s hull integrity, which they will assess through field trials.

"The data we gather from model testing at the NRC is going to be a major driver of our heavy polar icebreaker acquisition program's success and will be critical to our efforts to effectively manage costs, mitigate risks, and maintain an accelerated program schedule."

This partnership was formalized through the Critical Infrastructure Protection and Border Security (CIPABS) Agreement, managed by the Defence Research and Development Canada’s Centre for Security Science (DRDC CSS), an Agency of the Department of National Defence, on behalf of the Government of Canada, alongside DHS S&T who manages it on behalf of the U.S. Government.