The Canadian Minister of Fisheries, Oceans and the Canadian Coast Guard, Jonathan Wilkinson, announced that the Coast Guard will be provided with six new program icebreakers to replace its current, old fleet of icebreakers.

Namely, the Canadian government launches a competitive process, through an Invitation to Qualify, to add a third Canadian shipyard as a strategic partner under the National Shipbuilding Strategy (NSS). This new shipyard will build the new program icebreakers for the Coast Guard. 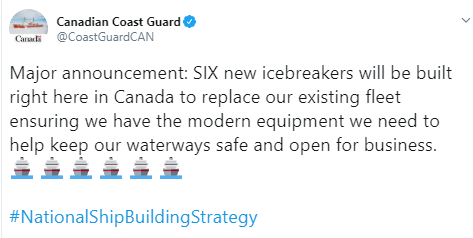 In general, the icebreakers are of a great importance to Canada's economy, by supporting year-round marine trade in Eastern Canada, the St. Lawrence waterway and the Great Lakes. The icebreakers provide assistance to the eastern Canadian ferries when they operate during winter, and also to Canada's commercial fisheries. The program icebreakers will also support the annual re-supply of goods to Canada's Arctic communities and industries, concerning northern residents.

By adding the new program icebreakers to renew the fleet, we are ensuring the women and men of the Canadian Coast Guard have the equipment they need to deliver icebreaking services in the Arctic, on the St. Lawrence waterway and on Canada’s East Coast.

In the meantime, the climate change affects the Canadian communities, resulting to the Coast Guard having higher demands on a safer shipping.

Canada supports a safer shipping and an enhanced marine environment. Recently, the Canadian government launched the Wrecked, Abandoned or Hazardous Vessels Act, which forbids vessels abandonment and also adds into the Canadian law, the Nairobi International Convention on the Removal of Wrecks, 2007.