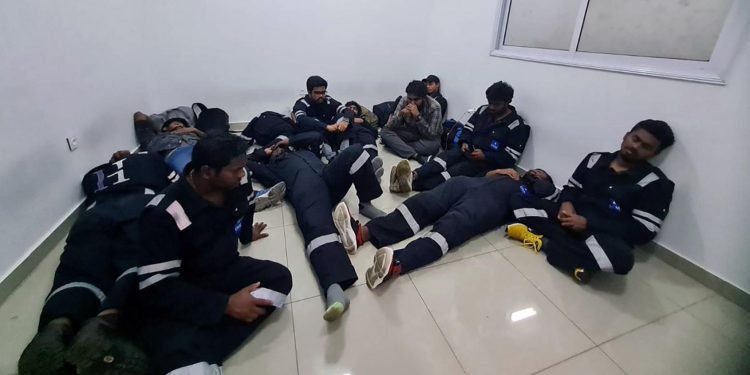 After the ship MT Heroic Idun was arrested by authorities of Equatorial Guinea at the behest of Nigerian authorities for alleged theft of crude oil from Nigeria, the 26 crew members on board are reported to have experiencing an extremely stressful period.

On 8 August 2022, the Heroic Idun arrived at Akpo offshore terminal operated by TotalEnergies. According to the Maritime Association of Ship-owners Ship managers and Agents (MASSA), upon arrival, it turned out that not all Nigerian National Petroleum Corporation (NNPC) clearances and Navy clearances were in order.

Due to a change to the security plan and a request to leave the terminals’ Marine Exclusion Zone (MEZ), Heroic Idun complied and moved 10 – 15nm from the terminal. During the evening an unidentified vessel approached the Heroic Idun, several parties were contacted to try and confirm the identity and intention of the vessel without success, and it was assumed to be an attack by pirates.

Heroic Idun implemented measures according to BMP WA and left the area on a westerly course within the Equatoguinean EEZ. The approaching vessel did not provide confidence that this was a legitimate Navy vessel (AIS off), and the plead to provide more time to gain confirmation was not accommodated.

The Heroic Idun had successfully escaped what was thought to be an act of piracy. However, later it was confirmed to be the Nigerian Navy Vessel Gongola intercepting Heroic Idun due to the missing (NNPC) clearances and accused Heroic Idun of attempted oil theft.

On 14 August 2022, Heroic Idun was approached by the Equatoguinean navy and, at the vessel’s request, escorted to Malabo, Bioko, Equatorial Guinea and subsequently to Luba Bay, where the vessel was detained.

As MASSA further explained, the seafarer are being interrogated over the past 3 months, and have now been moved under the jurisdiction of Nigeria, for further queries and investigation.

Taking all of the above into consideration, MASSA called for the seafarers aboard the concerned vessel to be protected from criminalization of any sort, and that they not be “allowed to fall victim to any hasty summary judgment not backed by a proper enquiry, while keeping in view at all times the seafarer’s rights as enshrined in the globally accepted terms of the Maritime Labour Convention.”

The association also hopes that the detained seafarers will not be subjected to any undue stress nor duress, and that any enquiry in this regard will be fair and transparent, with seafarers treated fairly as resolved by IMO.

In the same wavelength, the Nautical Institute expressed that it “is shocked and appalled by the recent interception and apparently unlawful detainment of the Marshall Islands-flagged tankship Heroic Idun in the EEZ of São Tomé and Príncipe by authorities in Equatorial Guinea and Nigeria.”

We are currently making appropriate representations to help establish the emerging facts, clarify options with regards to legal assistance, and determine how else The Nautical Institute may be able to contribute quickly and effectively to the safe release of the vessel and its largely Indian crew

Commenting on the case, Gard CEO, Rolf Thore Roppestad, highlighted that “the treatment received by the crew shows a blatant disregard for basic human rights and international law. They have been held for more than 80 days, without any charges and without any  legal representation locally to protect their interests. The situation is quite frankly outrageous.”

Nigeria must recognise the complete lack of evidence in this case and free the crew immediately. Their arrest, continued detention and possible lengthy legal battle is a complete miscarriage of justice