The IMO’s landmark BWM Convention, adopted as early as 2004, entered into force two years ago, on 8 September 2017. So far, ships have had to comply with the Convention’s D-1 ballast water exchange (BWE) requirement, but the requirement for ships to have ballast water treatment systems (BWTS) installed as a method of compliance with the D-2 ballast water performance standard was delayed by two years. The first date on which ships will be required to have BWTS fitted will therefore be 8 September 2019.

As such, between 8 September 2019 and September 2024, the BWM Convention will reach the second phase of its implementation where all ships will have to conform to the D-2 standard.

In other words, after 15 years, the Ballast Water Management Convention is coming into full effect from this September.

At the same time, across the Atlantic, important developments have also been taking place in relation to the USCG’s BWM regulations which entered into force on 21 June 2012.

With over 20 BWTS now issued with USCG type approved certificates, the USCG has hardened its stance on extending Alternate Management System (AMS) certifications and extensions to ships which have reached their implementation deadlines.

The Vessel Incidental Discharge Act (VIDA), enacted at the end of last year has however, raised hopes for more harmonisation of the USCG’s BWM regulations with the IMO’s BWMC and with the regulations of other US States.

The IMO Convention took over thirteen years to enter into force, and enforcement of the USCG’s ballast water performance (BWP) standard was continuously postponed from June 2012 due to there being no USCG type approved equipment.

In regard to the above developments, the UK P&I Club issued a Legal Briefing, summarizing some of the more significant developments associated to the two regulations.

For example, a potential lack of harmonization between the two legal frameworks has been a key area of concern for ship operators and regulators over the last years.

Manufacturers who have conducted tests on their own systems will therefore still have to pass the presumably more stringent independent tests in the US. It is possible that not all manufacturers of IMO type approved systems will be prepared to submit or re-submit their systems for USCG approval. Until an IMO type approved system has received USCG approval, the system remains unapproved, and so there will continue to be BWMS which are approved by the IMO but not by the USCG, at least in the foreseeable future, 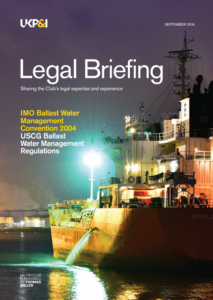