The Australian Transport Safety Bureau (ATSB) issued an investigation report on the grounding of the bulk carrier 'Orient Centaur', which lost power while transiting a channel from the Port of Weipa, in November 2017. This incident highlighted gaps in the port’s risk plans, ATSB noted.

On 6 November 2017, the fully laden, mini cape-size dry bulk carrier 'Orient Centaur' was transiting the South Channel, Weipa, Queensland, outbound under the conduct of harbour pilots as part of a trial introduction of this size of ship to the port.

While in the South Channel, the ship’s main engine shut down due to a loss of water from a cracked engine cooling component, and propulsion was lost.

Under the guidance of the harbour pilots, three tugs were used to successfully refloat the ship. The ship was subsequently towed out of the channel to an anchorage.

Surveys conducted over the following days identified that the ship did not sustain any damage.

The ATSB found that the approval process for this size of ship had only considered the risks associated with a main engine failure before the departing ship’s entry into the narrow South Channel.

Consequently, the tugs were not in attendance to assist if propulsion was lost.

Additionally, the port risk assessment did not require the use of an escort tug for any ships transiting the South Channel during outbound voyages, and the tug masters had not been trained in the specifics of escort towage nor in emergency response.

Tugs were to be available to escort the mini cape-size ships until they had entered the South Channel, where they were stood down. However, the tug masters had not been trained in the specifics of escort towage nor in emergency response,

Meanwhile, at the time of the incident, it was unlikely that an emergency response to a pollution incident in the Port of Weipa would have been initiated in a timely manner.

Subsequently, appropriate proactive action has been taken to address the emergency response issues.

However, the investigation highlighted that the actions of the pilots, ship's crew members and tug masters following their arrival at the ship were timely and significantly reduced the consequences of the occurrence.

The introduction of this size of ship to the Port of Weipa was preceded by identification, and risk assessment, of a number of hazards. However, aspects of tug escort and the potential for malfunction of the heavily‑laden ships within the confined channel were not considered.

This occurrence highlights the importance of considering potential hazards from end to end in order to provide the best opportunity to manage safety risk, 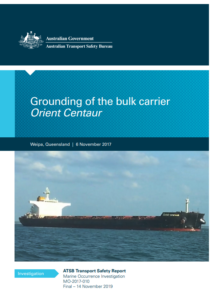