The US National Transportation Safety Board (NTSB) issued an investigation report on the contact of the bulk carrier 'Shandong Fu En' with the Ergon-St. James Terminal Wharf, on the Lower Mississippi River, in April 2018. The report highlighted poor judgement resulting from fatigue as key cause of the incident.

About 0637 on 6 April 2018, while turning around to head downriver with the assistance of three tugboats, the bow of the bulk carrier Shandong Fu En struck Dock 1 of the Ergon-St. James Terminal wharf at mile 160.7 on the Lower Mississippi River during high-water conditions.

The Shandong Fu En, loaded with coal, had just departed the Convent Marine Terminal wharf, located across the river at mile 160.9.

No pollution or injuries were reported, but the vessel and the wharf sustained $6.25 million in damage.

The National Transportation Safety Board determines that the probable cause of the contact of bulk carrier Shandong Fu En with the Ergon-St. James Terminal wharf was the fatigued pilot’s misjudgment of a downstream turning maneuver during high-water conditions.

According to the three towboat captains who assisted the Shandong Fu En, three assist tugboats―maybe even four―were the usual number necessary in high-water conditions to safely move a vessel such as the Shandong Fu En off the dock and turn it around.

However, after the bulker came off the dock, the river current quickly began to move the vessel toward the right descending bank and downriver. The towboats could have been positioned differently and the full-astern engine orders could have been executed earlier to keep the bulker from drifting.

The pilot had completed this maneuver dozens of times previously and was familiar with the challenges of the river being at high-water stage and running at more than 5 mph. The purpose of work/rest rules, like the rest period regulations for the NOBRA pilots, “is to promote rest and recuperation between periods” of work.

Rules and regulations applicable to mariners do not stipulate the amount of sleep they should acquire before standing watch or serving as a pilot. Instead, the rules focus on providing an opportunity to sleep.

During rulemaking to address work/rest regulations, the Coast Guard described rest periods as time a mariner would “be allowed to sleep” and said rest included providing mariners with hours away from work so they can “sleep without being interrupted.”

Internationally, the IMO emphasizes that “seafarers are [should be] provided with adequate sleep opportunity” and that “duty scheduling and planning is a key factor in managing fatigue.” Allowing and providing mariners an opportunity to sleep does not guarantee that they will.

Even for experienced pilots, fatigue can affect performance in various ways, such as increased reaction times, reduced alertness, and difficulty processing information.

It can, therefore, degrade a person’s ability to stay alert and attentive to the demands of safely controlling a vessel. Despite the pilot’s 96-hour work/rest history showing he complied with regulations, he had only 4 hours of sleep in the 36-hour time span before the accident.

The pilot’s limited sleep and the fact that he was nearing the end of an 8-hour shift increased the likelihood that fatigue affected his judgment while directing three tugboats and maneuvering the Shandong Fu En in challenging high-water conditions.

Pilot organizations have recognized that even for experienced pilots, fatigue can degrade performance especially in challenging conditions aboard deep-draft vessels. Since the accident, the NOBRA Board of Examiners instituted new procedures to mitigate the risk associated with operating deep-draft vessels in high-water conditions on the Mississippi River. These procedures include increasing the sleep opportunity for pilots by 1) lengthening the time between turns from 8 to 12 hours, and 2) reducing the work hours for attended moored vessels from 8 to a maximum of 6 hours per shift. They also include limiting pilot transits and mooring operations to daylight hours. 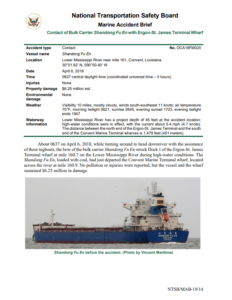